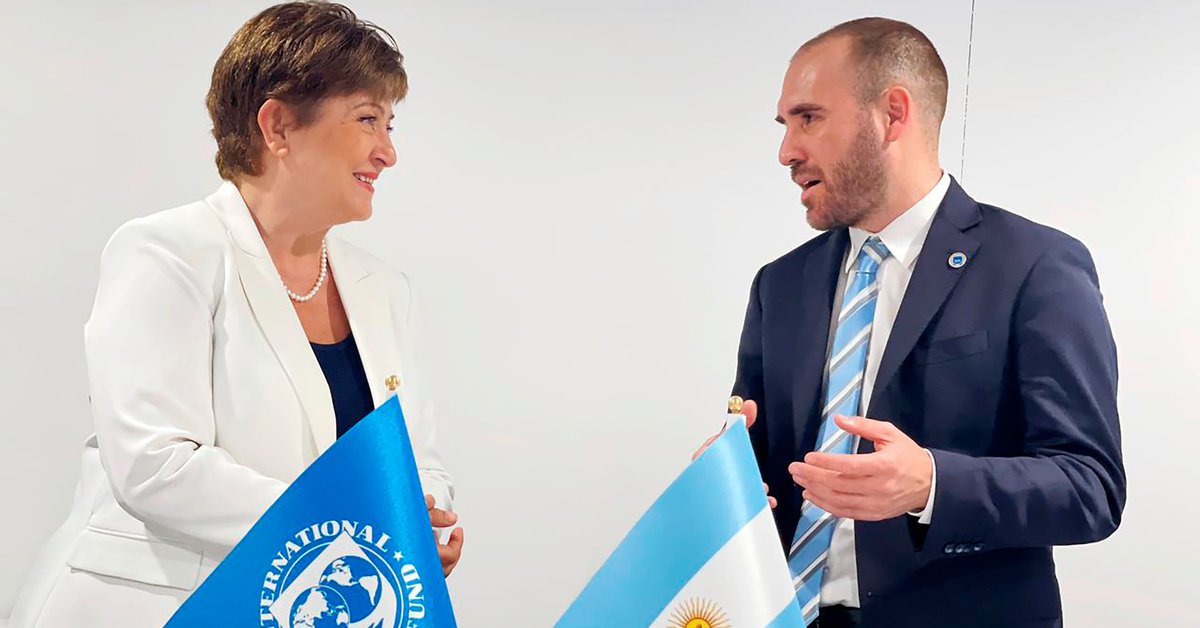 The International Monetary Fund improved the growth projection for the Argentine economy and estimates that the GDP this year will have a recovery of 6.4%, while three months ago it calculated an improvement of 5.8 percent. Anyway, slightly reduced its expectation of economic progress for 2022 and adjusted it to 2.4 percent.

The IMF updated its global economic projections on Tuesday, in a report in which it estimated that Latin American economies will grow by 5.8%, that is about 1.2 percentage points more than what I calculated in April. The periodic report that the IMF carries out to update its estimates of economic growth indicated that at the global level the organization maintained the 6% improvement that it had measured in the previous April report.

In the case of Argentina, the IMF improved its prospect of economic improvement from 5.8% to 6.4%, although it will not be enough to compensate for the 10% drop it suffered in the first year of the pandemic. For 2022, on the other hand, the outlook was marked down 0.1 percentage points.

The periodic report that the IMF carries out to update its estimates of economic growth indicated that at the global level the organization maintained the 6% improvement that it had measured in the previous April report.

As mentioned by the agency during a press conference, lThe improvement in the international prices of raw materials, which implied a higher income from tax collection and foreign exchange, an advance in trade with partner countries and a faster rate of vaccination than expected by the IMF were the factors that explain the recalculation of the estimate for 2021, considered the deputy director of the Department of Strategy, Policy and Evaluation Petya Koeva Brooks.

According to the Monetary Fund, however, there are different trends depending on the size of the economies. Among advanced countries, for example, the Fund projects higher growth than it expected three months ago due to the advance in vaccination against the coronavirus. In April it had estimated a 5.1% recovery (after a 4.6% drop in 2020) and now it stretched that number to 5.6 percent. For emerging markets, it lowered it from 6.7 percent to 6.3 percent.

Within this last group there are differences. The countries of Latin America had an improvement in the official estimate of the Monetary Fund: it went from 4.6% to 5.8% for this year, although they would not compensate for the overall 7% decline in the 2020 region. Brazil would grow 5.3% and Mexico 6.3%, the report mentioned.

The periodic report that the IMF carries out to update its estimates of economic growth indicated that at the global level the organization maintained the 6% improvement that it had measured in the previous April report. REUTERS / Yuri Gripas / File Photo

One of the novelties for Argentina could come from another route. The IMF considered that one of the recovery factors of the world economy will be the acceleration in the vaccination rate. For that, he considered that one of the tools that the body has is the mechanism of distribution of special drawing rights (SDR), the currency of the IMF, which the board will discuss next Monday.

Its approval will imply the disbursement of $ 650 billion to all member countries of the organization. Argentina, in particular, would USD 4.3 billion for owning about 0.7% of the “shares” of the Fund. It is in this aspect that a new possibility opens up for emerging economies such as Argentina.

The countries of Latin America had an improvement in the official estimate of the Monetary Fund: it went from 4.6% to 5.8% for this year, although they would not compensate for the general 7% drop in the region in 2020.

An article written by the IMF’s chief economist, Gita Gopinath and published also this Tuesday opened the door for there is a kind of “secondary” redistribution of these SDRs from the richest countries to the poor and emerging ones, a claim that the Argentine Government has been making in different international forums to achieve greater funding for middle-income countries. Martin Guzman He raised it two weeks ago in the framework of the G20 ministerial summit.

“A blanket allocation of special drawing rights (SDRs) equivalent to USD 650 billion (USD 250 billion for emerging and developing economies), as proposed by the IMF, should be completed quickly in order to provide liquidity buffers for countries and help them meet their essential expenses, ”said Gopinath.

But then he added that “the impact can be magnified even more whether rich nations voluntarily funnel their SDRs to emerging market and developing economies”. The phrasing is different from the one used by the agency in its latest statements, in which it spoke of a distribution mechanism from advanced countries towards “vulnerable” countries, without further details.

READ:  What is Amazon Prime Wardrobe, the new service that lands in Spain

An article written by the chief economist of the IMF, Gita Gopinath and also published this Tuesday, opened the door for there to be a kind of “secondary” redistribution of these SDRs from the richest countries to the poor and emerging ones.

As explained by sources from the Argentine delegation that participated in the G20 summit of ministers and central bankers, that mechanism for an additional distribution of special drawing rights is not yet determined and it will be a debate that the governments of the main countries will have to hold from now on, so it is not expected that it will be an initiative that could benefit emerging countries – including Argentina – in the short term.

Regarding inflation, the Monetary Fund raised its concern because “the recent pressures on prices reflect for the most part unusual developments related to the pandemic and transitory mismatches between supply and demand,” said the global outlook report.

Georgieva and Guzmán at their last meeting in Venice, within the framework of the G20 ministerial summit.

“Inflation is expected to return to its pre-pandemic ranges in most countries in 2022 once these shocks make their way through prices, although uncertainty remains high. High inflation is also expected in some emerging market and developing economies, partly related to high food prices”, He explained.

This argument was one of those used by the Government to explain that the year-on-year price increase in Argentina has exceeded the expectations set in the budget projection, and also mentioned that other countries such as Brazil, Mexico or the United States also failed to meet their inflation targets this year.

According to sources from the Argentine delegation that participated in the G20 summit of ministers and central bankers, this mechanism for an additional distribution of special drawing rights has not yet been determined.

“Access to vaccines has become the main fault line along which the global recovery is divided into two blocks: those that can expect further normalization of activity by the end of this year (almost all economies advanced) and those who will still face resurgent infections and death from COVID on the rise. But nevertheless, recovery is not assured even in countries where infections are currently very low as long as the virus circulates elsewhere”Mentioned the IMF report.

Regarding the global rate of vaccination, Gopinath mentioned that an IMF proposal “establishes the objective of vaccinate at least 40 percent of the population in all countries by the end of 2021 and at least 60 percent by mid-2022, in addition to guaranteeing adequate diagnoses and treatments at a price of 50,000 million dollars ”.

“To achieve these goals, countries with vaccine surpluses must share at least 1 billion doses of vaccines in 2021, and vaccine manufacturers must prioritize deliveries to low- and lower-middle-income countries,” said the Fund’s chief economist. .

Alberto Fernández and Cristina Kirchner bet on the promises of Vladimir Putin and the payment of the debt with the IMF to win in the elections
Cristina Kirchner launched the Frente de Todos campaign with a nod to the IMF while the opposition monopolizes the centrality
The IMF’s harsh forecast for Argentina and all emerging countries: after the pandemic they will have to face structural reforms
Cristina tries to bring peace of mind to the dollar: she ruled out a default with the IMF