This is how you should identify a quality shortbread, according to Fátima Gismero, one of the best pastry chefs in Spain 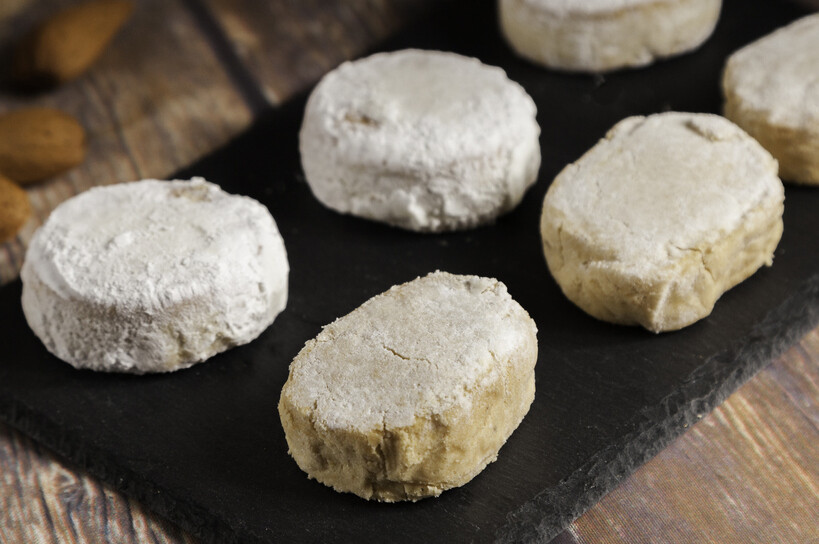 In 2021, the Castilian-La Mancha pastry chef Fatima Gismero was crowned as Madrid Fusion Revelation Pastry Chef and, since then, through his shop in Píoz (Guadalajara), very close to the Madrid border, he has not stopped receiving travelers who have decided to stop at his pastry shop.

Faithful to the Christmas pastry tradition and to her own family legacy (she is the daughter and granddaughter of pastry chefs and pastry chefs), Gismero has also focused on Christmas sweets, including the preparation of two different polvorone options: almonds and hazelnuts, which In addition, this Christmas they form part of a pack with a Guadalajara accent with the 5th Year wine from Finca Río Negro.

For this reason, we have thought it convenient that a professional from the pastry world tell us what we should pay attention to when identify a good shortbread from a bad shortbread and, as is logical, it also ends up that what is cheap ends up being expensive for us in qualitative terms.

The classic ‘choking’, its texture, smell and even color They are going to be the clues that we must look at to know if a polvorón is better or worse, in addition to not giving its approval to most industrial polvorones, except for El Toro polvorones.

Polvorones that are too fine, white or the same usually mean poor quality polvorones.

As in a wine tasting, the color and appearance of the polvorón are also decisive. Gismero rejects those “too equal”, as they are a sign of industrial production and he prefers that they have certain irregularities. Furthermore, he explains that a powder that is too white is not a good sign either.

“Should have a certain color due to the toasting of the flour and the nutsnot be pale or white”, he indicates and also considers that this nuance of the slightly irregular cut is a guarantee of what is traditional and handmade.

A polvorón can fall apart a bit, but not fall apart. If this happens it is a sign of poor quality.

If you are sick of polvorones that crumble as soon as you take them out of the package and that start to crumble in your hands, bad business. “A polvorón must have texture and of course it must be delicate, but You have to be able to catch it and make it break when it is going to bite or melt a little in your hands, but not crumble,” he explains.

In addition, in his opinion, this qualitative profile is reflected in the price and in the raw materials. “A good handmade polvorón, just like an artisan nougat, It can’t be cheap because ingredients and labor are expensive.“, he reflects.

Fátima Gismero and the almond and hazelnut polvorones that she has put up for sale in 2022.

Read:  Will Superman wear a new suit in Man of Steel 2? A Fan Art imagines how Henry Cavill should dress

“It should only have four ingredients: nuts, flour, lard and sugar“, he specifies and “if the butter is bad, it smells too much of pork, but if it is good and the shortbread has been made well, it smells toasted and dried fruit.”

For this reason, he clarifies, it is essential that “everything is well toasted and that the polvorón mixture is made the same day that both the flour and the nuts are toasted” and, he adds, “that the wheat flour is not dehydrated or simply left to dry, but that it is really cooked.”

Choking on a shortbread because it is a lump of flour is a bad sign. For this reason, Fátima Gismero is clear that “even if it is floury, It should be creamy and should not leave a greasy feeling in the mouth. because that is a sign of being poorly integrated and of having too much sugar”.

“When they are so floury it is because they have a lot of sugar and that is why it is good that they cook for less time and at a lower temperature. In addition, in our case we incorporate pieces of dried fruit. Granillo for the almond ones and chopped hazelnut for the almond shortbread. it’s about finding textures and chewing,” he says.

“You should savor the dried fruit and perceive the tone of toasting of the ingredients; not having the feeling of eating a raw product or just a mixture of flour, sugar and fat “, she exemplifies.

“For me, a polvorón should be made of nuts, so if they have few nuts in the ingredients, get angry,” he considers. I would also discard polvorones that have a very high percentage of sugar.

“Must explain the type of fat that the polvorón has and, when it is of quality, it is Iberian lard. If they don’t put Iberian pork or they only put fat or vegetable fats, it will also be a bad indication “, he continues.

As a finish, aim for sugar and flour. “That make it very clear what flour it is and specify the cereal and not put flour mixtures that are cheaper or the sugar solution to lower costs”, he concludes.

In DAP | How to make oil powders. Traditional Christmas recipe also for vegans
In DAP | Rediscover Christmas with these 31 traditional sweet recipes that you can make at home