Bullfrag
Home News For years it has been said that a child discovered the tomb... 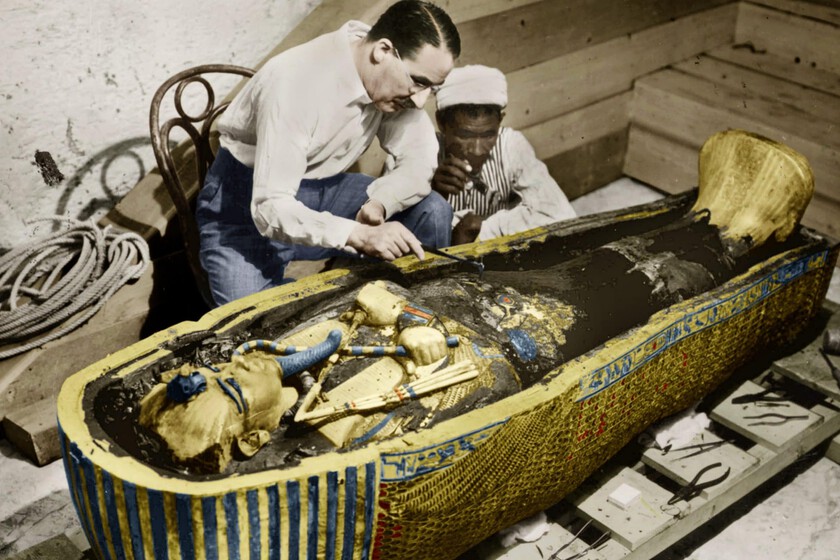 History is not only written by the victors, but also by those whom we identify as an authorized source. Stakeholders, the press and even the plausibility of a story, which changes with the times.

For years it was thought that the all-important find of Tutankhamun’s tomb made it Howard Carter. There is no doubt that he was one of the main promoters of archeology, as well as the leader of the excavations in the Valley of the Kings, opposite Luxor. Nor that it was this Briton who commanded the expedition that November 4, 1922, when the site was found that would change Egyptology forever.

But time has wanted to give a new interpretation of the facts. An addendum to the original account can be found in most current sources, also official. We are told that one good morning the boy who brought jars of water to the team tripped on a stone which turned out to be the beginning of a staircase. According to some he was playing and according to others he was stirring the sand. Discovering what looked like a material molded by the hand of man, he plugged the rock and ran to find Carter to take all the credit.

Thus, over and over again in recent times, the film has changed: it was not a Briton and, in part, a colonizing force, who found the remains of the “child pharaoh”, but a native child by a stroke of luck. The history of Egyptian archeology is pregnant with rapes of doubtful legitimacy and half of the heritage of those lands is kept under lock and key in the British Museum. Returning the credit for the discovery to the Egyptian people through the water boy seems not only plausible, but a historical reparation.

The family of Hussein Abd el-Rassul, who is believed to be the legitimate boy in the jars who worked hand in hand with Carter in 1922. This Sheikh has on occasion posed next to the portrait of a boy who wears the famous Tutankhamun necklace, a dazzling gold matching chain set with five lapis lazuli beetles and inlays of carnelian, turquoise, feldspar and glass. Its value is, of course, incalculable.


Famous portrait of Harry Burton in 1926 to the already known as “water boy”.

The photograph is known to have been made by Harry Burton in late 1926 or the beginning of the new year and it was published in an English magazine a year later. Sheikh Hussein passed away in the late 1990s, and has been identified as the boy who took the photo of the necklace. Why would they let you take a picture with such a precious piece? As a reward for finding the steps to the grave, naturally. Okay, but why would they take a photo four years after finding the step? Why the age that the child in the photo appears does not fit with which Hussein was supposed to have at the time of taking the picture?

The problem is that Hussein has never claimed (or denied) that he was the famous water boy who found the step. And the strangest of all: in no writing from Carter’s time, not in his diary, not in a letter, not anywhere is the allusion to the famous boy in the jar found. What can be read in your travel notebook is the following:

I had barely arrived at my post the next day, the unusual silence that surrounded us, as people had stopped working, caught my attention. I realized that something extraordinary had happened … Beneath the first cabin we approached a path cut into the rock was discovered. It seemed too good to be true, but adding a bit of light revealed that we were at the entrance of a steep cut in the rock….

“It was discovered”, said the researcher, in a fragment that has also turned the scholars of the subject on their heads because they doubted the verisimilitude of the date.

But it is the same: if the famous child does not appear here, where does this anecdote come from? For the following we are going to rely extensively on the writings provided by Nacho Ares, writer and Egyptologist who works for Ser Historia, and Christina Riggs, also historian and Egyptologist who works at Durham University. In both cases they do not grant the slightest legitimacy to the version of the water carrier, or, rather, not with the data that we have at this time.

Read:  Get ready to charge your mobile at 150 W thanks to Qualcomm

The first written version of the adventurous boy appears in the book Tutankhamun: The Untold Story, of 1978 and written by Thomas hoving. Hoving was at that time the “short story writer and controversial” director of the Metropolitan Museum of Art in New York. The best-selling book was written to promote the exhibitions of archaeological remains that took place in those years in the United States. Both the exhibition (seven million visitors) and the book had such an impact that they were also responsible for the tutmania into which the country entered. For the book, the museum director had access to previously unpublished memoirs by Lee Keedick, Carter’s agent in America in the 1920s. Keedick said that Carter had only confessed to him the reality of what happened, and that in private he told her that it was the boy who found that step. The confession passage is, it must be said, quite flowery.

It also happens that Hussein’s heirs they still live on the west bank of the Nile in Luxor and run a café and house-museum near the Temple of Ramesseum. What is honored in this interesting center for tourists who pass by is the discovery of his ancestor Hussein Abd el-Rassul. Hussein was, and this does seem to be confirmed, the son of one of the four rais (or foremen) who worked under Carten in the search for the tomb of Tutankhamun. Today in the cafe you can see the walls covered with newspaper clippings from different times interviewing Hussein as well as the famous photograph of the boy with the royal amulet. In those same interviews, curiously, Hussein only talks about how the photo was takenNot that it was a reward for finding the grave.

Another thing that can be read out there is that Carter, in his lectures presenting his work in the excavation, would have told the anecdote of the water boy already in the 1920s. There are doubts about the existence of a newspaper article that alludes to this made in that period, or even if it was so, if it hadn’t been a note of color from Carter to sweeten the fact. Carter had been caught in the past concocting funny attributions of important discoveries to a donkey and a canary of his.

Interesting is the fact-finding process of Francine Marie David, a Swiss writer and photojournalist who was married for a time to one of Hussein’s grandchildren. After asking the family, one of the Husseins tells him that Carter told the anecdote in 1924, however the source he uses as a reference to accredit this information is the German edition of Hoving’s book, where Carter would have told his publicity agent in private, not in public.

What is interesting about all this? What need is there to dismantle an innocent fable about a water-bearing child who does not bother anyone? Apart from the obvious interest in preserving historical rigor, for Christina Riggs there is something more interesting behind all this:

Why does Egyptology tend to give credit for “discoveries” only to Egyptians if they are children or so-called grave robbers? In the short list of archaeological discoveries that have not been attributed to white men, quadrupeds appear with the same frequency [que los propios egipcios]. I can’t help wondering if a photogenic child seems the “safe” way to acknowledge, and then ignore, the desperate need we have in our field to introduce diverse voices and decolonizing approaches to our research. It seems to me that the most important thing here is not whether these stories and their photographs are verifiable or “true”, but why we want to believe and spread them now.

The “boy in the jar” is a phenomenon in Google that has been constantly growing since 2014 or 2015, an already established part of the entries on Tutankhamun in the prestigious Smithsonian magazine and in academic books in the United Kingdom and the United States. We will also have to think the extent to which Hussein Abd el-Rassul has not already earned a legendary appendage in his own right in one of the pieces of history most wrapped in mysteries and fables of all Humanity.