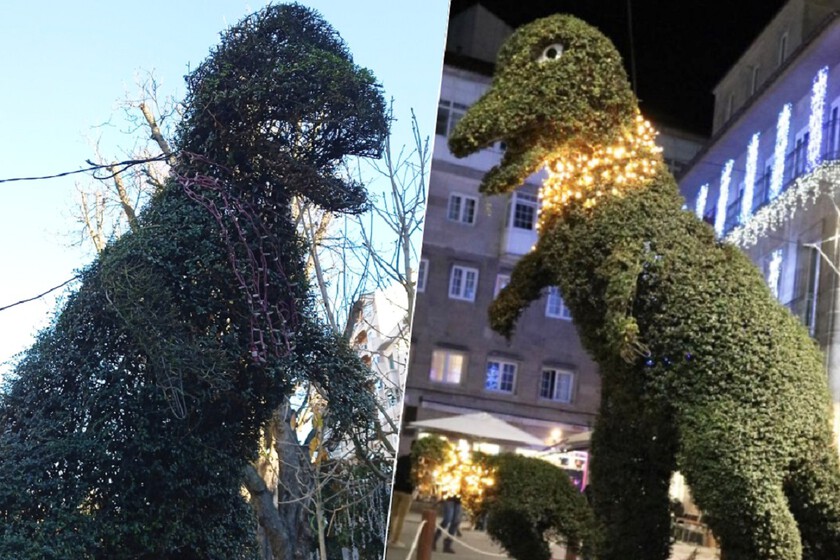 Dinoseto is a somewhat ugly boxwood dinosaur with a disturbing look. But he never lacked for company. It always had a constant flow of visitors taking photos of it (they even had to give it a photocall and a separation, because the excess of onlookers was harming the boxwood). It is a very easy resource to stay in a visible place. And many children want a photo with the dinosaur. His charm knows no generational groups. dinosaur he is an idol whom the people have decided to love.

The Dinoseto story is amazing. It could be said that he is the son of virality on the Internet. The dinosaur, as the mayor of Vigo, Abel Caballero, once said: “is the most photographed monument in Vigo”. A quick Instagram search shows that there are at least 2,442 tagged posts with the hashtag #dinoseto. There are also other similar ones like #dinosetoforpresident, #dinosetotequeremos, #dinosetoputojefe or #dinosetoobsoleto. It even appears on Google Maps as a local tourist attraction.

But the truth is that outside the Internet it is impossible not to find Dinoseto everywhere. He has starred in all municipal campaigns. We saw Dinoseto on posters carrying bags from the sales or celebrating Christmas (the urban buses were full of drawings of dinosaurs wishing happy holidays). A few years ago it was the real protagonist of the cavalcade of the Three Wise Men, with a Jurassic theme. He did not have vacations: during the carnival he was the protagonist of a special sculpture that was prevented from advancing by a ghost called Anti-Vigo. Vigo has become what some call “a dinosetada”.

The fall from grace of the Vigo hero

Now, sadly, the iconic plant sculpture that was the queen of the selfie seven years ago it dies slowly in the Alameda park, in the Plaza de Compostela, where it was temporarily moved due to the works on the Porta do Sol. The upper part of the plant dinosaur, which became a tourist attraction and its image was reproduced on T-shirts and cookies , is completely bare. Against the light, the ornament with the figure of Tyrannosaurus is so transparent that you can see the wire structure that supports the hedges, already dry.

While the leaves on the upper part have fallen, the lower section grows uncontrollably and uncontrollably, turning the bush into a honeysuckle. The same lack of landscaping maintenance is seen in the Dinosetiño, the smaller creature that accompanies the Dinoseto. Everything points to the fact that it was not extinguished due to the impact of a meteorite but rather due to the lack of maintenance of the vegetal ornament, property of the Vigo City Council.

Read:  "Italy is in the place it deserves to be"

The ‘dinosaur’ went from an icon of the city-show to an emblem of the abandonment that everything in Vigo suffers when it ceases to serve as a set for the mayor’s permanent press roll. pic.twitter.com/4pigzXbpwt

Unlike other icons of the past, he continues in his exile in the Plaza de Compostela waiting for someone care about your care. A deterioration that has caused that, coinciding with the seventh anniversary of his appearance on Rosalía de Castro street, “dreadlocks” have grown out on his head, legs and body. Not even the bustle of Christmas, in which they put on a hat and a tie with LEDs, prevented him from being overshadowed by the great Ferris wheel as the new symbol of the city.

It is not the first time that the floral sculpture has suffered maintenance problems, since in its first summer of life it lacked irrigation and pruning despite its significant growth. However, being in a more central location allowed these problems to be remedied quickly.

It will remain in the memory of the city

Dinoseto is, as we pointed out, a symbol. You have to remember when some maintenance workers brought a boxwood sculpture in the shape of a dinosaur to put in a roundabout on Rosalía de Castro street and, although they removed it soon, the photos were already taken and shared on social networks. “It’s a posh area where they didn’t want that thing,” they said in this article in Público. At that time, it was said that everything had been a mistake and that the real destination of the dinosaur was a park in the Navia area.


The very name Dinoseto was coined by netizens, who even shared photos tracking roadside sightings of the boxwood dinosaur as it was taken to a new destination. He was the king of the trending topic and such good material for memes that it was impossible to let him go.

He did not: he ended up in Puerta del Sol itself, the epicenter of the city. She thus began not only her career as a star of social networks, but also as that icon used over and over again by the City Council. Students, families, tourists, Celta players or even the current Prime Minister, Pedro Sánchez, surrendered to the charms of the animal; which also turned out to be a female and that same fall she would lay her first egg. There were also acts of vandalism by those who tried to ride it or hang themselves, becoming its defenders attacked.

Today, Dinoseto dies in front of everyone. And no one has done anything to prevent it. Good luck, little dinosaur…