an easy, quick and nutritious recipe for pasta with a sea flavor 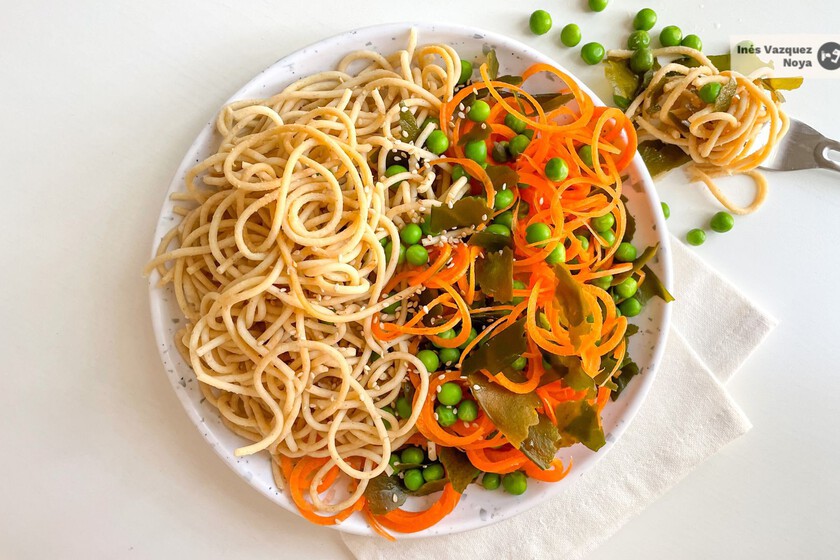 If you enjoy Japanese food and are looking for an alternative to the classic sushi or even if you adore Italian cuisine and are eager to innovate, I propose a fusion of both cuisines. The mixture of spaghetti, kombu seaweed, carrot and peas is remineralizing and very suitable for summer.

The kombu seaweedwith a very characteristic flavor typical of umami, is the total protagonist of the dish, providing all that unmistakable flavor to sea in every bite. The idea of ​​incorporating seaweed into spaghetti is an interesting alternative to include in the recipe book.

Knowing that, in general, it is difficult to include algae in the diet due to ignorance or not knowing how to cook them, this proposal paves the way for seaweed world. By the way, these plant organisms are very important in the diet whether you are vegetarian, vegan or omnivore, for their contribution nutritional and mineral.

In a bowl, put the algae soak for approximately 20 minutes.

Meanwhile, cook the spaghetti according to the package instructions. Once ready, stop cooking under the tap with cold water. Reserve.

Peel the carrots and with a spiralizer make the noodles Reserve.

Then, heat water in a saucepan over medium heat. Add the seaweed and cook for 20 minutes. 15 minutes after cooking, add the peas and carrot noodles until tender.

time to assemble the final dish. Arrange the cooked spaghetti on one side and the seaweed, peas and carrot on the other. Finally, season with soy sauce, olive oil, salt and pepper. Mix the ingredients so that the flavors are well integrated and serve.

Read:  an exhilarating sequel to 'The Cathedral of the Sea' for Netflix that gets right to the point no matter what

With what to accompany spaghetti with kombu seaweed

This plate of spaghetti with kombu seaweed It is a main dish by itself, satiating and nutritionally complete. Now, in a typical Italian menu, the starters or antipasti are irreplaceable, in this case a fresh zucchini carpaccio goes well to start the meal. And to culminate the encounter between both cultures, we took a direct flight to Japan with the dorayakis, a traditional sweet from Asian pastries.