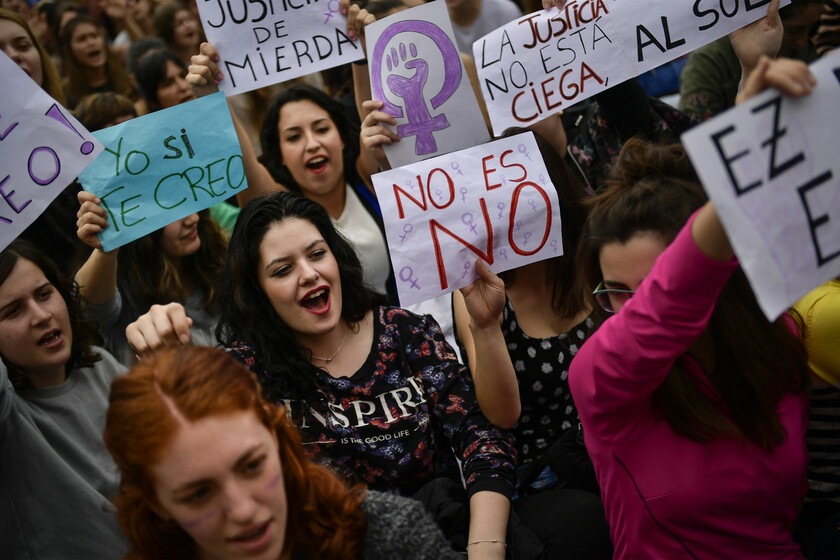 “He didn’t say no”, “he was asking for it”, “you could tell he wanted to”, “we had been drinking” or “it wasn’t entirely clear”: these are common phrases in court in cases of sexual violence. Mechanisms to make the limits of consent more complicated than they already are. The new law promoted by the Ministry of Equality and approved by Congress wants to solve it. What used to be “no means no” has become “only yes means yes” in the sexual freedom law, where consent is everything.

Precisely sexual consent has been the protagonist in the debate on sexual crimes in recent years. Media cases such as La Manada or Burjassot and the determination of a part of the political left to take this to the legislative area is settled today with the new law.

The new law. More than two years have been necessary for what began as a project promoted by the Ministry of Equality of Irene Montero, and which came to light in 2020, to become law. The Congress of Deputies has given its approval this Thursday (only PP and Vox have opposed). The already publicly named “law of the only yes is yes”, is inspired by the claims in the feminist demonstrations that took to the streets after the sentence of La Manada. And it places sexual consent at the center of it all. It also makes a distinction between sexual abuse and assault, one of the historical demands of feminism.

Where does consent lie? Under the law, it becomes the most important thing to determine whether or not there is a sexual assault. In other words, we went from a norm that required proving that the victim refused and resisted to another that would require affirmative consent, as required by the Istanbul Convention. And when is there consent? Only “when it has been freely manifested through acts that, given the circumstances, clearly express the will of the person.” That is, “Yes” is green light. Not saying or doing anything is a red light.

Currently, in our Penal Code, the concept of “consent” is still tied to very physical issues, such as the absence or presence of resistance or the lack or existence of pain in the sexual act. In the case of La Manada, the magistrates did not give sufficient weight to the violent coercion, which prevented them from being convicted of rape.

Physical violence, not so necessary. Physical aggression is also of vital importance in the previous legislation. To verify the existence of violence, a “physical means” must be used to bend the will of the victim. For example, tears, hits or shoves. On many occasions, as we saw in the case of La Manada, the victims choose not to resist. And what was concluded then was this: “The absence of injuries does not reveal the existence of violence, which meets the requirements of this element that qualifies the type of sexual assault.”

Distinction between assault and sexual abuse. In addition, the law reforms the classification of sexual crimes in the Penal Code and ends the distinction between sexual assault and abuse, a widely discussed debate since the La Manada trial that had been causing headaches in the feminist sector of politics since time immemorial. More specifically since 1995, when the left precisely demanded the introduction of that distinction. Now, with the new law, all those behaviors that violate sexual freedom without the consent of the other person will be considered sexual assault and there will be different ranges of penalties depending on the severity and the concurrence of aggravating circumstances.

We return to a debate from almost 30 years ago: the distinction between abuse and assault was introduced precisely to grade crimes and prevent “minor assaults” where guilt was not clear or the use of violence was more diffuse from going unconvicted.

Does the new law solve it? Professor of Criminal Law Jacobo Dopico insists on Twitter no. He explains that one of the problems in expanding the concept of sexual assault to encompass abuse lies in the determination of the sentence and criticized that “the subway snooper and the razor and corner aggressor are included in the same criminal framework.” He explained that the project breaks with the idea of ​​”separate steps” (homicide-murder, mistreatment-torture) and introduces a very broad common framework that brings about these problems.

The penalty system. It ranges from a fine to prison terms of 12 years for aggravated violations, and up to 15 years when two aggravating circumstances concur. These include, among others, sexual assaults committed by two or more people, the use of drugs or drugs to override the will of the victim, that the woman is a partner or ex-partner (even without living together) or the use of violence physical or weapons to threaten.

Even fine for the “intimidating” compliment. Another novelty is the criminalization of expressions, compliments, behaviors or propositions of a sexual nature “that create an objectively humiliating, hostile or intimidating situation for the victim.” They will carry a fine or work for the benefit of the community or penalty of permanent location. For that, the aggrieved person will have to file a complaint.

Punishment for the dissemination of sexual videos. This is becoming one of the problems of the 21st century, we have seen it dozens of times in the news and we have told it in Magnet. The dissemination of private photographs and videos of sexual content without consent will be a conduct that will carry penalties of three months to one year in prison or a fine of six to 12 months. And not only that: sharing or forwarding these types of images via WhatsApp or other channels after receiving them will also be subject to a fine of one to three months.

The context. The law’s approval comes amid several new cases of gang rape. We’ve seen no less than four multiple sexual assaults in the last three weeks. The Geoviolenciasexual portal has documented 274 sexual assaults and multiple rapes between 2016 and 2021. But it should be noted that neither the Ministry of the Interior nor the Prosecutor’s Office break down data on the number of group rapes that are recorded. It is a major loophole.

In its reports, the Prosecutor’s Office pointed to an educational problem as the cause: it cites the serious lack of training in sexual matters and also the consumption of pornography on the Internet at a very young age.