This is the new Mercadona potato omelette: for its price, it meets 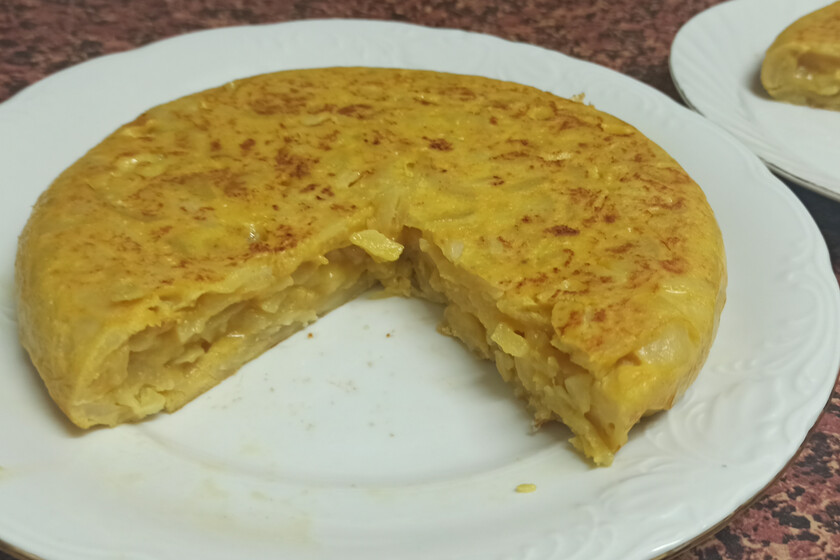 The potato omelette is one of the standards of Spanish cuisine. Humble and cheap dish where they exist, at least until a few months ago, the reality is that we are talking about a recipe that is made in practically every home and that defines our country in two groups: lovers of potato omelette with onion and those who bet on cooking it without onion.

Mercadona was no stranger to this dilemma, and for a few years They keep their shelf a couple of potato omelette options that just needs to be heated and served. Last August, Mercadona decided to update the recipe for the potato omelette with onion and bet on adding a slightly more poached onion.

Prepared by the Navarran company Elaborados Naturales de La Ribera (located in the municipality of Funes), Mercadona’s potato omelette with onion is presented packaged in a protective atmosphere and in units of 600 grams, at 2.40 euros per unit, with no difference in price between the option chives and the sincebollist.

The truth is analyzing nutritional information and the labeling of the potato omelette, the reality is that the ingredients are few and very natural (only pasteurized eggs have preservatives).

Potato (58%), pasteurized egg (31%), fried onion (6%), sunflower oil, virgin olive oil (1%) and salt. not flake, but It would be a detail if the company that manufactures this tortilla mentions the percentage of sunflower oil.

Although we know that it will be between 6% and 1%, since the rest of the percentages are given, it would be convenient if that of sunflower oil were also given. In any case, since the tortilla only has five different ingredients and mathematics tells us that the percentages that Mercadona tells us reach 95%, it is evident that it has 5% sunflower oil.

As in other precooked tortillas, the Valencian company run by Juan Roig Hacendado recommends two cooking methods for its potato omelettes: in the microwave or in the pan, where we can choose the option that suits us best.

In the microwave, the Mercadona potato omelette is inserted into the appliance with the container itself and with the slightly perforated plastic that covers it, four minutes is recommended if we want to leave a potato omelette a little juicier or program seven minutes if we want it to be more done.

In another order, the option of the potato omelette in a frying pan simply asks that add a tablespoon of olive oil to a frying panlet it heat over medium heat for a few minutes and then cook each side of the tortilla for four minutes on each side.

Five ingredients, a slightly more poached onion, a pinch of olive oil… the reality is that the wickers with which they make dice pretend to conquer us are the ones that anyone would expect a potato omelette recipe, and luckily, a potato omelette with onion from Mercadona is much better than what we might think of pre-cooked omelettes.

Read:  Lidl has the perfect cast iron skillet for grilling, cooking and even serving at the table

We know it’s not Grandma’s and we know it’s a big company making precooked food, but the reality is that, To get out of trouble, the potato omelette with onion from Mercadona is more than suitable.

Obviously, it has small deficiencies, but in the tasting it more than complies. Apparently, it is true that it is still a precooked tortilla, but it is inevitable that this will happen when the company that manufactures them makes 200,000 a day. In any case, we are not going to get carried away by the aesthetic impression to assess whether the tortilla is good or bad.

What is certain is that, as you open the protective container, Mercadona’s potato omelette is already makes it clear that there is a percentage of fried onion in its elaboration that begins attracting attention from the first impact.

That, in our opinion, is a positive point. Although obviously it will depend on how much we like the tortilla with onion or without onion. After that brief impasse, we have bet on cooking the tortilla in the pan, Well, we believe that the microwave dries it out excessively and also will not allow us to create that light crispy and toasted crust that we can give it with the pan.

After the peremptory time of four minutes on each side, we have taken out the tortilla and the reality is that at home leaves a quite pleasant aroma of domestic tortilla. Already on the plate, after letting it rest for a couple of minutes, we have proceeded to cut it.

As you can see, despite being made with pasteurized egg, Mercadona’s potato omelette with onion has a quite successful appearance with a juicy egg and a creamy interior without becoming liquid, which is also a positive point.

Furthermore, you can also see that the potato is cut into regular and small pieces (this facilitates mass production and reduces cooking time) and without being fried, it is a potato that is well cooked. However, where Mercadona’s potato omelette fails slightly is in the taste.

It is good, but there is a slightly bitter profile, as if the sunflower oil used to make it had too much presence, which leaves a final bitterness in the back of the palate which is not entirely pleasant, surely the responsibility of the oils, and a bit powerful.

In any case, for 2.40 euros and with a price of 4€/kg, it seems to us that Mercadona’s potato omelette is quite successful and is more than competitive enough to manage a picnica snack or a lunch without qualms.

In DAP | Mercadona will stop making bread, and we already know who will do it for them from now on
In DAP | Mercadona crushed tomato: we tell you who makes it, what ingredients it contains and 19 recipes to make the most of it