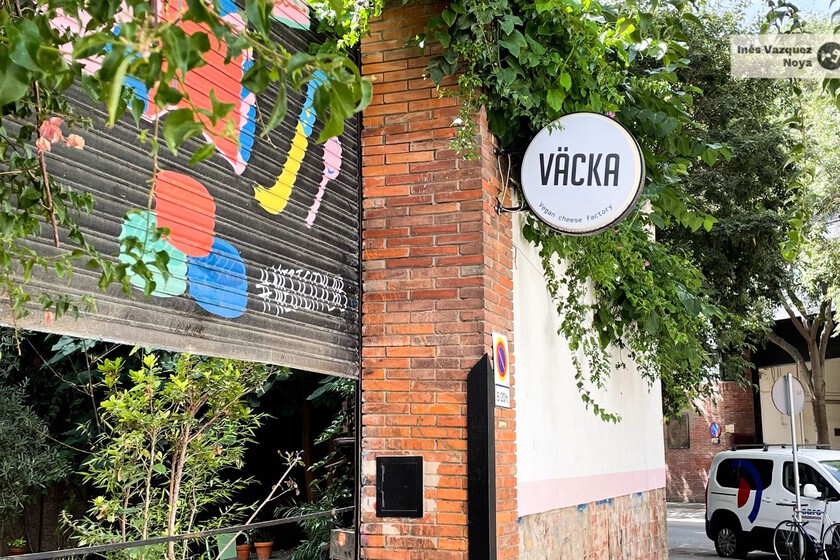 The Barcelona company Väcka produces plant-based artisan cheeseswithout giving up the flavor and texture of what is known, with the benefit of also taking care of the planet and the animals.

Luz Sanz Y Maxim Boniface changed their lives the day they decided to adopt a more conscious diet without products of animal origin. Back then, in 2013, many people were unaware of the meaning of the term veganism. A decade later, 100% plant-based products can be found in virtually any supermarket and store.

¨When we started, there were products on the shelves that emulated the behavior of cheese but the aroma or flavor was artificial. We wanted to investigate how to reproduce the organoleptic behavior of cheese replicating the processes with vegetable substrates¨, Luz tells about the origin of the project.

Originally from Argentina, she assures between laughs that far from missing the barbecue, I missed the porteña pizza. (Side note: pizza in Argentina is particular because of the industrial amounts of cheese per slice) While Maxime, for his part, missed his native country, France, the cheese and fruit boards. The search for both, resulted in a workshop of 100% vegan and sustainable cheeses located since 2019 in Nest City LAB, an urban sustainability laboratory in the Poblenou neighborhood in Barcelona.

In Väcka they make spreadable, seasoned, fermented, brie and special block cheeses for melting. All without gluten or additives or preservatives. with seal ecological, its sales are focused on the online and/or retail channel in specialized stores such as Veritas, Vegacelona or Ametlier Origen. They are also found in pizzerias such as Grosso Napoletano, Totale Pizzería Pop, Del Roble and many more.

Today they market two varieties of creamy: Philadelphia type and flavored with basil, a mozzarella ideal for gratins, a style cheddar of pumpkin and the type brie reformulated Vrie. The latter, one of the most acclaimed by the public, is a faithful reproduction in taste, texture and color. The soft and fluffy paste cuts easily under the crust and its intense heart does not disappoint. It is ideal to eat alone or accompanied by some fresh fruit and homemade bread. As an invitation to enjoyment for vegans and non-vegans alike.

Read:  In this apartment in the Gothic quarter of Barcelona, ​​life revolves around a 50 m2 patio, which is like an oasis of peace and light in the center of the city

At Väcka, the vision is set on the future and on new launches. They are working to obtain a nut-free product with less environmental impact. Although the initial experiments had cashews as the protagonists, the Pumpkin Cheddar for example does not have nuts and is 60% pumpkin. ¨This year we reduced the use of pearls by 75% and incorporated almonds¨ assures Luz, about the alternatives in the production process.

This adaptation makes it possible to reduce the emission of Co2 and traceability of the raw material, as it is present in the area of ​​Catalonia. In an effort to optimize resources, Väcka is constantly movement and innovation to create a food that is of quality and respectful of the environment, animals and human beings.

The mission is simple: ¨provide a solution to those flexitarians and/or vegetarians who do not dare to eat 100% vegetables because they feel that the products that exist on the market, the substitutes for cheese, are not rich enough¨. It is evident, as the companies plant-based, seek to provide alternatives to people who are part of a food community that is consolidated and that needs to make an easy transition. Although, the trigger is the cheeses; Väcka, is much more than a cheese factory, it is a change agent in building a better world.

Regarding the future of food, Luz hopes it will be one without meat and with quality plant-based products. He strongly supports the importance of having a plant cultureto be tastyto understand that without sacrifices you can also enjoy food.

For more information, Väcka is located at Carrer dels Almogàvers 138 in Barcelona or on their website.

In DAP | This is how Spanish vegetarians are: the vast majority are women, young people and urbanites In DAP | The 11 keys to achieving a safe and healthy vegan diet