The “tunnel of the Strait” is an unfulfilled dream for years. Now Spain wants to reactivate it 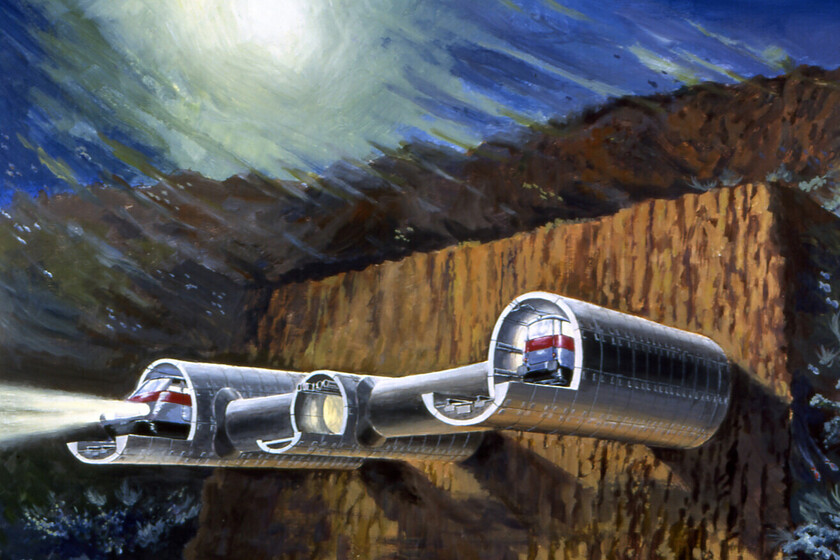 Its possibilities have heated the imagination of engineers, architects and politicians for a few decades, but the Spain-Morocco underwater tunnel project is currently just that, a project. It may not always be so. It may even be that the key step has already been taken so that the idea finally comes out of the drawers and one day closes a strait with high strategic value.

At least that invites us to think about the last movement of the Government.

An injection of 750,000 euros. Difficult to promote a project of the magnitude of the Spain-Morocco tunnel without funds, so that is precisely what the Spanish Government has decided to do: inject money into it. Not a great game, but significant. The General Budgets that the Executive has just presented for 2023 outline 750,000 euros for the study of a railway tunnel between the two countries under the Strait of Gibraltar. Although it is not the first time that it has done so —it is the second consecutive year in which the item has been recorded—, it has generated some expectation.

And also some rhetoric. That’s how it is. As or even more interesting than the figure is the rhetoric that accompanies it. In the public accounts it is noted that the transfer of capital to SECEGSA —the Spanish company attached to the Ministry of Transport in charge of promoting the project— “will mean the definitive and necessary step to be in a position to start the construction processes of the work”. elDiario.es even points out that the state company speaks of a “relaunch” from 2021.


How to interpret the assignment? That is the big question. The appropriation of €750,000 reflected in the 2023 state accounts has aroused considerable interest, but it is important to bear in mind several important factors. The first, of course, is that what is currently a project are the general budgets themselves, which must receive parliamentary approval. Another key has been provided to The country the Ministry of Transport, who wanted to lower the tone.

Raquel Sánchez’s department recalls that SECEGSA’s mission is “carrying out studies, never works”, for which an agreement with its counterpart in Morocco, the Société Nationole d’Études du Détroit (Sned) would also be necessary. The ministry stresses that the tunnel is a “very long-term” plan and its construction would require a new agreement with Rabat.

Short and medium term goals. There are some signs for optimism, in any case. The first is that the Recovery Plan included the updating of the preliminary connection project drawn up 15 years ago. The second is significant and advances it The countryto whom Transportes points out a “realistic short-medium term objective” for the money that is being invested now: “The construction of a reconnaissance gallery that allows geomechanical characteristics to be identified.”

To carry it forward, the approval of the Moroccan authorities would be necessary and its construction would take at least five years, but the work would present some other valuable “advantage” beyond the technical data it can provide in the face of an underwater tunnel. It could be used to “move other assets through it, such as fiber optics or high-voltage power lines.” The idea will be put on the table in November, when the representatives of SECEGSA and Sned meet.

And across the strait, in Morocco? In April 2021, the transport ministers of Spain and Morocco discussed the possibility of revitalizing the project during a videoconference. The scenario was then complex. First, due to the presence of another actor on the board, the United Kingdom, which would have shown its interest in a subway linking with Gibraltar; second, because relations between Madrid and Rabat became cloudy shortly after due to the Brahim Ghali case, which seemed to remove, at least temporarily, any hypothetical connection in the strait.

Some time later and after Pedro Sánchez’s change of position regarding Western Sahara —a turn that favored a new climate between the two countries—, the Moroccan press pointed to a hopeful future for the Gibraltar Strait mega-tunnel. In June the newspaper Assabah assured that the infrastructure could benefit from the future gas pipeline between Nigeria and Morocco. Some media even pointed out that the works would begin as early as 2030.

The context, essential. Difficult to understand the attractiveness, interest and possibilities of the megatunnel without taking into account its context. The Government’s decision to allocate funds in the Budgets comes months after Moncloa’s change of position in the face of the conflict in Western Sahara, which generated annoyance between the Polisario Front and Algeria, but made it easier to normalize relations that had been tense with Rabat until then . The second key is the energy crisis scenario.

Reading in energy key. Morocco enjoys a strategic position as a gateway to Europe and an enviable potential for renewable energy, with nearly 300 days of sunshine per year, desert areas and a vast coastline with thousands of nautical miles at its disposal. In other words: a more than remarkable scenario to benefit from photovoltaic energy and offshore wind.

Europe has not gone unnoticed by its potential as a partner and supplier, in fact it has financed part of the 3,000-hectare Noor Quarzazate mega-solar plant. Nor has it done so in England, where the company Xlinks has launched the ambitious Morocco-United Kingdom project: generating electricity with a total capacity of 10.5 GW from the sun and wind in Guelmim Oued Noum, Morocco, to combine it with a of batteries and a gigantic submarine cable of 3,800 kilometers that will allow it to export energy to the United Kingdom.

Rabat also has a roadmap for the development of green hydrogen and its role becomes even more interesting with the future gas pipeline between Nigeria and Morocco, which has just received the support of both countries and ECOWAS, the Economic Community of African States. Western. The pipeline will run along 7,000 kilometers and 13 countries, supplying gas and creating an interesting route for export to Europe by connecting with the Maghreb Europe Gas Pipeline.

A historic infrastructure. And what is the ultimate goal? What exactly does the subway between Spain and Morocco consist of? The project has been on the table for quite some time, so long, in fact, that the plans to link both territories date back to the second half of the 19th century. Since then, different options have been considered that tried to be defined with polls.

The result is a proposed route between two terminals separated by 42 km with a 38.5 meter underground, much of it (28 km) in a submerged section. For the route, the technicians opted for the shallowest section, between Punta Paloma and Punta Malabata. Conventional and high-speed rail traffic, light and heavy vehicles would pass through the canalizations.