Bullfrag
Home News The story of Ibai Llanos, the Spaniard who went from recounting Tetris... 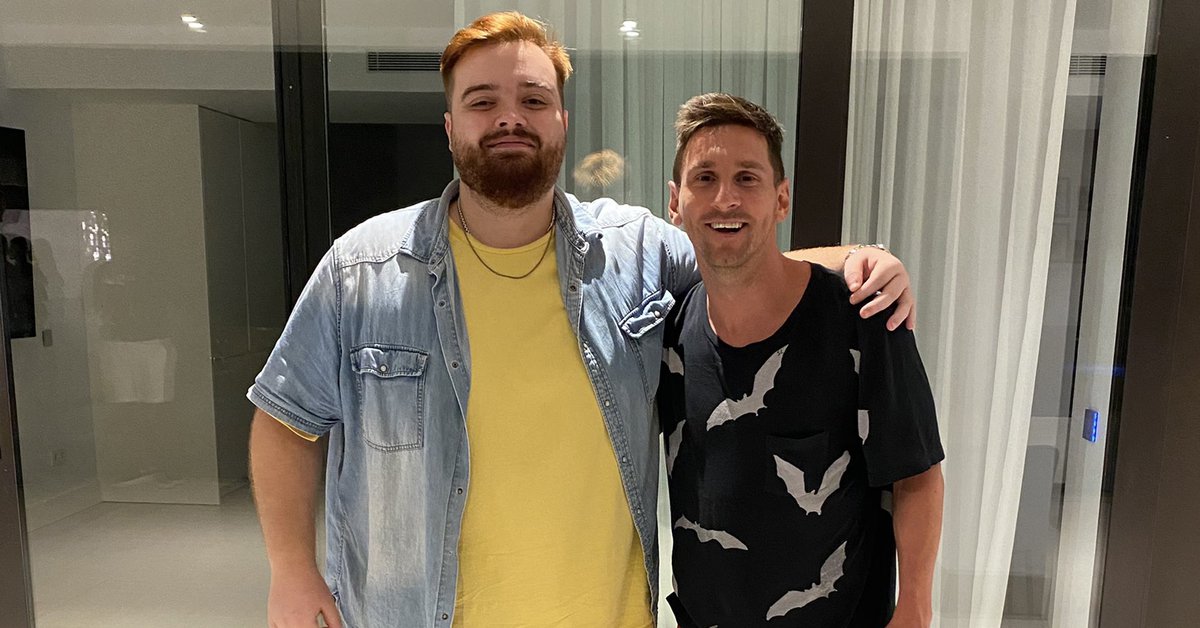 This Wednesday Lionel Messi was introduced as a new PSG player in a historical fact for world football, taking into account that the Argentine footballer was supposed to play his entire career in the Barcelona. Along with him were his father, Jorge, his wife, Antonela Roccuzzo, his children, Thiago, Mateo and Ciro, and in this select group there was room for one more: Ibai Llanos.

How did this Spanish streamer who until just over a year ago was a growing video game storyteller to become a social media star and one of those who were able to interview Lionel Messi on his first day as a Paris Saint player? Germain?

Ibai Llanos, or simply Ibai, was born on March 26, 1995 in Bilbao, Spain. In his childhood and adolescence, became fanatical about the virtual universe that grew in a world that was just beginning to enjoy the advantages of the Internet. Being young, he did not see this revolution as a source of money, but simply as a center of endless fun. With the appearance of various platforms, he began to show her his games of Call of Duty Modern Warfare 2, one of the most popular video games of 2009 and 2010, to dozens of users through Youtube.

Back then when he was just having fun online, Ibai was having the worst time of his life. Is that when the 2008 crisis exploded, his family suffered the blows of the economic debacle. His father became indebted for the credits he had taken some time before, his mother lost her job and he, at the age of 13, found himself in a situation of extreme uncertainty: “I was a kid who didn’t know what to do with my life, at home we didn’t have a lot of money, we started arguing a lot, my parents then separated and it was a difficult time”, he recalled in an interview with the program Black box in May of this year.

It was in that talk that he acknowledged that just when it seemed like his life was going nowhere, that his grades in school had plummeted, and that he had entered into toxic relationships with some new friends, the light came on. end of the tunnel. The light from a screen. “Videogames saved me.”

While characters like ElRubius, Vegeta777 Y WillyRex, among others, they seemed to completely monopolize this new world, the young Ibai managed to make a space for himself by stopping commenting on his games and starting to relate League of Legends encounters, one of the most popular online video games in history. In this way, he received a job offer to transmit these games and his name was no longer strange in that environment. However, the best was yet to come.

To break that small circle in which he moved and spread his fame, he opted to comment on more bizarre videos, such as marble races or even a final of the Tetris World Cup. Those screams of “Come on Jonas… for Spain. Come on Jonas… for Albacete ”,“ give me a stick from the right ”and“ don’t screw me, Jonas ”, they went viral in 2018 and made the world know his voice and his ability to put tension on a simple game of Tetris.

By then, in Spain Ibai was already known because in 2018 had had the opportunity to comment on La Liga de Fútbol matches and then, in 2019, he put his voice to FIFA 20. But without a doubt, the explosion of popularity came to him with the coronavirus pandemic. The mandatory confinement of much of the planet turned humanity towards the computer (even more than before) and that caused the outbreak of Twitch, the streaming platform par excellence. It was at that moment that while adults turned on the news to see what was happening with the coronavirus, young people turned on their devices to have fun. Among the most appetizing options on that leisure menu, the broadcasts of this 25-year-old Spaniard who took with humor everything that happened in video games stood out.

READ:  Levante says goodbye to the Champions League with honor

As at that time the sporting activity had stopped, many footballers such as the Brazilian Neymar, the Argentine Sergio Agüero or the Belgian Thibaut Courtois also turned to streaming, so as not to lose contact with their fans. And what better way to do joint broadcasts with experts in the field who also know how to make people laugh. It was in this way that Soccer stars and streamers came together in 2020 in the virtual universe, giving millions of users an incredible experience.

After so many hours of games from the Fall Guys or the Among us, video games that were a trend during the beginning of the Covid-19 pandemic, Agüero and Ibai struck up a pleasant friendship. To such an extent that Kun was the first to participate in the interview cycle which began this year and which included stars such as Gerard Piqué and Ronaldinho, among others. In this way, while some journalists on the radio or television channels were enraged for not being able to get the best players on the planet to participate in their shows, this nice bearded boy with a microphone and a screen was achieving what no one else could.

The great relationship he was able to forge with Agüero made the former Manchester City player visit him a few days ago, when he arrived in Spain to join Barcelona’s practices. Then they were finally able to see each other’s faces and chat about soccer and video games. But also about Lionel Messi. The thing is the Kun revealed to him that The flea I was a fan of his videos and he used to watch some of his funniest clips.

The sympathy of the Leo For Ibai it was such that on Saturday night, at his farewell dinner, he invited him to his house to announce that he was leaving Barcelona. In that meeting in which players such as Jordi Alba, Sergio Busquets and Agüero himself participated, there was also Llanos –together with the Argentine streamer Coscu–, who was taken to the place deceived by the Kun, which made him believe that they were going to eat at an exclusive restaurant in Catalonia. “I was at Messi’s house, not knowing it was Messi’s house!” Llanos recalled on Sunday in a hilarious story he made in Twitch about what had happened the night before.

This Wednesday at the Princes Park, stadium of PSG, Ibai was also present to be part of the story. He lived closely the official presentation of Messi as a new footballer for the French team, after having played his entire career at Barcelona. It is that this Spaniard, barely 26 years old, who until 18 months ago was dedicated to relating video games, today is one of the most famous people in the Western world and one of the most desired guests by soccer stars. That’s why her interview with Leo didn’t take long to go viral.

Lionel Messi spoke with Ibai Llanos from the PSG stadium: the jokes about the dinner they shared and the dialogue on the pitch

Lionel Messi was presented at PSG: “My dream is to raise another Champions League again”

“Give me your hand, Ciro”: Lionel Messi’s children were the protagonists of their father’s presentation at PSG

“I have grandchildren and I know schools”: the unexpected dialogue of Argentine Omar da Fonseca with Messi and the euphoric harangue he made

Messi gave details of when his debut with PSG could be: the games that could mark his debut

Passionate reception of PSG fans to Messi: the unusual gift that a fan wanted to give to Leo’s tender gesture

These are all the Xiaomi that remain to receive MIUI 12.5 according to the official calendar