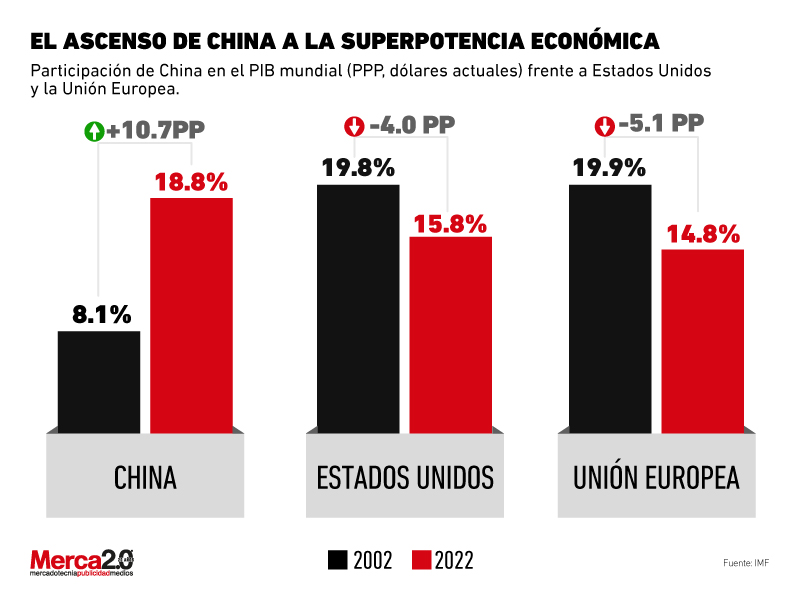 We show you the rise of the chinese economyconsidering the sum of the market price of all goods and services produced in the country, compared to the decline in the United States and the European Union.

The gross domestic product (GDP) It is an economic indicator that reflects the monetary value of all the final goods and services produced by a country, which can give an idea to the different economies so that they can contemplate their situation and thus be able to work on effective strategies to promote other types of actions that allow them to safeguard their income, where large companies, imports, exports and even local businesses influence their construction.

According to figures from the International Monetary Fund (IMF), an organization that is responsible for promoting global monetary cooperation capable of ensuring financial stability, facilitating international trade, reducing poverty and promoting sustainable economic growth, during 2020 the GDP came to represent the figure of 84,971.65 billion dollars, “a little” less than what it registered during 2019, with 87,390.70 billion dollars (due to the pandemic); however, it is thought that during the following years the economic situation will recover and considerably exceed its previous figures, since the same study of World Economic Outlook Database It is expected that by 2026 the world GDP will reach 127,390.79 billion dollars.

These figures represent “only” the economic set of the various countries as a whole, but another completely different situation can happen individually, since while some go up, others go down.

An example of this can be found in the graph previously shown on the last IMF World Economic Outlook reportwhere China in just 20 years has managed to register such a rise in its economy that it has even become the “world’s manufacturing center” and the largest exporter of goods, with the country expected to represent 18.8 percent of the World GDP, according to purchasing power parity (PPP), registering an increase of 8.1 percent compared to two decades ago.

Despite this, while China shows this important rise in its economyother countries have diminished their economic superiority, as the world leaders were 20 years ago, since the European Union registered a decline in its value of -5.1 percent from 2002 to 2022, where the United States also showed its weakness by declining 4 percent over the same years, positioning China as the world’s dominant, but how has it managed it?

In part this is because, according to information from the World Trade OrganizationChina has managed to position itself as the main exporting country worldwide during 2021 registering a value of 3,363.96 billion dollars, leaving the United States below, with 1,754.58 million dollars (almost half its value), Germany with 1-631.86 million dollars, among other countries such as Japan or Italy.

Despite this, the Asian leader fails to show himself as the main importer, as the study of Time Series on International Trade shows that the United States registered in 2020 a value of 2,407.55 billion dollars in importsleaving China in second place with 2,055.75 billion dollars, and showing that it is mainly focused on producing and selling products to the rest of the world.

China has managed in 20 years to surpass the economy of the world leaders, a reality that it has achieved in part through the sale of goods and services to another market, demonstrating superiority in its professional efforts in different sectors and its ability to do business.

Seven economies that are changing the way you do business