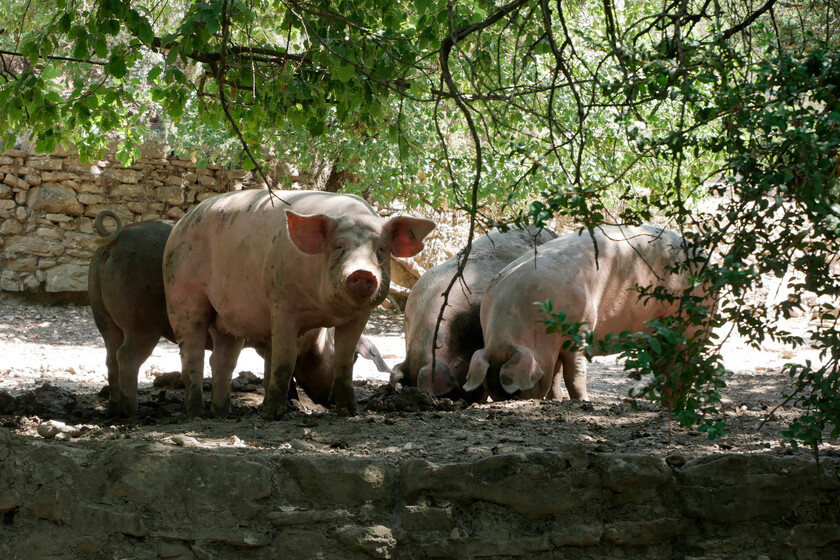 The Fueva is a small valley in the Aragonese Pyrenees, in the region of leftover. Located between Aínsa and Benasque, between the Ordesa National Park and the Posets-Maladeta Natural Park, between peaks as emblematic as Monte Perdido and Aneto. In the middle of everything. Or in the middle of nowhere.

In times, La Fueva was one of the most populated valleys of the Pyrenees: its extension and its slightly uneven terrain were ideal for agricultural and livestock activity. Today its inhabitants are torn between fighting for an increasingly deficient primary sector, betting on tourism or renting their land so that the energy companies that have set their sights on the valley install gigantic solar panels that the rest of the neighbors do not want to see or in paint.

We have a dozen banners and graffiti with the slogans “The Fueva is not for sale” Y “Not plates” before arriving at the house of the Borruel Salinas, who almost twenty years ago opted for a differential livestock model, a pioneer in Spain: the Fueva brass.

This pig is a cross perfected since 2005 by the family, between the native breed of the Pyrenees, the bigurdan pig –directly related to the Basque euskal txerri and the porc noir de Bigorre, from the French Pyrenees–, and today’s industrial varieties. “This breed is extremely unproductive, but it maintains a flavor of yesteryear and when crossing it with the current breeds, an intermediate point is achieved, which is where we try to move,” he explains. Nestor Borruel.

Since its birth, the Fueva brass has lived in the forest, without ever passing through the stable

But just as important as the pig is its management. Since its birth, the brass of Fueva lives in the forest, without ever going through the stable. Living conditions that the Iberian pigs do not even enjoy, which, until the montanera arrives, are enclosed within four walls.

“The pigs gain welfare, because they are in their natural environment, the forest, the mountain, and they can live and express themselves naturally as a pig”, continues Néstor. “Bathing in the sun, hiding if it’s hot, if there is grass they eat it, if it rains they seek shelter… They can express their nature. They breathe clean air, not the concentrated air of slurry from farms, and we give them clean drinking and spring water, in addition to giving them the cereal supplement without any additive. It is a meat that is very reminiscent of the pork that existed before”.

An alternative to gigantic farms

Joaquin Borruel, Néstor’s father, who welcomes us during our visit to the farm with his wife María Carmen Salinas, has spent his whole life working with pigs. For more than 20 years he was a member of the cooperative copayone of the most important in the pig and poultry sector in Spain, based in Lleida, to which it sold piglets.

“If you wanted to continue you had to mount [una granja] from 500 pigs up. And we didn’t want that.”

As Borruel himself recounts, “he went to hell from one day to the next”leaving a large part of its 1,600 partners and almost 300 workers stranded.

In the first decade of the millennium, like so many other families, the Borruel had to reinvent themselves. But, unlike most of his former colleagues, they turned their backs on the model that was imposed then and continues to be imposed now: the bigger the better, the better.

“This was an alternative to not have to swallow that,” Néstor explains. “A window was opened for rush in quality and not in quantity. At first it was a test, but we saw that the market liked this type of pig and that it had a gap.”

Read:  Sons of the Forest will not be released this year either, but at least it already has an exact date for its release

Currently, the Borruel have only about 50 pigs, who live in several plots of forest that in total add up to almost 8 hectares. We might think that, living outdoors, it costs less to maintain them, but nothing is further from the truth.

“Production costs are much higher”

“The industry has stabled them for a reason”Nestor explains. “They are totally sedentary pigs, they don’t burn anything they eat, everything goes to growth, and as the temperature is homogeneous, nothing goes to combat low temperatures. With approximately five and a half months they already manage with specific breeds that a pig has around 100 kilos and ours take around 10 months and some a year, although we do not kill them with 100 kilos but with 150 or even 180″.

All this extra time means more costs in the form of feed. The accounts come out by the hair. “Production costs are much higher and when the price of raw materials increases they grow faster than on conventional farms, you need more food to make a kilo of meat. There are two options, either the client accepts it or somehow you have to stop. At the moment the client continues to accept it. Our size also helps, we are a very small farm. We produce less than we could market, surely”.

Joaquín is more sparing in words than his son. Also more direct: “The Ukraine It’s going to pass us an invoice that I don’t know how we recover it. This is more the whim, to make money you would have to be with something else”. (In addition to pigs, the family has a sizeable herd of sheep.)

The Borruel Salinas make a longaniza cured with brass that is a real delicacy.

Considering the low production, it is not easy to find Fueva brass outside its website, where the Borruel Salinas sell without intermediaries, in lots that are around 20 euros per kilo. Outside this route, you can only find brass in some butchers and delicatessens in the area –such as Melsa, in Graus– and, also, in some of the the best restaurants in Aragonwhere they have immediately known how special a product like this is.

“They practically had us all the michelines of Huesca and Zaragoza too”, explains Nestor. “The cooks and the owners have come to see them, they have been with the pigs. And, of course, then it is easier to talk about the product”.

You only have to see a brass section of Fueva to see that we are dealing with meat with a fat infiltration only comparable to that of the good Iberian. “It’s a more done meat,” explains Néstor. “You can see the exercise of the pig, in the muscle, also the rustic breed infiltrates very well. The fat is special, it is similar to that of Iberian, low in saturated fat. They share properties. The breed I am talking about also has genetic lines shared with the Iberian.”

Like its Extremaduran cousins, the meat of the Fueva brass is ideal for making sausages, which are especially tasty. If you come across sausages or fuets made with brass, don’t hesitate to sink your teeth into them: they are the best you’ll ever taste. Little word.

In DAP | Seven Spanish breeds of pig as good (or almost) as the Iberian: from golden blond to black pork
In DAP | One day in Pazo de Vilane, the Galician company that brought village eggs to the supermarket: “They didn’t give a penny for us”