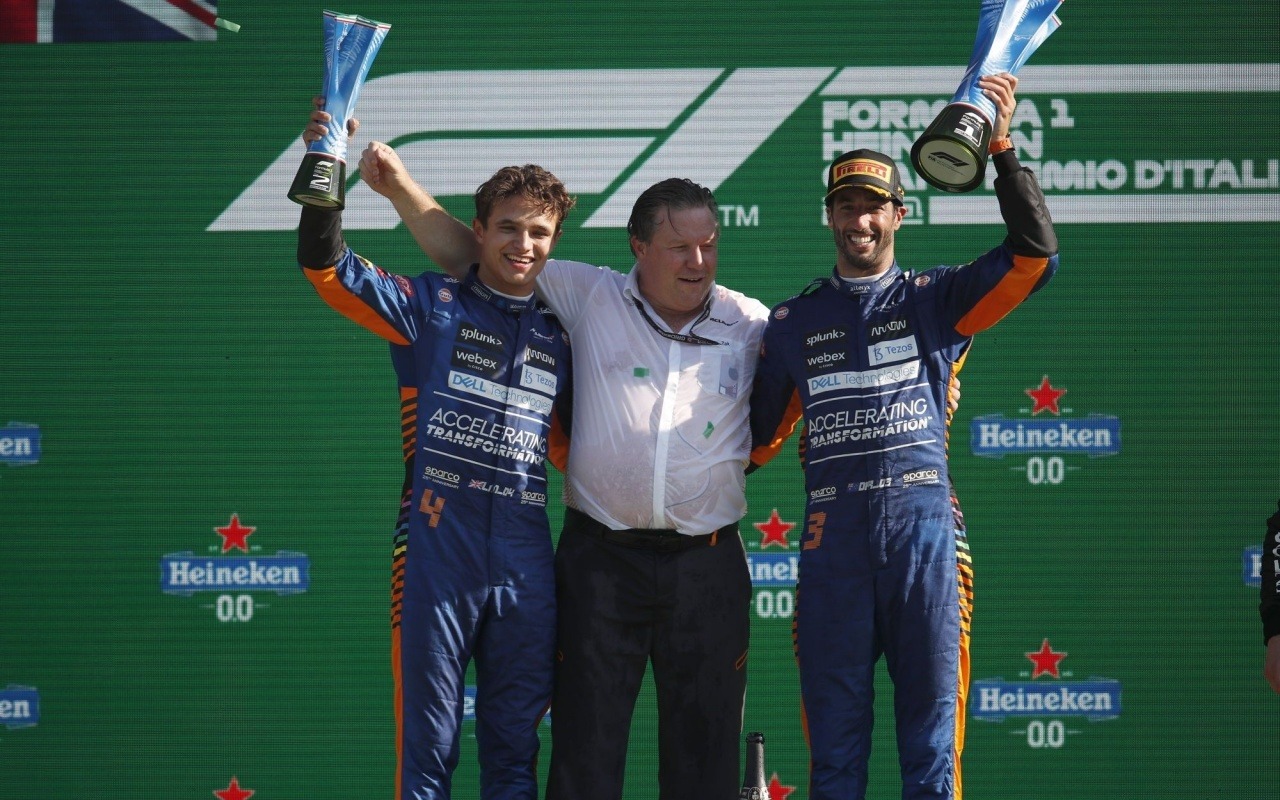 It is like falling into an empty pool of water. When you hit the rib, the first thing you think is not how you got there, but rather you look to see if you have any broken bones, or if you bleed. McLaren bled out … but has found the ladder to return to the chillout where they serve champagne.

All equipment goes through ups and downs but sleeping in a tent is much worse when you have spent nights wrapped in silk sheets. McLaren knew the best and worst of its existence in just a decade; he traveled from collecting titles to leading the table … by the tail. After 3,213 without being at the top, the saddest and most soulless winless streak in its history ends.

The suffering for its people, workers and fans, has been of magnum caliber and that is why the Monza double win has set them as the last comforter in a harsh Antarctic winter. That success is essentially due to the renewed management of Zak Brown, who brought a new vision, remodeled the entire business fabric and of which the racing team is a part. Let’s see what buttons they pressed in Woking.

The embankment by which a large team falls is usually strewn with boulders against which it is hitting its head in a mathematically aligned way as it goes downhill. The four phases may vary in order but they are these:

Index hide
1 1. From the summit begins a cycle with the absence of sporting results
2 2. The marketing
3 3. Past victories do not guarantee future success
4 4. The custom of teams being a run-of-the-mill mechanic or a rotten banknote British lord is long lost.

1. From the summit begins a cycle with the absence of sporting results

The team stops winning races, moves away from the podium, begins the descent down the table, and the person in charge of putting the collected trophies in the showcases goes on to perform other functions or is directly fired. It is shocking to enter the Ferrari museum and see the hundred-odd trophies won on the asphalt shining in front of other glorifying elements, but always polishing them, without new ones arriving, makes point two suffer.

When you go out to see potential sponsors and show them a photo of your pilots bathed in champagne, it is easier to associate the image of any brand than when you arrive without a photo of any podium; it is easy to understand and assume. Mclaren He always had great sponsors by the hand, firms that put a lot of money to be with the winners. But when you reach the finish line last, or don’t even get there, this all gets complicated. Nobody wants to sponsor the red lantern and with it the coffers of the team suffer, in a correlative way the development, the hiring of personnel or the technological investment.

3. Past victories do not guarantee future success

The winning drivers, the kind of which there are usually two, three or maybe four each season, want winning cars. If they detect that with the offer they are not going to fight for a title, they do not sign and they look for something better. Added to the lack of technical strength on account of limited funds is that of its main supporters. Yes a good car, good driver; Worse car, drivers do not tend to be the most appetizing.

4. The custom of teams being a run-of-the-mill mechanic or a rotten banknote British lord is long lost.

Today’s teams are traded on the stock market, owned by investment companies, banks or even sovereign wealth funds; that is, there are partners, shareholders and people to agree on. When a serious crisis arrives, it is common for many to withdraw their confidence, and with it their rooms, which leads to having to look at least the same but in other pockets. It is an extra task left to the rust heir …

… And that heir was: Zak Brown

The North American manager does not chair the corporate group but is the strong man, the visible head, and the guy who brought the necessary winds of change to the career department of a training that needed an internal revolution. The first change made seemed trivial although it carried more weight than it might seem. After Sunday’s victory, dozens of McLaren fans flocked to the entrance of the facilities in Woking. If Ferrari puts a flag over the entrance door in Maranello, at McLaren they shine the luminous that acts as a perennial sentinel in papaya orange, and it is something that does not happen every day. Those who gathered there sounded the horns of their cars and applauded everyone who entered the facilities, even if they were in charge of restocking the soda vending machines.

When Zak had the color changed, what he wanted was for the world to see that it was something else; the recent past was shaken off. At first the thing did not work at all, still tied to the Honda engine, but with the Renault engine things changed, and the arrival of the Mercedes engine has ended up marking the before and after after reaching the podium that others equipped with the same only dream . As is logical the arrival of key pieces such as Andreas Seidl o James Key have also provided a better exploitation of resources and internal organization, which has led the racing team to collect the lost force.

If last year they finished third in the constructors’ table with two podiums, this year, with a third of the calendar remaining, they have a slightly more advantage with third (this year Ferrari) and have five boxes and a victory. They are one step away from finishing second, which was the position achieved in 2011, just ten years ago. The tangible data € is that when Zak Brown took over the reins of the negotiation in 2017 they were ninth in a world championship of ten participants and their partners distributed just over 39 million euros; last year they finished third and distributed almost 148.

Another paradigm that Brown accepted was not wasting efforts when looking for large and supportive sponsors, and replacing that paradigm with a greater number of stickers that contribute lower amounts but more accessible to a higher number of brands. Few things are sadder than seeing an F1 stripped of sponsorships, and it was changed from the ‘few but good’, to ‘many but that the image is better’. If you put them all on the same spreadsheet, the final sum would be: money calls money.

Brown, originally from marketingland, has been able to change not only the racing team but its fundamental bases, and for this he has not looked at Ferrari as Ron Dennis did, its creator. In recent decades McLaren was characterized by being a premium player in a premium world. Dennis did not like half measures and that is why he wanted to have the best team, to make the best sports cars, with the best bicycle designed in his wind tunnel … Only the best was enough for him and to have only one unique product where he could get into . Zak Brown does not want to be the iPhone of speed, but the Samsung, and reach more areas with a wider range. That is why after rebuilding the Formula 1 team he wanted to insist after a bad first attempt in his attack on the Indycar, in which he is already winning races. He adds electrification to his portfolio with his entry into Formula E next year, as well as Alejandro Agag’s Extreme E high-voltage rallies. The icing on the cake is on the way with his unannounced but much vaunted entry into the World Endurance Championship. The idea is none other than to race at Le Mans, and everyone suspects that with a brand behind it, the obvious thing would be that they would do it through a Hypercar based on some street model, or vice versa, create a racing car that would later be domesticated. to roll on the open road.

McLaren has fled from Dennis’ extreme elitism, to pragmatism yankee from Penske. Brown and Penske have an excellent relationship and Zak does not hide that his vision is now that of the American giant. On this side of the pond, little is known about its activity, but Penske has more than 60,000 employees, has won in everything it has gotten into at the sporting level, be it Indy, Nascar, IMSA, resistance and is active in dozens of businesses parallel to mobility, motors, speed, circuits, etc. It is a highly respected giant and as a result has a very recognizable brand in the US.

All this change in vision and undertaking management in the search for funds has led to many companies outside the races being interested in the project in the medium and long term. The first to arrive were the North Americans from MSP Sport Capital, followed by those from Ares Management and Public Investment Fund (sovereign wealth fund of Saudi Arabia). Later they sold the Woking factory to the real estate company GNL to rent it to them immediately, and the latest sale was the subsidiary Applied Technologies to the investment group Greybull Capital. It is rumored that with all this financial bustle, the team has acquired a bag of around 1,000 million euros, with which it will be able to finance all its projects for a few years. The ultimate goal of the plan is to greatly strengthen the brand as a whole, with greater media coverage, generate constant sponsorships, and in a way give them an image that can be sold as Ferrari does with its licenses … There is someone who calls this Disneyfication. Welcome if with that they win races. The symbol of the entertainment giant is Mickey Mouse, who was very smart although he was not red, as we say here. Zak has been in all this, the orange mouse. Papaya to be specific.

Cars with vegan interiors, the ultimate in ethical interiors