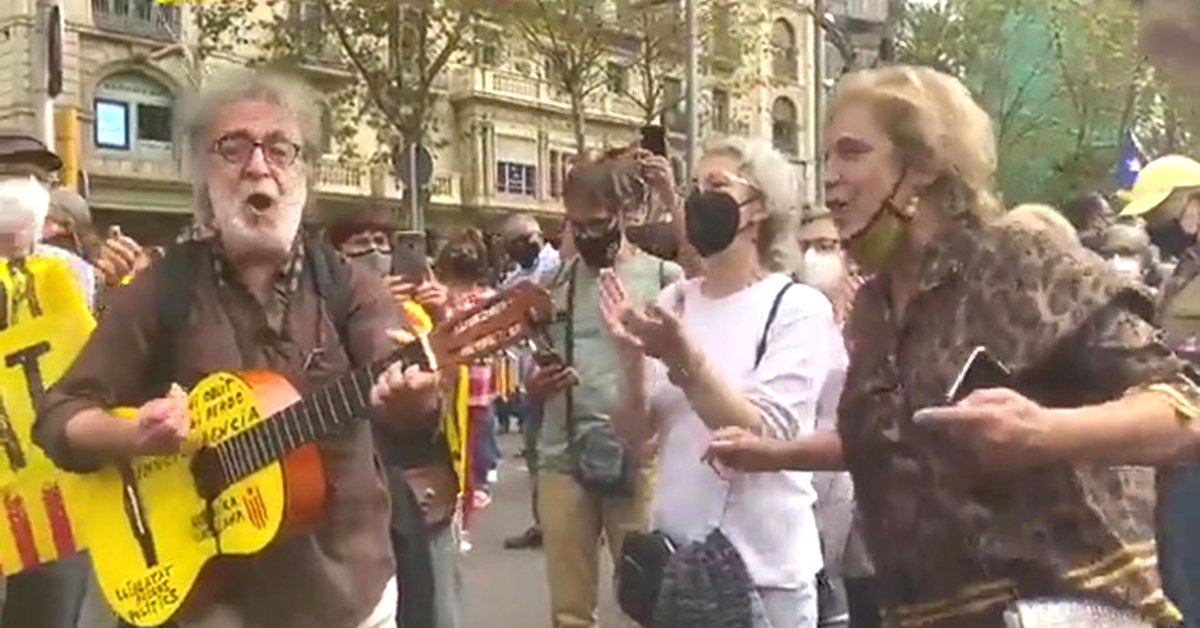 A video of the Catalan journalist and politician Pilar Rahola went viral on social networks for appearing dancing and singing to the rhythm of the song “Bella Ciao”In a protest in Barcelona against the arrest of Carles puigdemont.

In the pictures, Rahola is observed dancing, singing and jumping while another person -guitar in hand- accompanies with the melody of the popular Italian song that became a antifascist resistance anthem and in recent years it became fashionable thanks to the popular Spanish series “The Money Heist”.

Puigdemont finally left this Friday the maximum security prison in which he was held on the island of Sardinia, where on Thursday he was arrested when he got off a plane at Alghero airport by an order of the Spanish Supreme Court, as decided by the Sassari Court of Appeal.

The independentista left prison after 17:00 local time (15:00 GMT), surrounded by a group of independentistas from Sardinia who chanted his name and the word “independence” while singing Catalan songs and waving Catalan and Sardinian flags. “Spain never loses opportunities to make a fool of itself” -he said- and added that the “decision” of the General Court of the European Union on its freedom of movement through European territory, in its capacity as MEP, was “very clear”.

Your lawyer in Italy, Agostinangelo Marras, I affirm that the judge did not request precautionary measures against the former Catalan president So what nor has it imposed mobility restrictions, so you can travel wherever you want.

“This was the first phase, the hearing for the validation of the detention and the application or not of precautionary measures. Then the Court will have to decide whether there are reasons for President Puigdemont to be handed over or not.”He added.

A first view to analyze the situation of the former Catalan president has been set for the 4th of October and Puigdemont will attend, according to Marras.

The lawyer assured that the Italian judge asked Puigdemont if he intends to go to Spain or not and “he said no”.

The hearing was held after 15:00 local time (13:00 GMT) and Puigdemont intervened telematically from the Sassari prison, located a few kilometers from the Court of Appeal.

The former Catalan president had traveled from Brussels to Sardinia to participate last Friday in an international meeting organized by the Adifolk association, along with other personalities such as the Generalitat’s Foreign Action Advisor, Victoria Alsina.

Alsina asked the media in front of the Sassari Court that the European Union “don’t look away” and help mediate the current situation, and he trusted that “the Italian Justice will be alongside the European Justice, as were Germany and Belgium at the time, and in this sense what we want is that this misunderstanding be resolved as soon as possible”.

Read:  Volta Trucks announces that it will bring its electric trucks to Spain

“We have been in contact with the European authorities and we ask that they not look the other way and help us mediate in what we consider to be a conflict that has a part of it in the capital of the European Union“, said.

A group of pro-independence activists from Sardinia gathered in front of the Sassari Court to protest the arrest of the former Catalan president and ask the European Parliament to restore immunity to Catalan MEPs.

The spokesperson of the group “Indipendentzia Repubblica de Sardinia” IRS, Simone maulu, explained to the news agency Efe who decided to concentrate out of solidarity with the Catalan independentists, with whom “they have always had contacts” and even “participated as volunteers during the referendum.”

The Italian Ministry of Justice specified that it has no decision-making power both in the arrest and in the possible delivery of former President Puigdemont to Spain, since it is a Euro order and therefore it is a different procedure than an extradition.

“The Ministry of Justice specifies that it does not have any decision-making role in the procedure related to the European Arrest Warrant, such as the one related to the case of Carles Puigdemont. The procedure is entirely in the hands of the judicial authority, both for the validation of the arrest and for the final decision on whether or not to surrender the detainee.”, Stated in a statement.

For his part, the undersecretary Franco Gabrielli noted that “there was a European arrest warrant”E Italy had to “respect” her, after criticism of why Puigdemont could recently go to France without anything happening but in Italy he has been taken to prison for a few hours.

For its part, Gonzalo boye, Carles Puigdemont’s lawyer, attributed in a telematic press conference the arrest of the former Catalan president in Italy to the fact that “someone has over-motivated the policemen at the Sardinia airport” and to a “sort of deception” of the Spanish justice to the General Court of the European Union (TGUE).

The Catalan independence leader Carles Puigdemont declared and was released

Carles Puigdemont, one of the leaders of the Catalan independence movement, was arrested in Italy