The 17 best Spanish cheeses, according to the World Cheese Awards: what they are like and where to buy them 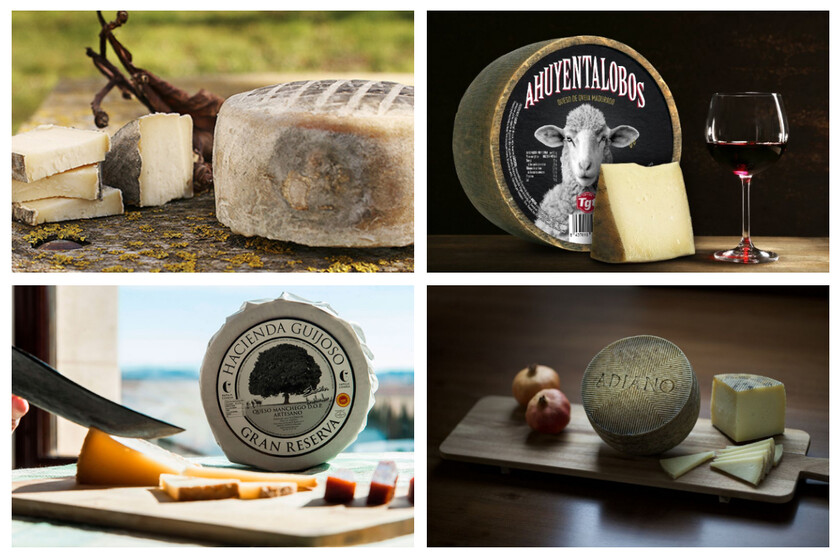 This year, Spanish dairies have not managed to overcome the mark of 27 “super gold” awards that they received in 2021 at the World Cheese Awards held in Oviedo, where a Spanish cheese dairies – Quesos y Besos (Jaén) – also won the award for best cheese in the world.

Spain, in any case, does not leave empty-handed, and returns to figures similar to those obtained in 2019 in Bergamo (Italy), with 17 cheeses qualified with the highest distinction: a seal super gold.

Undoubtedly, being the host country influences when it comes to getting a better rating for cheeses. Beyond political lucubrations, cheese is not a product that travels very welland it is undoubtedly an advantage –especially for less cured or soft cheeses– having to travel fewer kilometres.

The best Spanish cheeses in the world

Among the 17 Spanish cheeses that have achieved the super gold qualification, we find everything, including cheeses from large multinationals such as TGT or Lactalis. No problem getting these cheeses. It is more difficult to taste the prizes achieved by artisanal cheese factories, with low production, since the fame that these prizes grant makes the winners objects of desire, quickly running out of stock on many occasions. It’s time to be fast or sign up for waiting lists.

This year not a single cheese has been repeated that won a super gold medal at the previous World Cheese Awards. These are the winners:

Pressed paste cheese, made with raw goat’s milk, from the Vega de San Martin cheese factory in Madrid, located in the town of San Martín de la Vega. Its creators define it as a cheese with an intense and persistent flavour, lactic at first and with a very well-integrated acidity with notes of sweet cereal and ripe olives, with an aftertaste of dried fruit and a very elegant spiciness without being aggressive. You can buy directly from the cheese factory at a price of 19 euros per kilo.

Pasteurized goat’s milk cheese, from the payoya breed, from the El Bosqueño cheese factory in Cadiz, which is located in the municipality of El Bosque, in the Sierra de Cádiz. Cured in amontillado wine and covered in olive oil, this cheese matures between four and seven months, depending on the season and the key, say its producers, is in the double-fermented wine that is used to make this two-kilo cheese. It can be purchased through its website, but it is not yet for sale.

A very popular cheese on many restaurant cheese boards. Made with raw milk from Cerdanya, this Catalan cow’s cheese is a pressed and uncooked paste, characterized by having a washed rind. It is made in the Moli de Ger cheese factory, in Girona, and can be easily found in certain specialized stores such as Qava, Poncelet or Formaje.

Made by the Los Payuelos cheese factory (Sahelices del Payuelo, León), this cheese is already an old acquaintance of the World Cheese Awards because it was awarded SuperGold in 2010 and 2018. It is a large-format blue cheese (10 kilos) that is made with pasteurized sheep’s milk, which offers a creamy and melting cheese, soft to be blue, with notes of almonds and nuts. Its price is around 55 euros for a wedge of about three kilos and you can find it on this leondecompras website.

In this case, we are going to Badajoz to discover the Buenavista cheese factory (Ribera del Fresno) with a cured raw sheep’s milk cheese with a medium format cheese (450 grams), intense, powerful and very well aged, which faithfully represents the strength of sheep’s milk and whose unit can be purchased for 9.5 euros on the Quesería Buenavista website.

A commercial cheese, since it is easy to find in mass consumption in supermarkets and hypermarkets such as Alcampo, Hipercor or Carrefour, but it demonstrates the democratization of good cheese from the World Cheese Awards with this Cured sheep’s milk cheese that is made in the Navarrese valley of Baztán and that is sold in wedge format of 250 grams and in whole pieces of kilo and three kilos.

It already had a silver medal at the 2021 World Cheese Awards and now endorses its success with a gold medal for this pasteurized goat’s milk cheese that undergoes a brief maturation period of at least 30 days. The result is a soft, creamy cheese with an edible rind and a weight of around 400 grams, which is made by the El Sereix cheese factory, in the Alicante municipality of Mutxamel, and which can be purchased at multiple points in the province of Alicante and in the Poncelet specialized store.

Read:  Album of the World Cup, the difficult task of hitting the summoned

Organic cheese made with raw cow’s milk from the Betara cheese factory, located in the Barcelona municipality of Perafita, which does not surprise cheese experts as it has already won a gold and two silver medals in the last five editions of the awards. Tasty, tender, buttery and with a pleasant milk sensationthis medium format Betara cow cheese (450 grams) can be found on their website and in some Carrefour supermarkets.

This is the second time that this León cheese factory sneaks into this edition and, curiously, it does so with a very different register, since they also make this mule leg with sheep’s milk, but that demands a maturation that extends up to the year. Powerful and intense, with an edible rind, you can buy this cheese online at La Tienda Online de León.

We are going to the Canary Islands to discover this cheese from Lanzarote (from the Finca de Uga cheese factory) that is not a rookie, since in twelve years of competition it has become SuperGold four times. A milestone for this raw sheep’s milk cheese which, after curing for about five months, is released on the market with about 450 grams of cheese that cannot be purchased online.

We are still in the Canary Islands, but we go to Quesos Bolaños, in Las Palmas de Gran Canaria, where they make this cured Pajonales, a large-format raw goat’s milk cheese for which they use herds from the south of the island and which, after maturing for about 10 months, is put up for sale in sizes of four or five kilos and that you can buy online at La Ventita del Foodie at 7.5 euros for a 275-gram wedge.

Cheese with honey and oregano Villarejo

Made in Villarejo de Fuentes (Cuenca), with this honey and oregano we go to a cheese that is also known in the circles of cheese awards. We are talking about a cured cheese raw sheep’s milk with a natural rind of chestnut honey and oregano which is left to mature for at least six months. It is sold in various formats, including a one kilo version that is made with pasteurized milk and all the options can be purchased on the website of the cheese factory itself.

A somewhat eclectic cheese made in Cádiz by the company Alimentias, but whose final consumption is usually oriented to the German public. This cheese is quite unique as it is a sheep’s milk cheese that is left to mature in underground caves inside old sherry wine casks.

The first Spanish cheese factory certified with Animal Welfare has also struck gold at these World Cheese Awards, in this case with Viejo, a raw sheep’s milk cheese that after maturing between 8 and 12 months is put up for sale. Intense, creamy, with a remarkable perfume of fresh milk, Adiano is made in the municipality of El Campillo (Ciudad Real) and all its cheeses can be purchased on its website.

Eyes of the Guadiana Reserve

Made by a cooperative in Daimiel (Ciudad Real), this Manchego cured cheese is made with pasteurized sheep’s milk and is also a regular in cheese competitions nationwide. although since 2015 it had not touched gold or silver at the World Cheese Awards. It is compensated in this edition with its Black Label, the top of its cheeses, which spends twelve months maturing and is marketed in whole format and in 250-gram wedges.

It was pointing ways in 2021 and now, in 2022, SuperGold becomes one of the best sellers of Hacienda Pago Guijoso, a cheese factory and winery that produces this Manchego cheese cured for a year with the raw milk of its sheep to offer an intense cheese, with a great aftertaste and a lot of flavor that you can buy on their own website.

A commercial cheese made by Lactalis with mixture of goat, sheep and cow milk It also demonstrates the good level of industrial cheeses, as is the case with this cured cheese that can be easily found in markets, supermarkets and hypermarkets, and in other centers of mass consumption.

In DAP | The biggest cheese competition in the world is held today in Oviedo: this is how the World Cheese Awards work
In DAP | The 27 most delicious cheeses on Earth (for the most cheese lovers)

The 17 best Spanish cheeses, according to the World Cheese Awards: what they are like and where to buy them

Direct to the Palate

Creel wins the “Best Tourism Villages of the World 2022” award

The winners of the TikTok Awards 2023