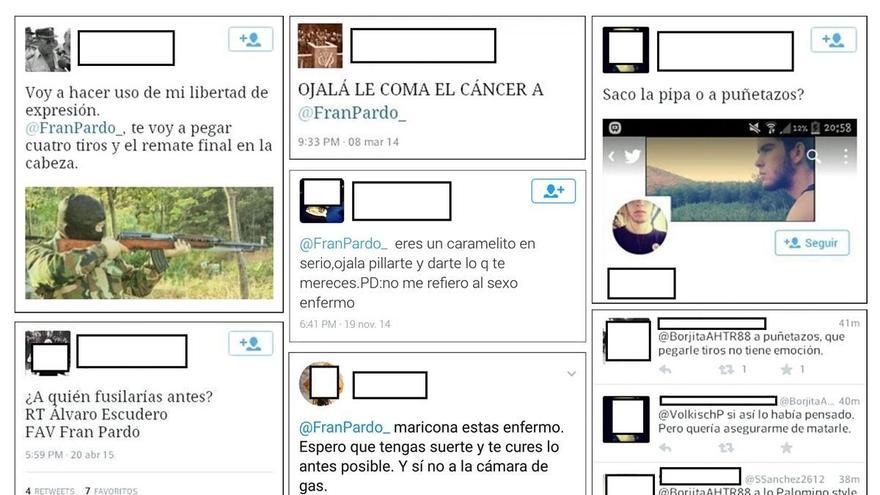 The Ciutat de la Justicia de València will host next Wednesday, January 12 a trial against several neo-Nazis who threatened to kill Fran Pardo, an LGTBI activist, on Twitter. The events date back to the years 2013, 14 and 15, when the complainant was between 17 and 18 years of age. Several people of far-right ideology will sit on the bench after writing death threats. They have been able to identify several people, but not all, since reported more than 20 tweets.

After 2 postponements, on Wednesday the 12th they will put some of the neo-Nazis who threatened me with death through Twitter during 2013, 2014 and 2015, when I was between 16 and 18 years old, because of who I am.

The examples leave no room for doubt. “I am going to make use of my freedom of expression. I am going to hit you four shots and the final shot in the head”, “You are a caramelito, seriously. I hope to catch you and give you what you deserve. I do not mean sick sex” , “I take out my pipe or punch”, “I would like you to bust, son of a bitch”, are some of the intimidating messages that Pardo received, some with spelling mistakes included.

After two postponements, the case will be settled in the courts if everything goes according to plan. It’s been seven years of waiting, seven years in which Pardo has lived in constant fear that threats could be carried out: “I was afraid of crossing one of those anonymous people on the street and that they might recognize me. I have given up part of my freedom to try to preserve a sense of security. And all because of their irrational fear, “says the affected person.

Read:  Moviegoers will be able to vote on Twitter for their favorite movie to win the Oscar

“With the Internet issue it is very difficult to track but depending on who, when you make jokes it seems that things are not so complicated. I encourage people to report and make noise to make visible the impunity that continues to exist. If you receive threats, report it, please“, he exposes.

“When I was about 17 years old the threats began, I denounced them when I was 18 years old, in 2015. I did not denounce them before because I was a minor and I did not want to do it so that my parents would not find out. As I gained more followers the threats were going to more and they began to be less anecdotal and more worrying, “argues pardo.