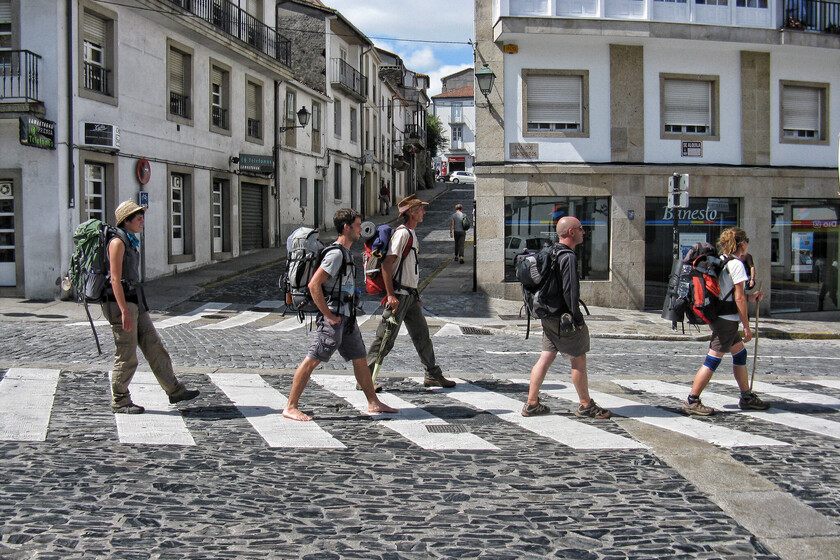 There are difficult ingredients to pair. Tourist exploitation and daily tranquility, as the residents of Santiago experience with increasing annoyance, is a good example. In addition to being the capital of Galicia, a cultural center and home to a valuable heritage recognized by UNESCO for more than 35 years, Compostela is the culmination of the Camino de Santiago, one of the great European religious pilgrimage routes and a claim that attracts every year to thousands of visitors.

That is an economic boon for those who live in and around the city. And, in a certain way also, a martyrdom that turns the placid Galician city, with 97,900 registered residents, into the latest example of the extremely complicated balance between being a residential city and a tourist destination.

What does the data say? Well, there is little room for interpretation. Santiago de Compostela supports, especially in years like 2022, considered “Saints”, a strong tourist pressure that has little to envy other destinations such as Barcelona or Seville. Between July and September 2019, the last year free of the “pandemic effect”, the INE registered 283,700 tourists in the city’s hotel accommodation. Not bad for a city that does not reach 98,000 officially registered, although it is true that unregistered students linked to their university also reside in the municipality.

After the setback of the pandemic, everything indicates that the flow of pilgrims and tourists will be especially high in 2022. On July 24, the Pilgrim’s Office distributed the Compostela —the certificate of having completed at least a minimum part of the Camino— number 200,000 of the year , a mark that had never before been achieved so soon. In July alone, the institution dispatched almost 67,400 certificates. The total flow is probably much higher because not all pilgrims decide to pick up their credential. It is also joined by many other visitors from outside the Camino.

This is how youth enters @diocesiscocordoba to Santiago. Always with the spirit up and posting “This is the POPE’S YOUTH” pic.twitter.com/W8xaJD4Wl0

Is it noticeable in the economy? Yes, of course. Years ago, a study by the Spanish Federation of Associations of Friends of the Camino concluded that in 2012 pilgrims left 22.4 million euros in Compostela and in 2010, another Xacobeo year, 36 million were reached. Added to these sums is the wealth generated along the entire Camino. “It not only affects Galicia, but also another 140 municipalities and the entire community indirectly”, highlights the Xunta.

Pilgrims are also not the only tourists who come to the Galician capital to enjoy its heritage, gastronomy and the landscapes of the region. The latest data from the INE show that in Santiago there are 155 hotel establishments that directly employ 930 people.

Read:  It is now possible to play Halo Infinite in third person

And in the streets? Well, on the streets it is also noticeable. And not always for the good. The residents of the city have already expressed their discomfort at the overcrowding of tourists and the issue has fully entered the local political debate. For weeks now, three neighborhood entities have been distributing a “decalogue of good practices for the final stretch of the Camino” to achieve a far from simple task: to harmonize the avalanche of visitors and pilgrims with the life they continue to lead in their homes and city.

Aware of the problem, the Compostela City Council even speaks of a “local agreement for sustainable tourism”. As required The vanguardthe great movement of pilgrims this summer has even caused neighborhood complaints in Sarria, a town where many begin the Camino.

Is there controversy? Yes, on social networks and in public institutions. Several days ago, photos went viral showing how young people attracted by the 2022 European Youth Pilgrimage crowd the streets of the city, an event that —according to data provided by the Church— attracted around 12,000 kids to Santiago. The deployment was accompanied, at least in some cases, by shouts and chants in the middle of the street, between lodgings and inhabited buildings.

BNG or Compostela Aberta have already pointed out a tourism model that they see as “invasive” and “unsustainable”. And although from the local government, governed by the PSOE, it is ensured that the neighborhood tensions are not general – they limit them to “specific areas and moments” – they recognize their “concern”.

The vision is different in the Xunta, also based in Compostela but in the hands of the PP. A few days ago, President Alfonso Rueda slipped that “ideological positions” are hidden behind the criticism and settled, in statements collected by elDiario.es: “as long as the influx of pilgrims occurs with civility, with order and without disturbing anyone, beyond what the presence of many people at a given time may entail, that does not harm anyone, quite the contrary”.

Is Santiago an isolated case? No way. Other large tourist destinations have already grappled with the difficult balance that being a large tourist city requires, between welcoming thousands of visitors who come in search of rest, fun or as the culmination of a long journey, and neighbors who continue to get up early and go to the office . A similar challenge is faced, among other cities in Spain, by Seville, Valencia, Malaga, Palma de Mallorca, Madrid or Barcelona, ​​a city in which tourism also plays a vital economic role and which has faced a complex debate over tourism-phobia for years.