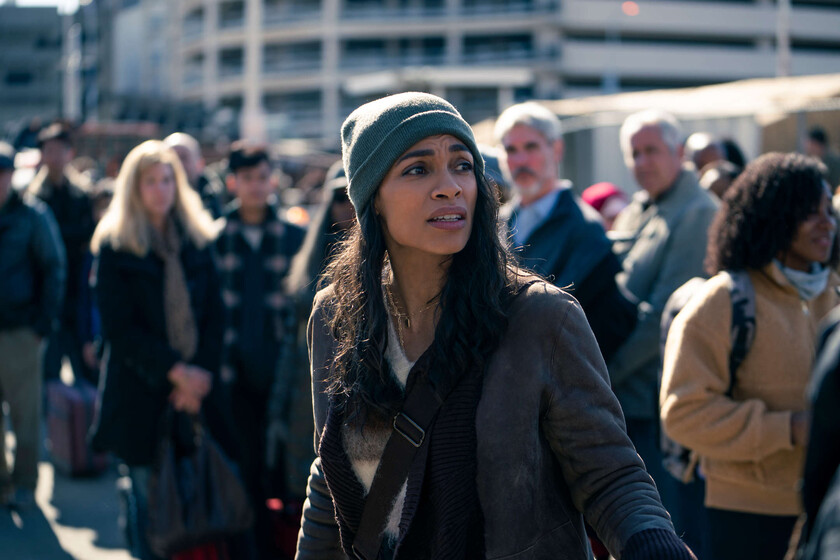 I admit that I really wanted to see ‘DMZ’, the adaptation of the homonymous comic that comes from the hand of Ava DuVernay (as producer and director of the first episode), Roberto Patino as screenwriter and the umbrella of HBO Max for everything else. The result is four hours that, for better or for worse, they seem somewhat insufficient to explore this world.

Rosario Dawson heads production as Alma Ortega, a doctor who works as such caring for immigrants and refugees during a future second American civil war. She will soon decide to enter the Demilitarized Zone located in Manhattan to look for her son, who was left behind during the evacuation of the island.

Distancing himself from the comic

There are things that are a bit surprising when you see this adaptation, especially if you’ve read the comic, and I’m not exactly referring to how they take different paths (alternatives) when exploring histories of this demilitarized Manhattan.

I mean, beyond being in the world created by Brian Wood and Riccardo Burchielli, they have little to do with comics and series beyond sharing characters. Both because of the time frame (here eight years have passed since the start of the war instead of five) and the characters (in the comic Alma/Zee never left the island). Needless to say, there is no trace of the journalist who stars in the comic.

On the other hand, it is noted that Roberto Patino has on his resume being a screenwriter for series such as ‘Sons of Anarchy’. There is a lot of influence here in the style, in the way of presenting this story as a family tragedy in a criminal setting. Also in the rhythms, in just over five minutes we are presented with the premise.

Read:  Alligator Loki will have his own digital comic

Something that I highlight because currently the miniseries are not usually so agile in their presentation. We could practically say that ‘DMZ’ has more chain rhythm than network or basic cable than HBO and even Netflix. The problem is that it has that same shallow depth in a cursory look at a country at war.

And it is in the setting where perhaps the fiction fails the most and, we could say, separates itself from the comic. Beyond because the dialogues remind him and from some border appearance of the armed forces, instead of in a demilitarized zone isolated from the rest of the world it seems that we are in the neighborhood of ‘West Side Story’. There is no sense of danger of the comic and much less of shortages.

This lack of sense of urgency, that we are in a world that has gone to waste, subtracts many points from a proposal that starts from the same premise. More than a second civil war, we are facing a gang war with elections for governor as the common thread. And time (four hours) is no excuse, because they are things that can be shown even with limited time.

In short, what remains is that, despite being effective as a story, ‘DMZ’ it is much more generic than it promises in his portrait of demilitarized New York. Not only if we compare it with the comic, but as a separate work, its setting fails a lot.

How effective are the cybersecurity and cyber resilience of Banking in Mexico?

one of the most interesting phones of the year