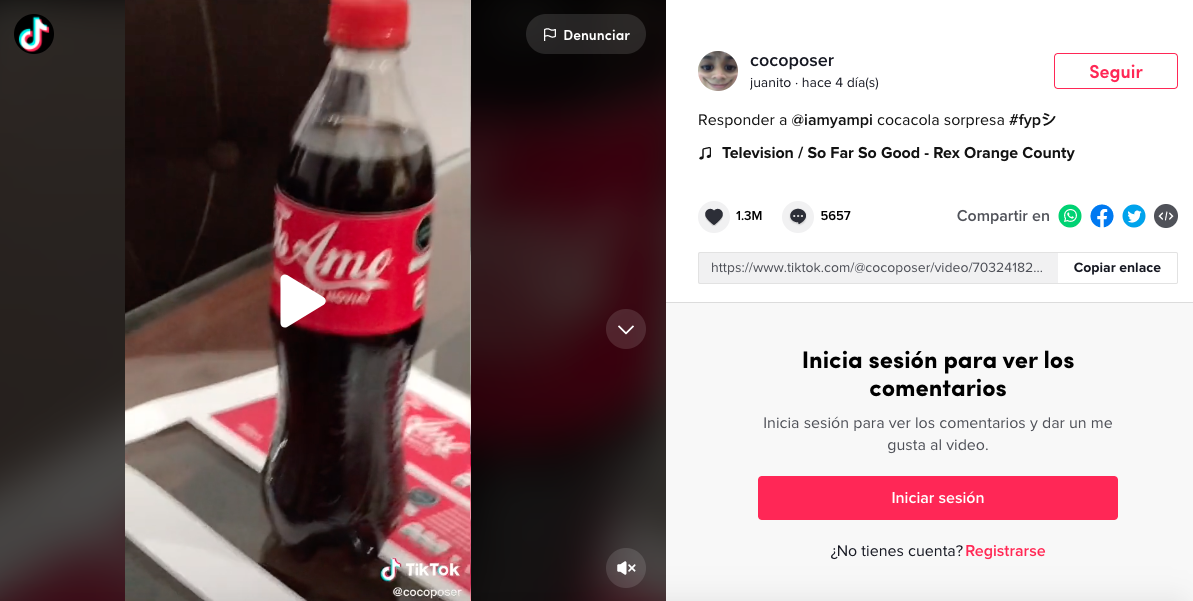 A user is conquering the tiktokers thanks to having redesigned the label of a Coca-Cola bottle to make a declaration of love.

There are contents in social networks of all kinds and for a large number of audiences, which is why those who dedicate themselves to such work must think very well what they want to show in their accounts.

In recent years, social networks have become interesting platforms in terms of content creation; Today, many tiktokers, instagramers or other influencers have positioned themselves so much that they only base their monetary income on what they upload to their respective profiles.

Of course, due to the great success that these platforms have had, the demand for those who want to dedicate themselves to the creation of content on social networks increases more and more, but only a few manage to conquer Internet users.

Achieving it depends, to a large extent, on the “products” that they upload or develop thinking that their audience will have a positive response; some are successful and others fall by the wayside.

The case of the tiktoker @cocoposer

All this comes to light thanks to the contents of a tiktoker named @cocoposer, who, among his videos, is dedicated to redesigning the labels of some brands to make a declaration of love. This he does at the request of his own followers.

Read:  This is how the improved Google Lens with MUM will work

In this way, one of his contents that is attracting attention is what he did, precisely, with a Coca-Cola label, which he redesigned with love phrases as a way of asking someone if he wants to be his girlfriend.

In his video, which so far has more than nine million views, more than a million likes and hundreds of comments, he shows the entire process, from the moment he goes to the store to buy his bottle of Coca-Cola. , redesigns the brand’s labeling and turns it into a declaration of love:

In that sense, the brand became the ideal space for a statement, which speaks of the inventiveness of some content creators when developing their ideas.

Undoubtedly, creativity is what can be the difference between being successful or not in social networks, something that is becoming more and more complicated due to the high demand for influencers or content creators that exist on the network.

TikTok is the social network that, since the arrival of the pandemic, has conquered Internet users to such a degree that, to this day, it already has more than one billion users, an achievement that it achieved in just five years of existence.

The numbers of the ByteDance platform, however, continue to grow and this has represented a danger for platforms such as Instagram, YouTube, among others, which have even launched functions very similar to those of TikTok.