Noelia Tomoshige, from the Monroebakes pastry shop in Getafe (Madrid) is the revelation pastry chef of Madrid Fusión 2023 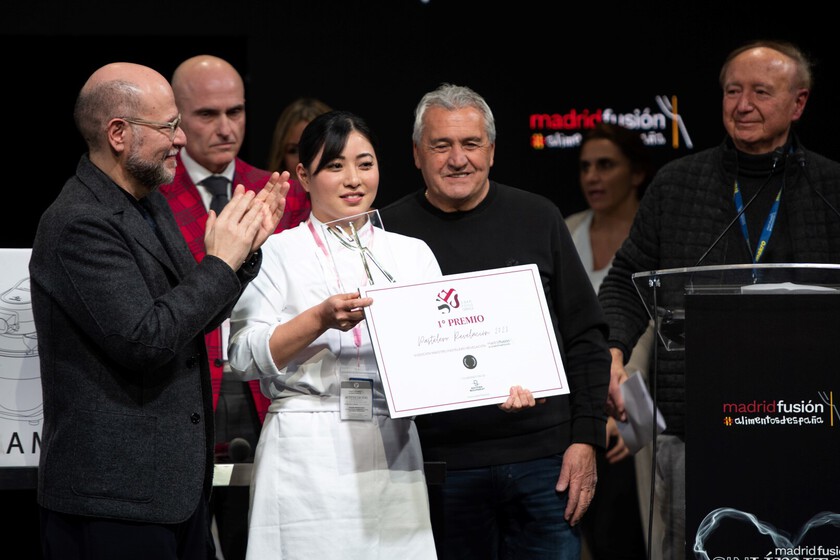 Shortly before Javier Rivero and Gorka Rico became the revelation chefs of Madrid Fusión 2023, the congress presented the equivalent prize for the sweet world, rewarding the work that Noelia Tomoshige is making in his workshop in Getafe (Madrid), the artisan pastry Monroebakes. Opened in September 2021 in the Madrid city, this charming local is revolutionizing the sweet world of the area and attracting more and more visitors who seek to enjoy their sweets as beautiful as refinedtasty and not cloying at all.

The 32-year-old pastry chef has already conquered the president of Madrid Fusión with her creations, jose carlos capelwho was full of praise for his work in his criticism for The country. In her workshop, and with the help of her husband Zhen and confectioner Anna Drosky, they create sweets that fuse the three cultures that Tomoshige says define her work, Japanese, Spanish and French, and where she gives free rein to the sweetest creativity.

Born in Seville to Japanese parents, Noelia Tomoshige’s paths did not begin directly in the world of pastry, a bug that bit her after having tried other worlds of work, and without having a tradition in her family. After exercising professional swimmer in Seville and graduated in Tourism in Madrid, with a stay in the United States in between, and finally a Japanese pastry course that was taught at the school Fair Beau Tokyo from the Japanese capital awakened his passion for sweets.

Back in Madrid he tried to perform the pastry course from the prestigious school le cordon bleu, training that he assures changed his life. “I was so dazzled by this world that I decided to completely abandon the career I had built in the world of retail deluxe for more than ten years to dedicate myself fully to patisserie”, she says.

Read:  Auctioned for 5,100 euros the best truffle at the Vera de Moncayo Fair, weighing more than half a kilo

In his creations one clearly perceives the French academic training in aesthetics, presentation, techniques and shapes, as well as in the play of colors and combinations of textures, a tradition that has also influenced Japanese pastry, very attracted to the French sweet world. To this is added the Spanish personality and the more Andalusian tradition that she knew as a child, always contributing her own personal stamp.

His pieces are elegant, not heavy at all, with low sugar and surprising in the intensity of flavors and subtle aromas, with elaborations that seem like luxury pieces, fragile and at the same time imposing, that seek to brighten the palate with unexpected flavors for the Spanish public.

The second prize has gone to the pastry chef Irene Junts of the Son Jaumell restaurant in Capedepera, Mallorca, while in third position the work of Arnau Casadevallhead chef at Divinum, in Girona, who has also just won the award for best chocolate dessert The Best Dessert 2022 at the Gastronomic Forum Barcelona.

Photos | Madrid Fusion – Monroebakes
In DAP | Javier Rivero and Gorka Rico, from the Ama Taberna de Tolosa restaurant, revelation chefs at Madrid Fusión 2023
In DAP | The best sandwich in Spain is from Marbella and this is his recipe (although the author prefers a good ham sandwich)