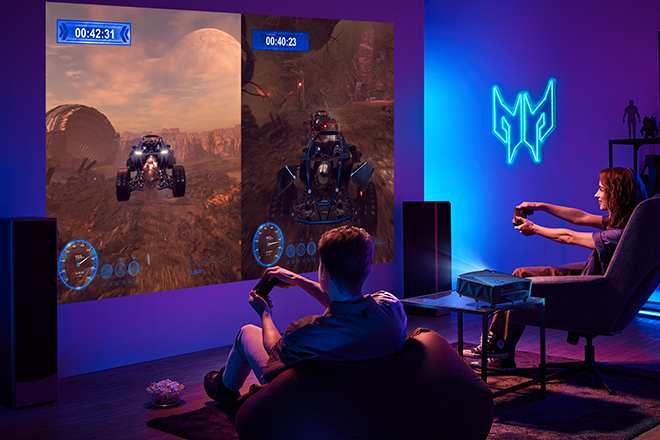 Acer continues to present news for this fall and if yesterday we knew the arrival of the L811 projector, a model of 4K laser home theater ultra-short throw, today it is the turn of two models with conventional throw and with a focus clearly gaming.

It is about the Predator GD711 and Predator GM712, two teams designed for players looking for a large diagonal and specific functionalities for this type of content.

The most advanced model in this range is the Predator GD711, a DLP-type projector with LED light source whose half-life is around 30,000 hours and that offers a 4K resolution (3840 x 2160) compatible with HDR10.

It is able to offer a color palette corresponding to 125% of the Rec. 709 space and offers some more than remarkable 4,000 ANSI lumens of brightness, which in theory should allow its use in rooms with a certain ambient light, achieving a dynamic contrast of 2,000,000: 1.

The projector will have several preset picture modes, including one for cinema with the maximum resolution of 4K, but also another specific for high frame rate games that displays a resolution of 1080p at 120 Hz or 240 Hz, the latter in the case of having it connected to a PC.

According to the manufacturer, it has a projection ratio of 1.22, so for example we can have a diagonal of 100 inches with a projection of only 2.70 m. It also offers us an Eco operating mode that lowers noise down to 23 dBa, although we assume that it will also reduce the light output offered on the screen.

Connectivity is covered by two HDMI 2.0 ports, audio output for external stereos, although we also have 5-watt auxiliary speakers built into the housing and three USB Type A ports, one for the projector’s hidden wireless dongle, another for connecting wireless accessories, and a 5V DC output that also allows you to update the firmware of the device.

Finally, note that the projector has a integrated app market that allows users to directly access services of streaming video without the need for other external equipment, connecting to the Internet through its wireless connectivity.

The other gaming projector announced by Acer has been the Predator GM712, a model also with an external appearance oriented to games, but that loses some functionalities with respect to its older brother.

On this occasion, the DLP projection uses a light source based on Incandescent lamp traditional with a light output of 3,600 ANSI lumens and a maximum half life of 15,000 hours in Eco mode.

4K resolution is maintained in cinema mode, the mode for games with 1080p resolution up to 240 Hz in game mode, as well as the connections and the possibility of accessing the streaming content platform wirelessly.

The Predator GD711 projector will be available in Spain from December from 1499 euros, while the Predator GM712 will go on sale from January 2022 from 1,399 euros.

this is Cecotec’s Top 10 sales in heating

which one to choose and how to prepare it

so you can take advantage of this limited offer

these are the news of the service, price and improvements in your app