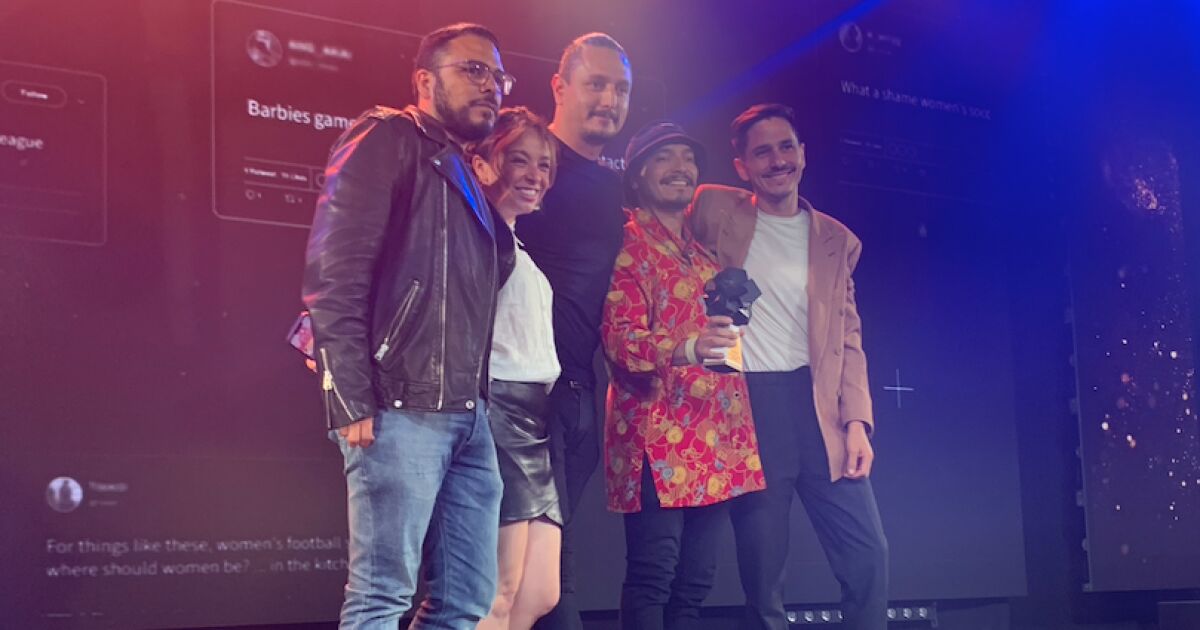 Everyone called her Mario, but she was really a woman looking for an opportunity on the court. The initiative was worked for the Mexican National Team. It had 139 million impressions, with a 100% positive impact on the audience and more than 1.5 of earned media.

The campaign won a gold in the category of content videoa silver in video for social amplificationa bronze in brand building and the special award in the diversity category.

“Femexfut is a client that we have had for several years and the marketing challenges it faces are very peculiar. So the idea for the campaign arose from the need to break the stigma that soccer is only for men. It took three months of work and Oriental Films did the production”, describes Sergio Escamilla, general manager of Media Monks México.

The second gold was won thanks to the Juanita and Roberto wedding campaign, in which Don Roberto “accidentally” uploads his wedding invitation in public mode. Digital users did not take long to invite themselves and ask for the sketch to arrive.

Later, Don Roberto uploads another video in which he introduces the bride, a 10-year-old girl. At that time the message was clear and shocking, the child marriage campaign reached 3.4 million impressions, more than 279,000 interactions and 1.2 million views. This initiative for the organization “I want I can, Girls Not Brides”, managed to get the communities to sign an agreement to ban these practices in the state of Guerrero. The metal at the IAB Mixx Awards was from the Social Responsibility and Public Service category.

On the other hand, one of the bronzes was obtained with The message of the Sun for Netflix. On the eve of the last season of the series on the streaming platform, the agency decided to use the sun, the real star. If fans pointed their smartphone at the sun, they got exclusive content from the series, before any other media or social network.

To achieve this, they analyzed sunlight for months. Every day, from sunrise to sunset, they fed an artificial intelligence different lights from the sun so that it would learn to identify them.

Thanks to image recognition, the algorithm learned to release content when light came from the sun and memes when light came from somewhere else, like a lamp. The first content released was the exclusive of the premiere date, and in just a few hours the message reached 300,000 views and more than 9 million interactions, only on the first day. The winning category was Data Storytelling.

Read:  Here are the winners of the BAFTA Game Awards 2022

The second bronze went to him with the Pass the Towel campaign for the Saba brand. With the intention of normalizing the issue of menstruation, the agency sought to break the taboo of passing a sanitary pad in public. It all started in Instagram stories, the challenge was to pass in the towel and invite more women and men to join the movement.

With the support of Unicef, more than 90,000 sanitary products were delivered to women in the communities who need them on a daily basis. And within hours, the word spread on social networks to Mexico, Canada, the United States, Brazil, Argentina, Germany and the United Kingdom. This metal corresponds to the Social Responsibility and Public Service category.

“Having been the agency of the year reaffirms how important the Mexican market is for the agency. It gives us more security to continue and focus on doing a good job for clients. At the same time, it helps us to be in the spotlight of the best talent that sees MediaMonks as the best place to work. Now the challenge is not only to win prizes in digital advertising, but also in data, craft and media”, says Escamilla.

This year, the contest’s jury was led by Silvia Dávila, regional president at Danone, while the vice-presidency remained in the hands of Diego Wallach, chief creative officer at Publicis WW, who in turn were accompanied by 24 experts from advertising agencies and brands.

The evaluations revolved around the strategy, the results and the creativity of the registered pieces. 56 campaigns reached the final stretch, but there were only four gold metals: two for MediaMonks, one for Ogilvy and one for Archer Troy. In the special awards, Archer Troy won Best in Show and Cerveza Victoria was crowned advertiser of the year.

“After two days of debate and discussion, we took as a result beyond winning pieces, a look at where the advertising industry is today and the different efforts that are being made”, said Regina Gómez, deputy director of marketing and commercial of the Interactive Advertising Bureau (IAB) Mexico.