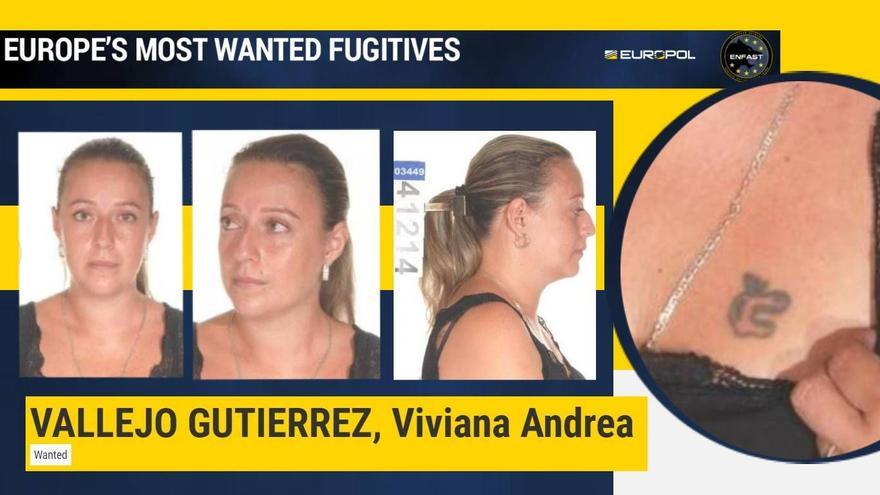 Green eyes and an apple tattoo forbidden and bitten on her left breast. Vivian Vallejo, 36 years old, has just been included by the Spanish police on the list of most wanted criminals in Europe, as CASO ABIERT, the investigation and events channel of Prensa Ibérica, has learned. In that list, the other Spanish is Antonio Angles, one of the killers The Alcasser Girls. And there is a third fugitive linked to Spain, the drug trafficker Czech Norbert Kohler, who lived in Madrid.

Viviana was not in Spain when the police entered five flats in Mieres and Langreo (Asturias), La Bañeza (León) and Elche (Alicante) last September. Agents specializing in the fight against human trafficking then released 12 women and arrested eight people. But the pimp had gone to spend a few days in her country, Colombia, and was not arrested. She has since become a fugitive and, if caught, faces penalties of up to 30 years in prison.

It was a sexually enslaved woman in one of the flats in Asturias, the one who managed to escape and tell the police how the network worked and who Viviana Vallejo was. Like her, other young Colombian women, almost all of them from Pereira, one of the poorest areas and punished by violence in that country, received the offer to come to Spain in exchange for paying 1,500 euros. Upon arrival at Barajas airport, they were told that their debt it was already 3,000 euros and that they should pay prostituting in a flat where would they be locked up.

Viviana Vallejo was the one who ran that apartment in Elche and controlled the women, according to that survivor. Each two victims shared a room, the same one they used for sexual intercourse, and they had to be available 24 hours up to date for customers. In addition, they had to offer cocaine and viagra to increase the benefits of the network. During the searches, the police found €15,000 Y an accounting book with the detailed income generated by each woman for Viviana’s plot.

Read:  iPad Air or iPad mini, which one should you buy?

Police sources explained that Vallejo used, in addition to international recruitment, “what we call internal trafficking of women. These networks are always looking for potential new victims because clients get tired of seeing the same women. With the Covid and the difficulties in bringing victims from outside of Spain, this type of agreements between women trafficking networks located in different provinces”. Viviana needed to renovate her apartment in Elche with new women to “exchanging women as if they were cattle”police sources explain.

This is how the girl who finally managed to escape and denounce the plot arrived in Asturias from the Elche apartment. a group with three floors in Mieres and Langreo and one more in La Baneza (Leon) exchanged women with Viviana’s network in Elche to facilitate “fresh meat” to the clients.

As in many sexual exploitation organizations, the victims had to sleep together, two by two, in 1.35 meter beds They were also used for sexual intercourse. So when a client came in at four in the morning, the other woman had to go out and wait for them to finish so she could then come back and sleep. In addition, the women they were threatened with harm to their families in Colombia if they did not comply with what was required of them.

Viviana is already included in Europol’s most wanted fugitive list and very soon she will be on the Pact, a project to locate fugitives from Latin America, Spain, France, Italy and Portugal. His background points to a sad story but also of ascent in the world of prostitution. He began as a victim, prostituting his body and has ended up becoming exploitative of other women. In his network there were also a man, who was brought to Spain to dedicate it to male prostitution. Months later, she had followed in her boss’s footsteps and risen through the organization. He was arrested.