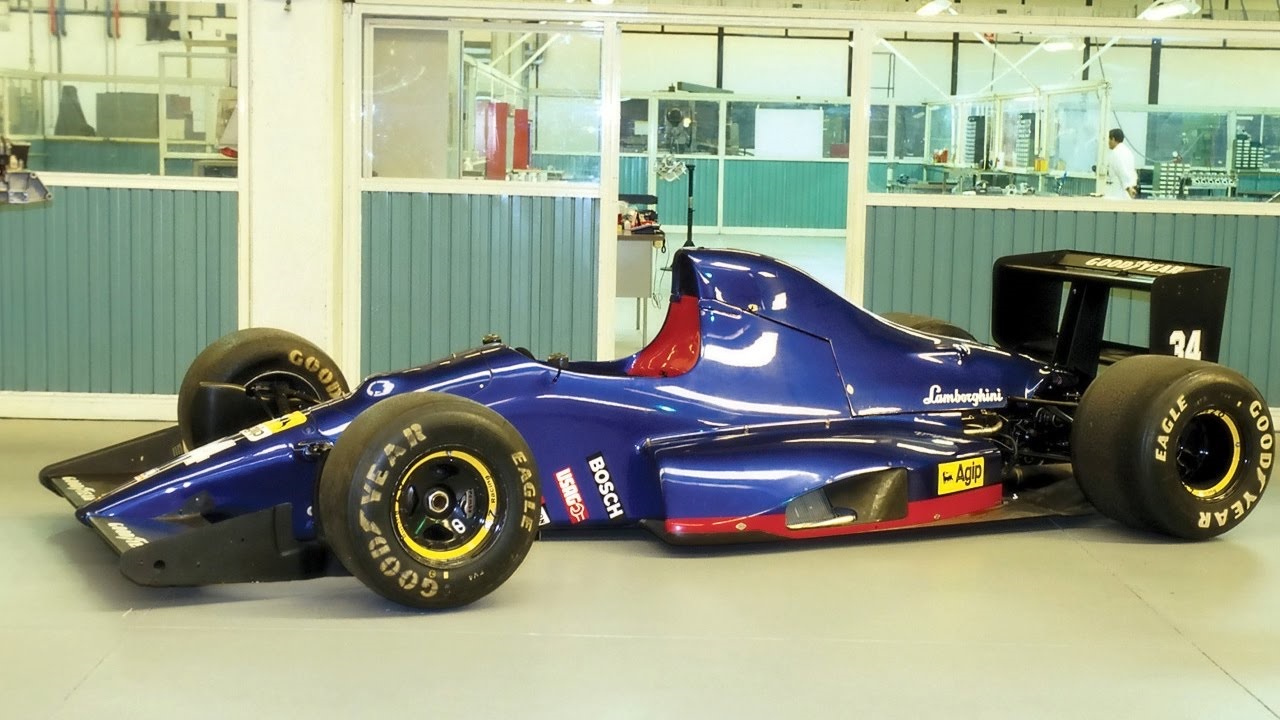 His father, Reclus, worked for Ferrari. He himself had joined the company as an apprentice in the spring of 1960. From the end of 1961, at almost 27 years of age, he had become the technical director of the most famous name in racing.

But at the beginning of 1987, Mauro Forghieri was fed up with a company in which Enzo Ferrari no longer had power. He himself had been displaced, between voluntarily and by management decisions, to a new experimental department. At, Forghieri studied integral traction and created the 408 Integralewhich years later would be a reference for the Ferrari FF.

He had spent 27 years at Enzo’s side, creating one of the most legendary couples in motorsport history. But at the Geneva Motor Show it was time to leave Maranello. It was there, in early 1987, that Chrysler’s Lee Iacocca told him that he wanted him at Lamborghini. The firm from Sant’Agata Bolognese had been acquired by the American giant. It was also the natural rival of Ferrari. But back to Modena on Iacocca’s jet, Forghieri signed a declaration of intent. Shortly after, in May, he left Enzo Ferrari forever.

Forghieri, however, had told Iacocca that his interest was in sports, not street cars. However, Chrysler could not directly participate in sports competitions, nor could its subsidiaries. But he assured her that they were interested in participating as suppliers in Formula 1. So the Modena engineer went to work designing a new naturally aspirated engine for 1989taking advantage of the change in regulations for the world championship with the end of turbo engines.

In less than a year, the engine was ready for testing. Chrysler was in crisis, so the engine had to be cheaply built, reliable, and easy to assemble. The idea of ​​supplying leading teams led to being a client of small teams. But the 3.5-liter 80-degree V12, starting at 600 horsepower, was honest engineering. And that Magneti-Marelli had not been a provider of some innovations that Forghieri himself had helped develop while at Ferrari, having to make use of Bosch electronics.

The Lola team was the only one to use the engine in 1989, and it proved problematic, but Philippe Alliot managed to score in Spain, at the end of the season, with a sixth place. In 1990 they increased the power and equipment, adding Lotus. This was already a more serious team, but the results did not improve spectacularly, except for Aguri Suzuki’s podium finish with the Lola at the Japanese Grand Prix. A third place that fueled hopes for 1991. Because that 1990 had begun the construction of its own single-seater by Lamborghini Engineering, the racing department created by Forghieri in Modena, separate from the factory.

Actually, the story is somewhat confusing. Mauro Forghieri remembers that at the beginning of 1990 they had been commissioned by the directors to manage their own single-seater, entirely manufactured by and in Lamborghini. However, shortly after the proposal arrived from a Mexican business consortium that had the young Fernando González Luna at the head, who put 20 million dollars for the development of the car to found a Mexican team which would be called GLAS – an acronym for González Luna Asociados. Mauro Forghieri as technical director, with the help of designer Mario Tolentino, got down to business.

As a young man, his interest was aeronautics, not cars. Perhaps for this reason, in what would end up being his last car in Formula 1, Forghieri looked at the fighters again. The brilliant Italian engineer wanted to find a solution for the radiators, which were always placed frontally and vertically, which affected the aerodynamic flow. His idea, which is still used, was to place them inclined. But also, glue them as much as possible to the monocoque.The result was air intakes very similar to those of airplanes, with minimal and rounded pontoons. It was a model different from the rest.

Forghieri himself acknowledges that it was a valid solution, but that it required a lot of investment for its study. He even discussed it with Gordon Murray, whose designs were characterized by novelty, and found it very interesting. But problems arose. With the car ready and about to embark in Paris for Mexico, the news arrived that González Luna had disappeared. Strangely, the payments kept coming. But all the material returned to Modena. The project was up in the air.

But then came the interest of the Italian Confindustria Vice President, Carlo Patrucco, who, together with Lamborghini itself, put up money to keep the car going. Yes indeed, Lamborghini’s fundamental condition was that the team not bear his name, so it was called Modena Team SpA, based in the Italian city. Many tests were carried out with Mauro Baldi, although finally the starting drivers would be the Italian F3 champion, Nicola Larini, and the F3000 runner-up, the Belgian Eric Van de Poele.

The chassis, however, was entered by the FIA ​​as Lamborghini 291 for the 1991 world championship, but under the management of the Modena team. For everyone, that curious blue car was a Lamborghini, but the firm did not want direct confrontation with rivals like Ferrari. It was their first direct experience in F1, and they also had to go through the pre-classifications, with the risk that this entailed. In fact, in the first GP, the United States in Phoenix, Van de Poele did not pre-qualify for the race, but Larini placed the car 17th, and in the race he achieved a fantastic seventh place in goal. A hopeful start. But it was a mirage, because neither of them was pre-classified in Brazil.

Read:  The dilemma of the Lamborghini Huracan Sterrato, exclusive or unlimited in production?

Then came the home race, the San Marino GP at Imola. Nicola Larini did not qualify, but this time Eric Van de Poele put the car in twenty-first position on the grid. It would be his first Grand Prix. Sunday started off with rain, with the iconic image of Alain Prost crashing out on the formation lap of Rivazza and retiring before the start. Van de Poele started well, passing the first lap in fifteenth place. With a well-timed switch to dry tyres, the Belgian continued to progress to fifth place.

Behind him, it contained Mika Häkkinen’s Lotus. Both were lapped multiple times by the leader, Ayrton Senna, who would go on to win the Grand Prix. But the Modena was rolling well. In his first race, Van de Poele was going to score points, giving the first points to the camouflaged official team. Arriving at Variant Alta, the engine misfired. The pilot radioed his engineer, Dave Morgan, “What can I do?” The answer was devastating: “All you can do, Eric, is cry”. She didn’t understand it, but the telemetry was reaching them on the wall that they were out of gas.

The Lamborghini 291 went down to Rivazza, went through the Variante Bassa, and there was the checkered flag. The car stopped hopelessly, and any chance of a good result vanished. A mechanic had not verified that the tank was completely full. Back then it was a slow and painstaking process. He trusted the obvious, but a few liters of fuel were missing. The pilot got out of the car, but “he was not disappointed because he knew that he had made a good race.” He officially finished ninth, but the team, though hurt, saw this performance as good news.

Carlo Patrucco displayed an activity in the exuberant paddock, with a huge motorhome, a first-class catering and other whims typical of Formula 1. But the money for the development of the team did not arrive with the same fluidity. And that definitely affected the project: in the next five Grands Prix, Monaco, Canada, Mexico, France and the United Kingdom, neither Larini nor Van de Poele were pre-classified. Only thanks to the change of the rule in Germany, the team was able to drop out of the pre-qualifications, thanks to its seventh and ninth starts of the year.

But that didn’t mean they ranked regularly. For the next eight races, Van de Poele failed to qualify in any races, meaning his only race in 1991 was at San Marino. Larini, for his part, only participated in 4 races: Germany, Hungary, Italy and the last of the year, Australia, with two sixteenths and two retirements. A poor result to end the year. In fact, Van de Poele was clear that “The engine was pretty good, but the chassis wasn’t up to the task”.

The end of the project

The team was out of funds. Lamborghini was not going to put more money and Patrucco was not particularly overflowing with liquidity. Forghieri himself had left the post of technical director in the middle of the year. He returned to the design aspect for the development of the engine for 1992. Apparently, the Modena Team SpA had commissioned the Argentine designer Sergio Rinland for a new model for 1992, which would use a Judd or Lamborghini engine. But without the support of the Italian house, the project was mortally woundedand effectively disappeared from the grills forever.

Mauro Forghieri’s Lamborghini engine continued to run in 1992 and managed to score points twice, once with Minardi and once with Venturi. In 1993 it would be 3 points with the only team that was supplied with an engine that already reached 710 horsepower. The project was not viable. But an opportunity came. McLaren needed an engine for 1994, as they wanted to get an official supplier, and not the Ford customer they used in 1993. Ayrton Senna and Mika Häkkinen tested it respectively at Estoril and Silverstone.

But it was the Brazilian who was most impressed with the engine. With a McLaren MP4/8B modified to house the Italian V12, all in white to avoid contractual problems, the Brazilian turned and turned in Estoril. It was a second quicker than it had been with the Ford. “It’s a good engine. Maybe it needs a bit of power and it’s not too sophisticated, but I’m sure next season will be better,” said the three-time world champion., who even asked to break the contract with Ford and use the Lamborghini for the rest of the year. But Ron Dennis didn’t do that, and he ended up opting for the Peugeot for the following season.

Lamborghini no longer supplied engines in 1994 and has not returned to Grand Prix racing. His legacy in the top flight is very discreet, partly motivated by a lack of funds and involvement. But Mauro Forghieri said goodbye to F1 with an engine praised by a driver as demanding as Senna and with an innovative and committed project like the Lamborghini 291.