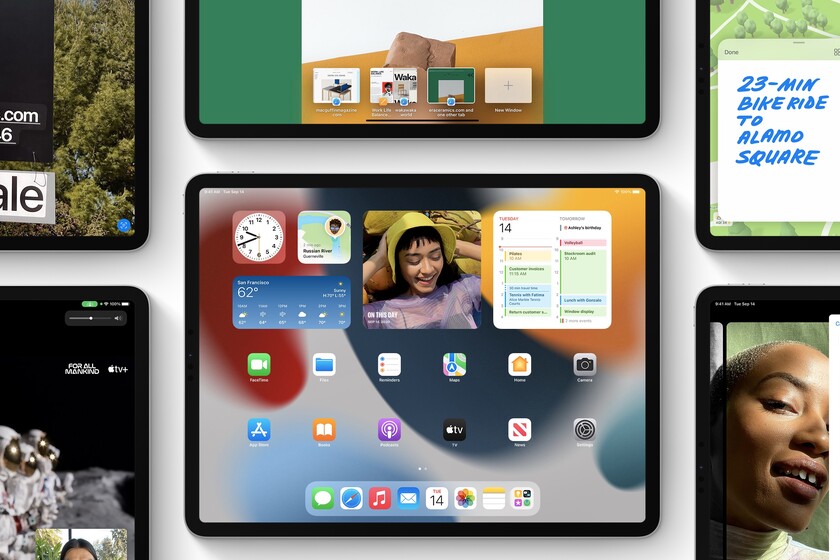 iOS 15 is not the only operating system that has just been released. iPadOS 15 can also be downloaded from right now on all compatible iPads, bringing long-awaited news and making the work we can do with the Apple tablet faster.

You can upgrade to iPadOS 15 in the app Settings, section general > Software update. While you wait for it to download, you can review all the new features of the system that we summarize below.

All the news in iPadOS 15

Focus. The iOS 15 function can also be used on the iPad, establishing focus modes to choose what can interrupt us depending on the moment and configuring appropriate home screens to work, rest and any other situation.

Home screen widgets. Finally, after years of requesting, iPadOS widgets can now share home screen space with app icons. We can place and move them, at a size adapted to the large resolutions of the iPad.

App Library. The library of applications that arrived in the iPhone with iOS 14 reaches iPadOS 15, in order to have a good automatically classified compendium of the programs and games that we have installed on the device. We will have direct access to that library in the Dock itself, and we can hide the icon pages to our liking.

Redesigned multitasking. iPadOS improves the way we can invoke several applications at the same time on the iPad, with a new button that will allow us to switch between S modesplit View and Slideover. Another new section called Shelf It will allow us to see all the instances of an application that we have open at that moment.


Improved Collaborative Notes. The Notes application will now include mentions to other users with access to the same note, a new activity side panel, or tags to classify notes.

QuickNote. Now we can use the Apple Pencil and slide it from a corner of the iPad screen to immediately create a new note to write on, wherever we are. Also, some apps like Safari will embed your content directly into those sticky notes.

Translate. The Translate application comes to iPadOS including all the functions of its equivalent in iOS and adding voice auto-translation and writing practices in other languages ​​with different alphabets. In addition, the translation of text and text-to-images is integrated into the menus and panels throughout the system.

Creation of applications. Now you can use the Swift Playgrounds application to create and run applications from the iPad itself, using the SwiftUI language. You can even send it to the App Store from the tablet itself and without the need for a Mac.

SharePlay (release later). Watch a movie, series or listen to music with people who are far away thanks to this new function to share the view between people connected to a FaceTime conference.

FaceTime improvements. Now you can see all the participants of a conference in a table, in addition to being able to improve the audio of your voice with new options of cancellation of external noise and spatial audio. You can also invite people to a FaceTime conference through a link, in the style of Zoom or Google Meet; and use portrait mode if your device supports it.

Improvements in Messages and Memojis. Now all the content that they share with you in the Messages application is integrated into Photos, in the same way that other photos in the rest of the applications will be classified automatically. In the Messages interface the photos sent in groups have a new interface, and the Memoji will have new extras such as clothes to choose from and new implants.

New Safari interface. The iPad adopts the new groups of tabs, voice search and extensions that until now were only present in macOS.

New Maps. Even though it’s only active in some cities, Maps is capable of showing you greatly improved graphics at their key locations. New traffic data and a view of the entire globe are also included.

Universal Control (release later). Together with macOS Monterey, we can use a keyboard and a mouse to use an iPad and a Mac. It will not be necessary to configure anything at all.

Privacy enhancements. We will be able to read periodic privacy reports to see which applications read our personal data, along with permission summaries that will allow us to set more limits more easily. In addition, we can use the beta version of iCloud Private Relay, which hides our browsing data and gives us options to hide our email addresses.

iPadOS 15 is compatible with all iPads capable of running iPadOS 14. Here is a list of models:

Remember that the demand for the system discharge can be very high during the first hours availability, so if you read this during the afternoon or night of September 20, 2021 you better have some patience or just wait to update the next morning.

Firefox 92 arrives with support for AVIF, better HTTPS and more