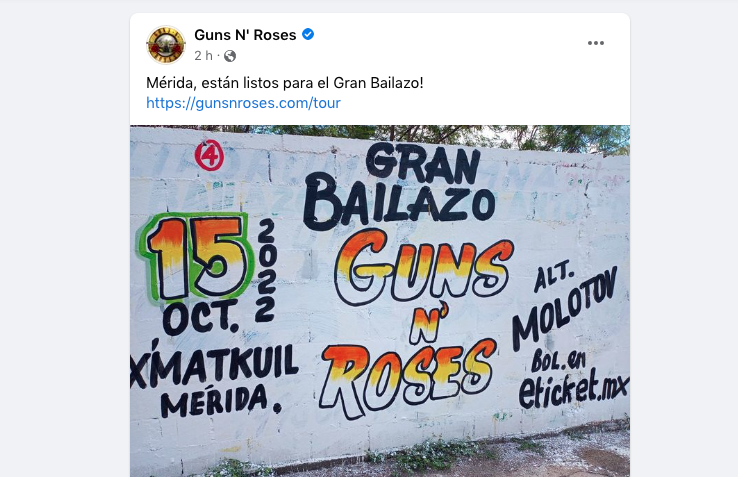 Through their official social networks, Guns N’ Roses has decided to promote its upcoming tour of Mexico using the popular marketing Mexican.

As a result of the global health emergency, the music industry was one of the hardest hit. In Mexico, according to what was announced by the Survey Music Mexico impact COVID-19Between March and June 2020, losses of up to 500 million pesos were recorded.

Under this context, PwC estimates indicate that, In 2021, the music industry (recordings and live shows) in Mexico reached revenues of 814.64 million dollars. And it is that, the shortage of concerts and festivals had an important impact on the people who based their income on this industry, from staff members, musicians, dancers, etc.

From this perspective, and taking into account that the lethality of Covid-19 has reduced considerably, 2022 is considered as that year of recovery for the industry, and Mexico is one of the most active countries with the amount of concerts that, since last March, began to be held in various parts of the country.

Read:  Time is a great master

A recent Live Nation report reveals that, until March of this year, more than 70 million concert tickets had been solda figure that is equivalent to 36 percent more compared to the same period in 2019.

Undoubtedly, for fans of live music it was necessary to return to the old practices of concerts and festivals, which is why the Corona Capital, to mention one example, sold out a few hours after the tickets went on sale.

Within the extensive list of concerts that will arrive in Mexico for this second part of 2022, one of the most advertised and, perhaps, expected, is Guns N’ Rosesa group that will offer several shows distributed between Mexico City, Monterrey, Guadalajara and Mérida.

Of course, advertising plays an important role for these shows to achieve the expected effect (fill capacity), and in Mexico there is a very peculiar form of advertising.

Through their social networks, Guns N’ Roses shared part of the promotion that, in the Mexican style, is being carried out for the mini-tour that the group will offer in October. Basically, the band is inviting fans to the “great dance” of the American group in which the Mexican band Molotov will also be.

At present, social networks have become one of the advertising strategies and marketing more effective, so much so that strategies such as outdoor advertising have been losing use.

Information of Dentsu Aegis Network announces that the percentage of spending on outdoor advertising in Mexico, in 2020, was 5.5 percent.

In the case of musical groups, social networks are usually more effective when it comes to making an announcement, be it a new song, a new album, a tour or any other creative idea.