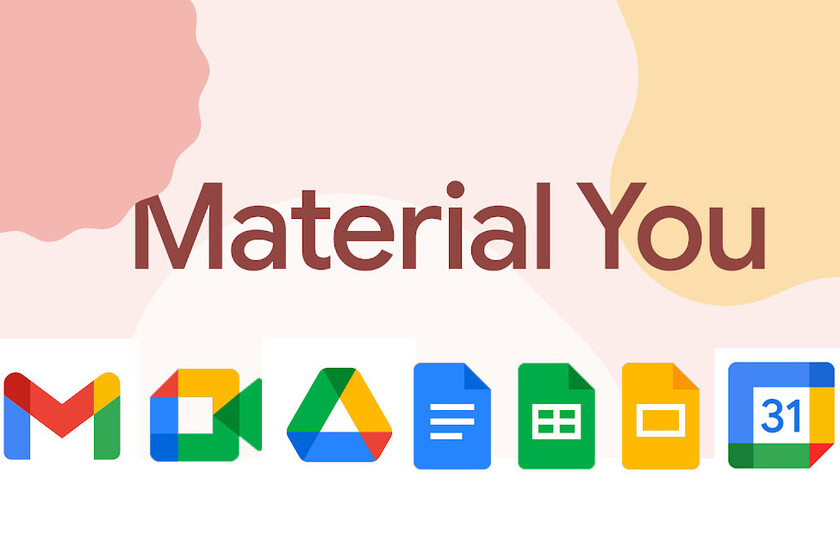 In a few weeks Google will officially launch Android 12, the next major update to its operating system whose most important novelty is Material You, its biggest redesign to date. And now that the Android interface is redesigned, now it is the turn of the applications.

In the fifth and last beta of Android 12 we have seen how the Clock and Calculator applications were redesigned with Material You, thus joining Gboard and Contacts. Well, now Google has presented the redesign of Gmail, Meet, Calendar, Drive, Docs, Sheets and Slides, showing the changes we will see and the date of the update.

Applications redesigned with Material You will arrive to all users. The only difference is that from Android 12 users will be able to do match the colors of the apps with your wallpaper. Next we will see what the Material You interface of these Google applications will be like:

The most visible changes of Gmail with Material You is that the search bar It has a flat blue background color, without the shadow effect, and with more rounded corners. At lower menu We can see how the icon of the activated tab shows a curved rectangle in the background. And the Compose button it goes from having a background color to having less pronounced curves. By default the color will be blue but in Android 12 with the dynamic theme the color will depend on our background. Gmail with Material You is coming already to users with the version 2021.08.24 or later.

On Google Meet with Material You the change is limited to rounding the corners of the buttons and showing the event icons in black with a blue background or whatever corresponds to the wallpaper. These changes will come to version 2021.09.19 of Meet from September 19.

With Google Drive we find the same changes as in Gmail: a search bar with a more rounded background color, a new icon to add elements and the new effect in the lower navigation menu. These changes will arrive with version 2.21.330 starting today September 9.

Since September 1, Google is also activating in a phased way the redesign for the applications of Documents, Spreadsheets and Presentations. Here the changes are more the same as in Google Drive in addition to ** redesigning its icons and editing menus **.

Finally, from September 20, Google will begin updating your application from Calendar to Material You, whose changes are the new background color for its action menu, which until now was white, and the redesigned button to create a new event or reminder.

Via | Google
In Engadget Android | Android 12 beta, we have tested it: the first brushstrokes of a big change

Benefits of doing burpees every day