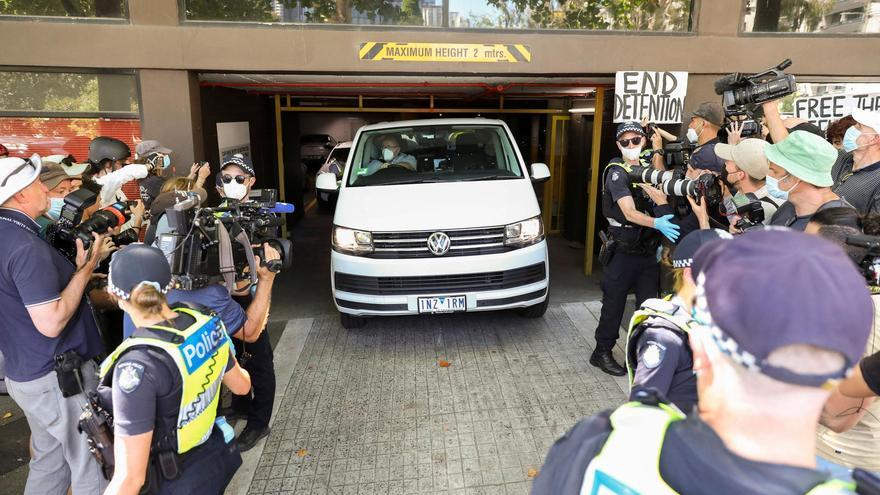 The Serbian tennis player’s lawyers, Novak Djokovic, alleged this Monday during the hearing on his deportation that the number one in the world followed all the migratory steps that it believed necessary to enter Australia with a medical exemption for not being vaccinated.

The Melbourne Federal Circuit Court is studying since this morning the tennis player’s appeal to the decision of the Australian authorities to revoke his visa for not being vaccinated against covid-19 and for allegedly not having correctly justified the reasons for obtaining a permit that would allow him to enter the country without quarantine.

At today’s hearing, Djokovic’s lawyer, Nicholas Wood, explained that the Serbian athlete “He did absolutely everything he thought was necessary to enter Australia”, and insisted that while the regulations “do not require travelers to provide evidence on these matters,” his client did.

The defense of Djokovic, who arrived in Australia on Wednesday night and was held shortly after at a hotel in Melbourne, ensures that he received an evaluation from the Australian Department of the Interior via email in which it was said that he met the requirements to enter the country.

However, the Canberra Executive argues that it was not a guarantee of entry for Djokovic.

“What else could this man have done?”, Judge Kelly, was asked about the steps he followed to justify that he could not be vaccinated against covid-19, including the presentation of medical exemptions signed by the experts.

During their speech of about two hours, the tennis player’s lawyers recounted in detail the eight hours that Djokovic spent at Melbourne airport after his arrival from Dubai, in which he was practically incommunicado.

Officials made the world’s number one turn off his phone from midnight to around 7:42 a.m. local time, when the decision was made to cancel his visa, detailed the tennis player’s legal team, to which He had trouble talking to his attorneys or the organizers of the Australian Open.

For his part, the lawyer Christopher Tran, who represents the Ministry of the Interior, the entity that deals with the immigration and border control portfolio, He justified the cancellation of Djokovic’s visa at the hearing.

Referring to the concept of risk to the public, Tran noted at today’s hearing that the definition was changed a few years ago so that “It is not necessary that one be a risk, but can present a risk”, as quoted by the local network ABC.

Djokovic – known for opposing mandatory immunization against covid-19, – wants to clarify his situation so that it is considered in the Australia tennis draw, to be held between January 17 and 30 and what if winning would represent his twenty-first Grand Slam and his 10th title in that tournament.