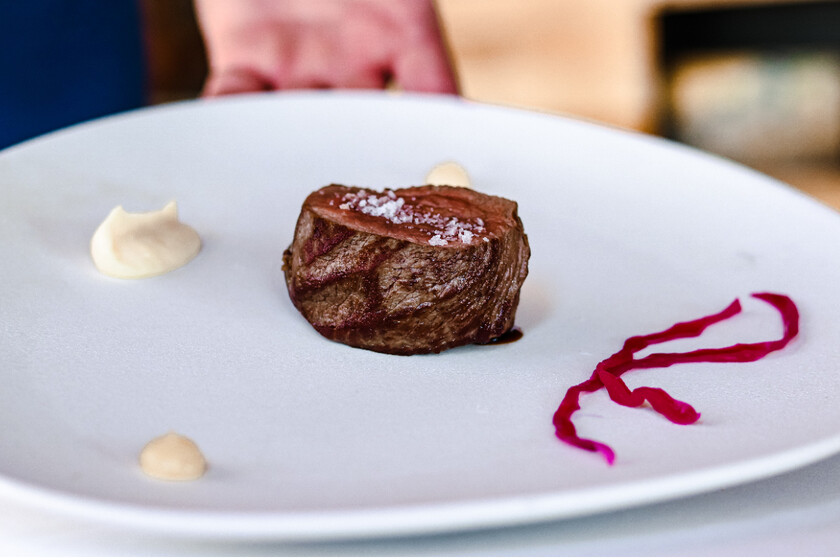 Mount, olive tree and Sierra Morena as a backdrop are the wickers on which one of the Cinderellas from the Michelin Gala 2022 is woven. Out of focus, almost unexpected, oblivious to the noises of the capital and the flashes of Michelin stars in hotels and large cities, Ciudad Real shone with a name that did not sneak into the pools.

Coto de Quevedo … Halfway between the hunting and the literary, which are well worth exemplifying the ‘hunt’ for the star that has given him the chef José Antonio Medina to the French publication, dazzled by the finesse and care with which this young chef has put Torre de Juan Abad, a town of barely 1,000 inhabitants, on the map of the finery.

With honesty as a flag and with hard work — a lot — and with mortgages — a lot too—, José Antonio turns green the laurels of an elegant cuisine of La Mancha, faithful to tradition and to the residue that the home fire has left in it.

It is not a set phrase, neither that of the well nor that of the landlord. The sediment comes from what is sucked and lived in the family kitchen, that of the Hermanos Medina restaurant and hostel (Puebla del Príncipe, Ciudad Real), where Francisca, José Antonio’s mother, still runs the food house where the now star chef took his first steps.

The landlord, as we say, neither is it a filler or an idiom; is a reality. From the moment you walk through the Coto de Quevedo gate until you eat in it —or stay — you know that it will be your home. For a few hours, for a few days, or until you want to leave it.

A Castilla-La Mancha that does not bluff

An example of hospitality that you have known raise the austerity of Castilian-La Mancha cuisine to standards that show that we are not talking about coincidences. The prizes follow one another, the critics are enthusiastic and the customer, loyal, appreciates it.

The two stars of Fran Martínez in Maralba (Almansa), the biastellarity of Iván Cerdeño, the Cañitas Maite boom, the steps of Teresa Gutiérrez in Azafrán and other prophets in his land – also with the approval of Michelin – like Jesús Segura in the Cuenca Trivio o Samuel Moreno in Molino de Alcuneza (near Sigüenza) show that Castilla-La Mancha is not bluffing.

A value that, in this case, José Antonio connects from the product, from the proximity and from a house where the rings do not fall off for being a man almost an orchestra. Weddings and events take place in Coto de Quevedo -when the covid-19 allowed it-, hunting menus for hunters who usually come to the partridge through these lands and, of course, to their tasting.

Honestly, and several weeks before the award, José Antonio received us without realizing that Michelin was peeking out the door. “The restaurant and the hotel are not mine; at the moment they are from the bank“, he was sincere after the meal.

Medina, sparing in words and sincere in emotions, is not a Don Quixote who crashes into the mills. Nor is he a daredevil, but a chef aware of where he is and what he is doing. A double conscience at the table, in the kitchen and in the treatment.

“This is not a big city gastronomic where we can live only by giving tasting menus. Nor do we allow ourselves to choose the public, and neither do we want it. We have always been a very humble place that we have tried to do the best possible. We are excited the awards, but more excited that people repeat and that it is full“, he commented over the table.

That does not mean that your tasting is well worth it as an indispensable stop in this small hill on the outskirts of town, from which the horizon of Sierra Morena marks the limit between Castilla-La Mancha and Andalusia.

“We make a kitchen of the land, of the local and of highly recognizable products and flavors“, assures the chef. It is not a way of speaking because their menus – tremendously affordable – Estate Y Memories and Memory attest to this.

The self-taught chef with the mother’s baton

Coto de Quevedo will be 12 years old in 2022 and, in between, he has already eaten two crises, each one more raw. Although it is a word that José Antonio Medina does not shy away from and that has served to forge the character of this chef who has been cooked over low heat.

Read:  How to quickly dry bread to make French toast if you forgot to buy it yesterday (and why it's better to use old bread)

First in the family restaurant, a food house from which it continues to be inspired, and then with his flirtations with haute cuisine. “Coto de Quevedo is still a food house; what do we place differently? Yes; what sauces are finer? Well, too,” he exemplifies.

From there, the verse keeps the same letter with which Castilla-La Mancha has become great and where this zone of hunting power is claimed. “We are partridges, deer and wild boar, and a subsistence kitchen that has more potential than is sometimes believed,” he explains.

With the use by flag, It is exciting to see that the flavors that have been inherited are transmitted with elegance without losing potency. If we say that José Antonio Medina is down to earth, it is not just a metaphor.

Environment in the casserole

Finding the best time of year to visit Coto de Quevedo is difficult because they all have their particular charm. In my opinion, perhaps autumn is the one that does the most justice, a time when hunting season opens and La Mancha vibrates between rayones, corcinos and rabbits.

Of that fidelity, José Antonio boasts of possibilities with the same ingredients. The partridge, for example, is served in a minitosta of its pate or refreshed in a salad of its marinade that emulsifies powerfully between granny smith apple and foie shavings.

A conception of the local that also draws on certain French airs and the possibilities that hunting offers. The deer, in turn, is capable of opening the menu with a fine sandwich of its chorizo ​​or closing the salty with a perfectly roasted loin.

Under that baton of the local, denying the sheep his cattle ranch pontificate from La Mancha would be a mistake. Logically, of local breed, lamb and sheep multiply. It can be used for a butter -which is made at Finca Alcudia-, which is also used to make a brioche with sardines, but also to close the menu with a sheep’s milk curd or to polish the lamb loin to which, as a nod , marina in a very elegant oyster sauce.

Recognizable, sincere, real and without hesitation in the presentations, strong point of a kitchen with measure and without fanfare, José Antonio lets the cured and fresh also take on importance. This is the case of the pazo azulón, whose breasts he cares for himself, or the very fine roe carpaccio.

In that section outside the fire, the steak tartare that is finished on the table is also worth the trip by itself. Among the inheritances, a donut stuffed with manchegas porridge —Of which rations would be requested if possible— or of the classic iron flower, here in salty, which is filled with a widowed ratatouille.

Honesty, a constantly growing wine list and with La Mancha as a starting point, and views that ask for table-top seating and accommodation, they are the virtues of a house —we insist on the concept of house— that makes Coto de Quevedo a small oasis where you can feel again.

The finish is a cod taco with its tripe, a fresh dessert based on lemon mousse and sheep’s milk curd, served as a panacotta, on which green and white figs are lined. © Jose María Fernández Yunquera.

We are convinced that, if Francisco de Quevedo lived in our days **, he would have no problem in leaving the court of Madrid ** again and settling in Torre de Juan Abad. Especially if one can eat daily in Coto de Quevedo.

What to ask for: Although there is a letter and tasting menus, the best thing to do is go to the long Memoria y Recuerdo tasting, which is very easy and allows you to get to know Coto de Quevedo’s offer in depth. If we go a la carte, the steak tartare, the ratatouille or the peculiar tiznao cod are essential.