climate activism has decided to focus its ire on museums 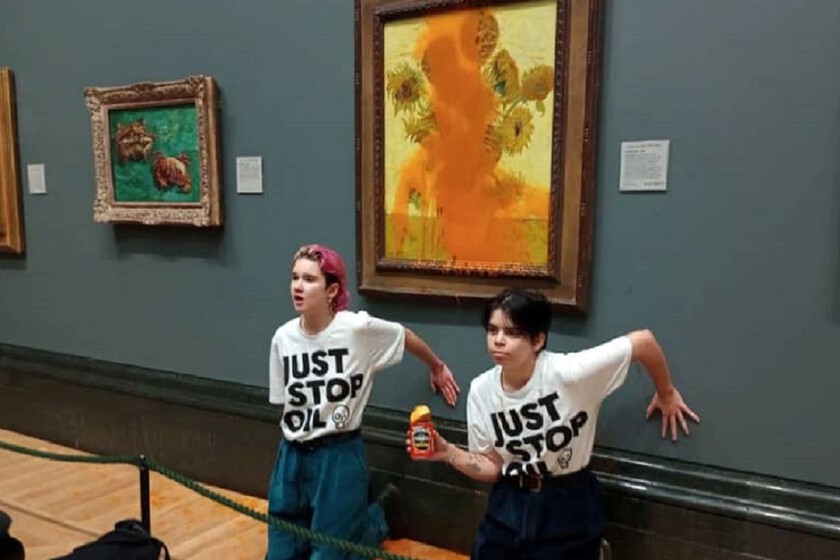 Vandalism in museums is on the rise. In recent months, several attacks against recognized masterpieces by important artists have been planned and carried out by environmental organizations as a protest. Today the last victim of this type of practice has been settled in the National Gallery in London. Let’s see what happened and what counts the growing trend behind of these types of claims.

In the video, someone can be heard yelling “Oh my God” as the soup hits the tarp, and another person yelling “Security?” The gallery indicated that the painting was covered by glass and therefore not damaged.. It was one of seven Sunflowers works that Van Gogh created in 1888 and 1889, five of which are on display in galleries and museums around the world. The painting had an estimated value of 84.2 million euros and the event has resulted in two people being arrested.

activists with @JustStop_Oil have thrown tomato soup on Van Gogh’s Sunflowers at the national Gallery and glued themselves to the wall. pic.twitter.com/M8YP1LPTOU

If we pay attention to the words spoken by the activists in the video we hear the following: “What is worth more? Art or life? Is it worth more than food? Is it worth more than justice? Are you more concerned about protecting a painting or protecting our planet and people? They also mentioned the cost of living and “millions of cold and hungry families” who “can’t even afford to heat a can of soup.”

The organization Just Stop Oil later released a statement explaining that the aim was to demand that the UK government stop all new oil and gas projects. On Twitter they noted: “Thanks to skyrocketing petrol prices, millions of British families won’t be able to afford to heat up a can of soup this winter.”


The action comes three months after members of the same group pasted paper on John Constable’s hay wagon in the same gallery. In June, two different Just Stop Oil activists latched onto another van Gogh painting at London’s Courtauld Gallery. They argued that they focused on peach trees in bloom by Van Gogh to highlight the impact of climate change when Provence, the French region that appears in the painting, was burning along with much of southern Europe due to the unprecedented heat wave and drought that we experienced in summer.

Read:  Rock presents campaign for Alpura and this was the creative focus

In Italy, two activists from the environmental group Ultima Generazione did the same thing to the glass that protects the painting Spring by Sandro Botticelli in the Uffizi Gallery in Florence. The work escaped unscathed and the Corriere della Sera newspaper quoted activists as saying: “Today, is it possible to see a beautiful spring like this?” environmental reasons are usually behind these non-isolated events.

If we take into account the notorious event in which an attempt was made to vandalize the Mona Lisa a few months ago, the question arises whether these acts actually have a convincing logic behind them. In this case, Leonardo Da Vinci’s work came under attack when a costumed man in a wig and lipstick smeared cake on the painting after jumping the railings in front of it and attempting to break the bulletproof glass that protected it. As the police dragged the man away, he shouted his justification in French: “Think of the Earth! There are people who are destroying the Earth! Think about it. Artists tell you: think of the Earth. That’s why I did this.”

In reality, according to experts, there are very few, if any, causes that justify the desecration of an important historical and artistic object. However, even if the attacker were justified in his actions, the Mona Lisa It was the wrong target. According to the Polish academic Nina Witoszek, its creator, Leonardo da Vinci, had a great appreciation for the environment, and his written and painted works brought that love of nature into the artistic mainstream. “He was a man who has surely been overlooked by our [organizaciones no gubernamentales] modern environmentalists as its potential sponsor.