CEO of marketing company cries on LinkedIn after firing employees 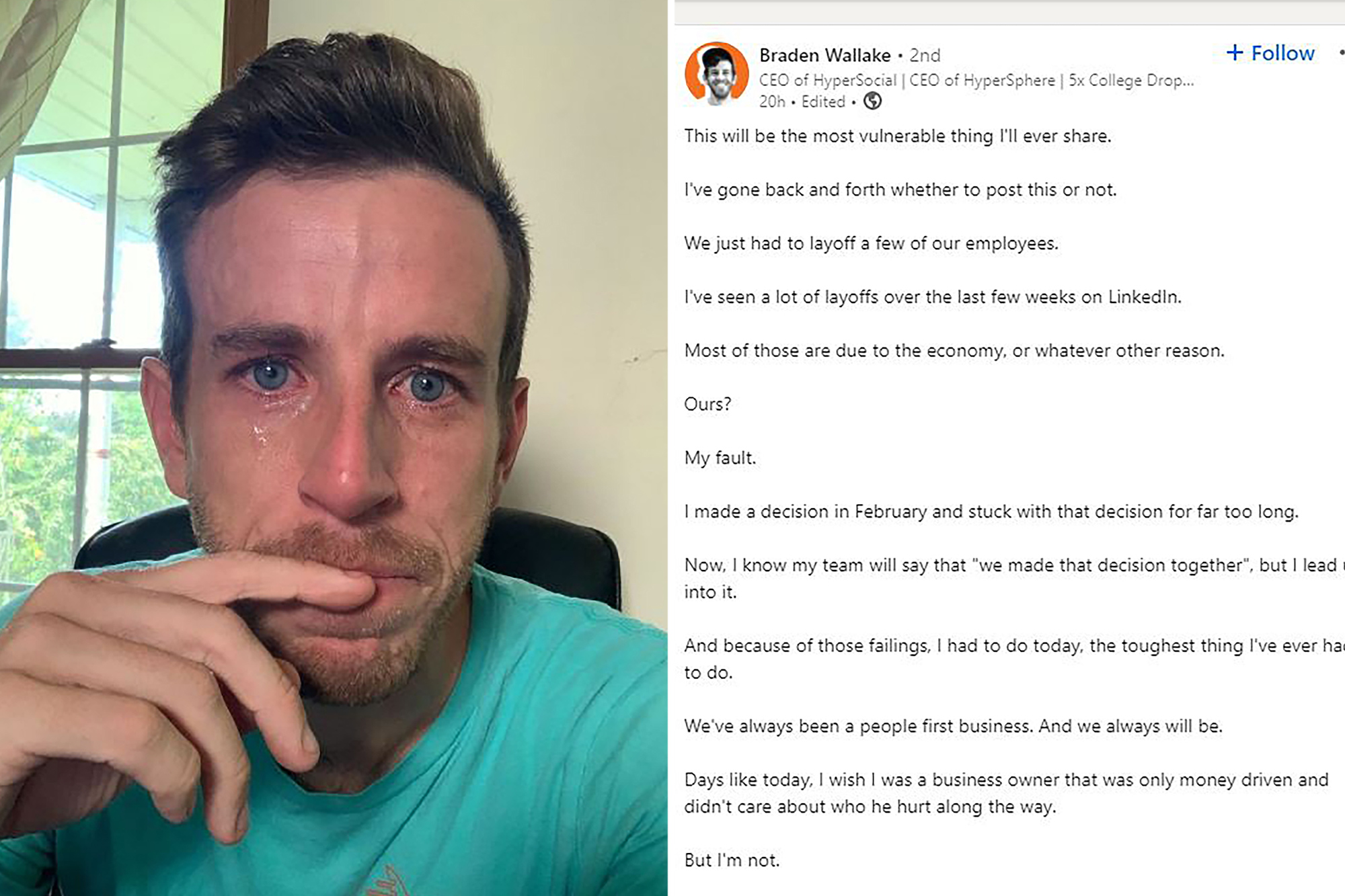 The internet has become a safe space for many people in the world, where they expose their day to day and even their work actions. This is the case of the CEO of the services company marketingColumbus, Ohio-based HyperSocial, who took to LinkedIn to announce a list of layoffs but drew attention for appearing in tears.

The strong economic crisis that the world is going through, especially the United States, has been responsible for many companies reducing their staff. According to the latest data from the Bureau of Labor Statistics (BLS), the number of applications for unemployment benefits in the United States fell to 231 thousand, 2 thousand less than the previous week, with which the unemployment rate remains at 3.6 percent.

Given this, the layoffs and the freezing of staff in the United States increase with the fear of a recession, where in the month of May, more than 15,000 layoffs were announced in technology companies, according to The Washington Post.

The strong criticism reached the executive director of a company of marketing after making layoffs online, via a post on LinkedIn.

Braden Wallake, CEO of the services company marketing HyperSocial, went to LinkedIn to announce the layoffs of several company employees, but draws attention for appearing in a photograph crying.

“This will be the most vulnerable thing I will ever share,” Wallake wrote as he fired his employees.

“I have gone back and forth whether to post this or not. We just had to lay off some of our employees.” stands out, so it is not clear how many employees were fired by the company.

In the post on the digital employment platform, Wallake also wrote that the layoffs were “my fault” due to a decision he made in February, so he admitted that “He stuck with that decision for too long.”

“Now, I know my team will say ‘we made that decision together,’ but I led us to that. And because of those failures, I had to do today, the hardest thing I’ve ever had to do.” He says.

According to HyperSocial’s LinkedIn profile, the company, founded in 2019, has up to 50 employees. In that sense, the manager mentioned that HyperSocial “We have always been a people-first business. And we always will be.”

“On days like today, I wish I owned a business that only cared about money and didn’t care who they hurt along the way. But not me. I’m sure there are hundreds and thousands of people like me.” he added.

The manager did not explain the reason for the dismissal of his employees, so the publication generated almost 28,500 reactions, more than 4,770 comments and almost 400 shares, where most of the reactions were negative.

“Why not cut your salary or take one until the company is back where you need it to be?” wrote a user on LinkedIn.

Meanwhile, another user on the platform posted a screenshot of an Instagram post by Wallake in June announcing that he had adopted a sea otter.. “Maybe it’s not a great idea to adopt a sea lion at the start of a recession?” reads in the message.

“Sorry, your post gives me bad feelings. It’s more about YOUR feelings and not the feelings of the people you had to fire. That sounds a bit like self-pity,” says another netizen.

Also, as well as criticism, other users on LinkedIn defended Wallake.

“What about this post where he admits his faults, failures and expresses his anguish at the damage he has caused that made you feel the need to pile on?” one comment read.

Faced with this first publication, Wallake shared another message on LinkedIn on Wednesday defending his decision to publish what he felt. “Hello everyone, yes, I am the CEO who cries. No, my intention was not to do anything for me or to victimize myself. I’m sorry it came out that way.” wrote.

“What I want to do now is try to improve this situation and start a thread for job seekers,” he wrote.

This measure is not the only one that has happened with similar cases in the digital world, as we remember the incident last year in which the CEO of Better.com cruelly announced that he would fire hundreds of workers during a three-minute Zoom call , going viral all over the world.

Many times social networks can be a great tool, but it can also expose a person so much that it can cause these types of problems.

Women on LinkedIn tired of men using the app to flirt

6 ways to avoid silent resignation in your work team