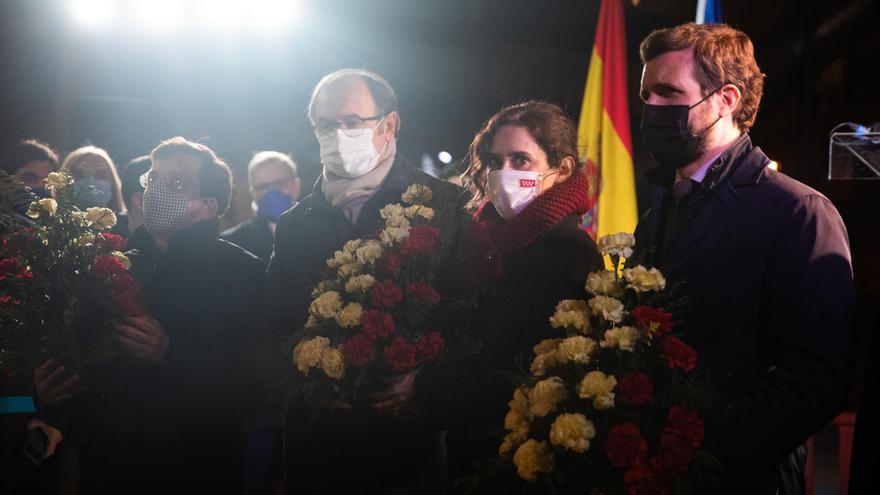 The president of the Popular Party, Pablo Casado, this Monday urged the President of the Government, Pedro Sánchez, to “break any ties with Bildu” whom he has defined as “heirs” of the Batasuna entourage, who “have not yet recognized the systematic murder of ETA”.

This is how the leader of the PP has spoken during the floral offering for the XXVII anniversary of the murder of Gregorio Ordóñez at the hands of the terrorist group ETA which, one more year, has been held in the garden named after the former ‘popular’ councilor in Madrid, together with supporters of the PP and people close to the former deputy mayor of the San Sebastián City Council.

In this sense, Casado has reiterated three requests that “have been asking for too long”. On the one hand, that the Government of Pedro Sánchez break “any negotiation” with Bildu and, on the other, that the prisoners of ETA that they have not repented or collaborated in clarifying unpunished crimes “they are not given a single benefit”.

Finally, he has insisted that terrorism be conceived in Spanish legislation as “a crime against humanity” and “that does not prescribe, because we are talking about a genocide“.

Likewise, he has referred to the victims of ETA reminding them that the PP is going to “continue to stand up” for them, at the same time that he has indicated that “the sacrifice of loved ones cannot be allowed to be obscured”. In addition, Casado has mentioned that when the victims continue to ask for memory, dignity, justice and truth “it means that this defeat has not yet been made effective.”

Read:  This Google AI can create images with a short description

Casado explained that the PP’s commitment is to restore unity, “as opposed to others who break it to retain power“. Finally, he has claimed to preserve the memory of those who fought for freedom.

Ordóñez, “one of the giants of democracy”

For his part, Ayuso has denounced the “infamy” of the Sánchez government, whom he has accused of want to erase the names of the victims. Regarding Gregorio Ordóñez, the Madrid president has valued his role in politics since “he set the bar very high” and, therefore, as he has said, he has been “one of the giants of democracy”.

The mayor of Madrid has also made reference to a “political and cultural battle” because, as he clarified, the ETA members were not “romantic heroes but murderers”, while recalling that the “judicial battle” was won but there is still a need to “preserve the memory and justice of the victims”.

In this sense, Almeida clarified that it had never been such a complicated “battle” because “those who have inherited ETA are in the government”. However, he has insisted that the PP will not give up.

At the end of the meeting, the participants proceeded to place flower centers in memory of Gregorio Ordóñez.

Thor: Love and Thunder – Christian Bale as Gorr the God Butcher is everything we’ve been waiting for

eBay enters the NFT market with its first collection