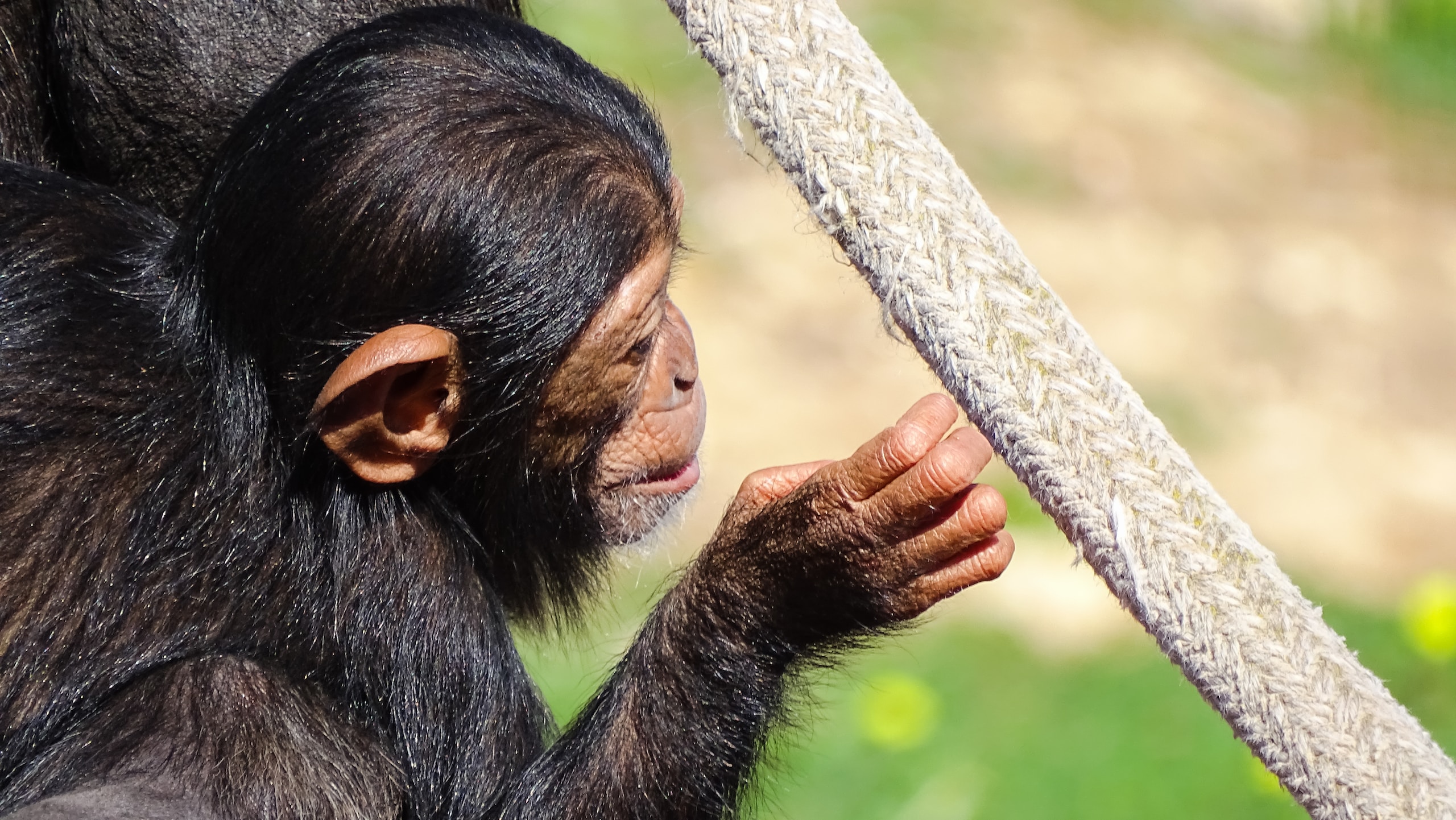 For the first time, scientists have managed to see a albino chimpanzee in the wild. It happened in 2018, when they began monitoring a totally white baby, accompanied by his mother, in Uganda.

But alas, the joy of being able to witness something so unusual was soon clouded, when his own packmates attacked and brutally killed the little boy.

Both the discovery, the death and the subsequent inspection of the corpse by the rest of the chimpanzees has been described in Journal of Primatology by a team of researchers from the University of Zurich and the Budongo Conservation Camp. It is a terribly tragic story, but also loaded with very unusual behaviors, which have attracted the attention of scientists.

Index hide
1 Why is it so difficult to see an albino chimpanzee in the wild?
2 A tragic outcome
3 Totally albino
3.1 Also in Hypertextual

Why is it so difficult to see an albino chimpanzee in the wild?

Albinism is a genetic disorder consisting of a series of mutations by which cells synthesize little or no melanin. This is the pigment that gives color to our hair and our skin. But also in the eyes. In fact, as explained from the Mayo Clinic, is also involved in the development of the optic nerves. Therefore, people affected by something known as oculocutaneous albinismor, in addition to having red eyes, they cannot see well either.

But it does not only affect human beings. It has also been documented in all kinds of animals, from killer whales to pandas. And many primates. In Spain the case of Snowflake, an albino gorilla that lived in the Barcelona zoo from 1966, when he was 2 years old, until his death in 2003. Thus, he lived 39 years, normal for a gorilla. But, perhaps, if he had not lived in captivity his life would have been much shorter.

And it is that, in freedom, albino animals are easy prey for predators, since they cannot be camouflaged like others. Also, their own packmates may consider them a threat, seeing them as different. And that is precisely what happened to the albino chimpanzee in this story.

We warn that the description of the death of the ape can hurt sensitivities.

This albino chimpanzee was first seen in July 2018, on the Budongo Forest Reserve, on Uganda. In this area lives a community of 75 chimpanzees, totally used to the presence of humans. In fact, since 1990, they have been continuously monitored by researchers, who have observed their behaviors every day, from 7 a.m. to 4:30 p.m.

Returning to the baby, the scientists had followed the pregnancy of its mother, called UP, so they calculated that it must have between 14 and 19 days. Furthermore, this could be confirmed by its size.

Although there may have been other animals like him, it was the first time that one like this had been seen in the wild. So, surprised and excited, they followed mother and son during the following days. But soon they saw that something was wrong. The rest of the herd displayed suspicious behaviors towards the baby and its mother.

First they detected some specimens emitting sounds characteristic of these primates when they see threatening animals, like snakes. Afterward, some of them beat UP and the little albino baby. It is true that not all did. In fact, the only adult male in the group took the mother by the hand, in a conciliatory way. But it was not enough, the incessant threats from the rest forced her to hurry up a tree.

Tragedy was chewed up. So it was. Finally, a few days later, the reserve scientists heard what sounded like the cry of a baby ape, accompanied by other, much more aggressive screams. When they reached the area, they saw the alpha male emerging from a thicket carrying the albino chimpanzee, which was missing an arm. At least six more chimpanzees pounced on him and began biting his limbs and ears. The little boy was still alive, so he wouldn’t stop screaming. He only stopped moving and screeching when he was finally taken over by an adult female, who began biting his head repeatedly.

Once the albino chimp was dead, the rest of the group approached observe it and sniff it curiously. In their study, the researchers report such unusual behaviors as stroking it or inserting a finger into its anus.

Once the corpse was abandoned, the study authors collected it and took it to the laboratory. There, they were able to verify that the albino chimpanzee had a total absence of melanin, both on the hair and on the skin and eyes.

That made him an exceptional animal. He is not the only primate with albinism, of course. We have seen the case of Snowflake in Spain. But there is also others, as the female orangutan named Alba. It was found in 2017 in a cage, in Borneo, dehydrated, malnourished and full of parasites.

She was rescued by scientists who dewormed, fed and hydrated her. During her recovery time, she remained in captivity with other orangutans, who eventually accompanied her to a forest island of more than 5 hectares, prepared so that she could live in freedom, but safe from other larger herds that could receive her like the albino chimpanzee from Uganda.

The scientists who rescued her in her day have followed in her footsteps since then and say that she is well. At least his story did have a happy ending.

“Third is not what we wanted, but we will try to get the most out of it”

Lucía Galán recalled her courtship with Diego Maradona and assured: “He had a very good relationship with Doña Tota”

9 GREAT MOVES FOR YOUR WORKOUT