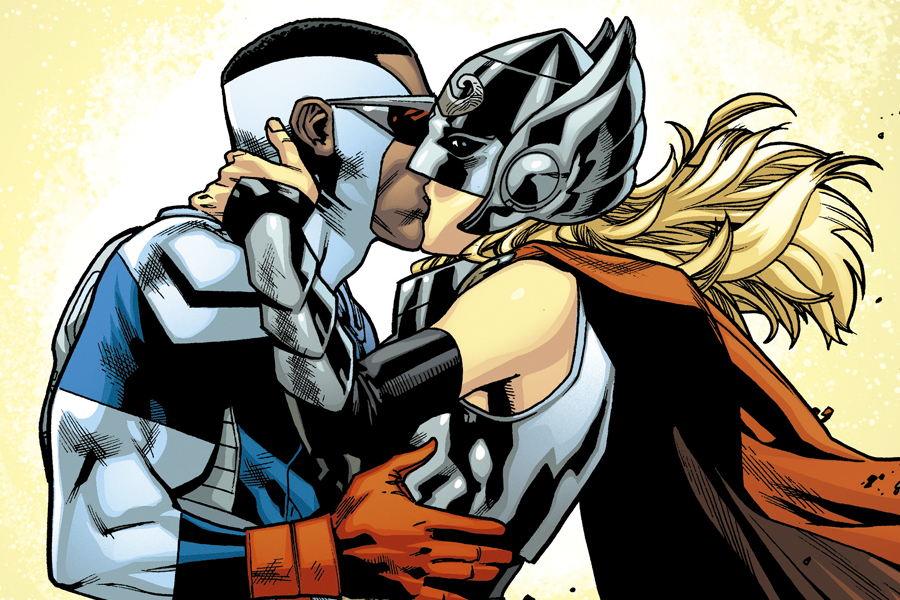 In the most recent volume of Spider-Man we find ourselves before the incredible first kiss of Spider-Man (Miles Morales) and Spider-Woman (Gwen Stacy). The new arachnid couple seems to have a promising future in the multiverse… but for now they have decided to keep their distance, each in their own version of New York. 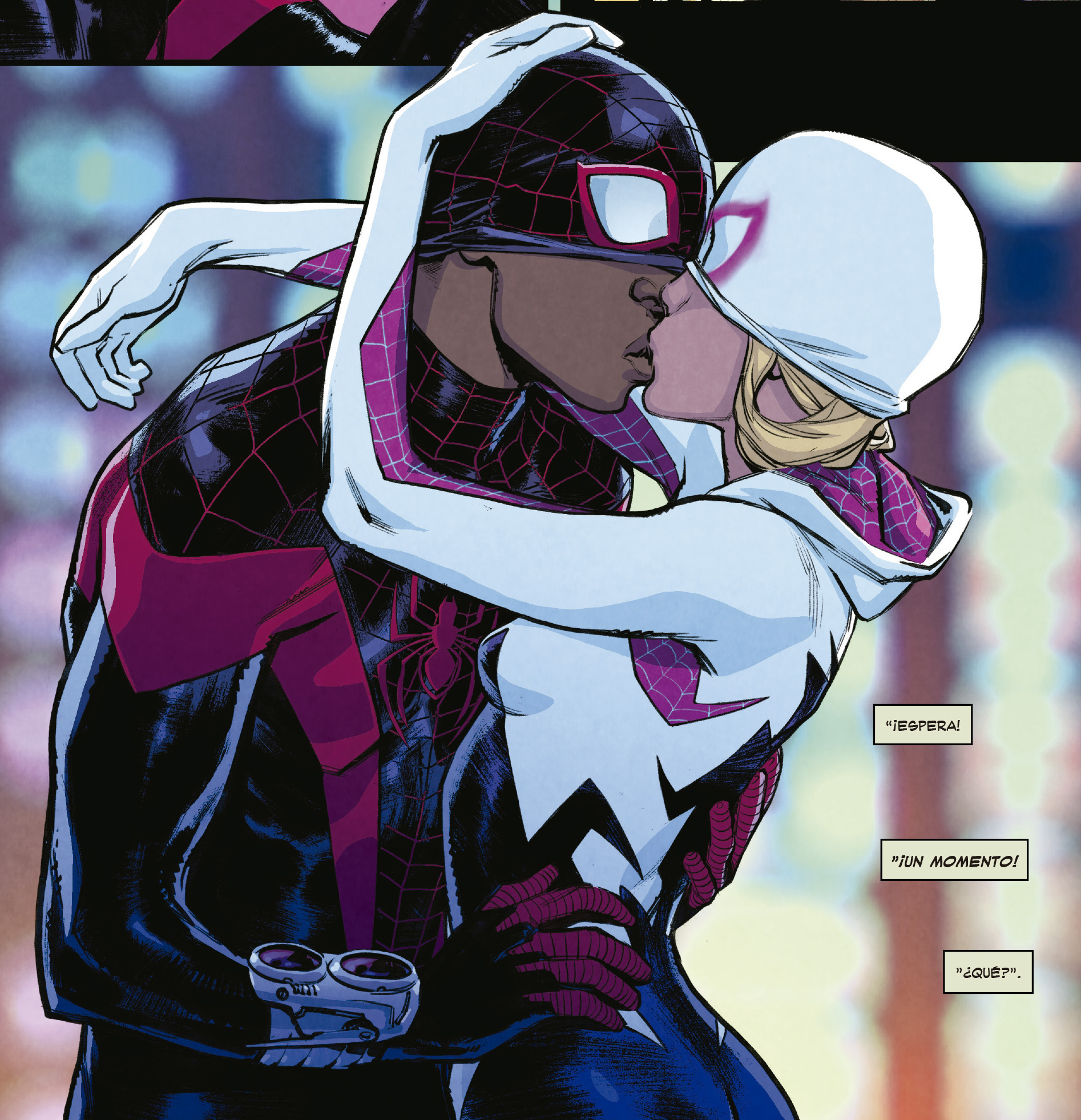 We already talked a little about the kiss between the two characters and what we could define as their first date. What we haven’t told you about is about similar moments in the Marvel universe, where the planet’s most powerful heroes have put aside their camaraderie to succumb to the joys of love.

Get to know our Top 5 Marvelitas kisses… and a bit of what happened next.

Before the events of Avengers Disassembled appeared in the pages of Marvel Comics, Wanda Maximoff and Steve Rogers had a solid romance in the Avengers mansion, with all the moral uprightness of the Captain and the enormous force of the chaos of the Scarlet Witch. . 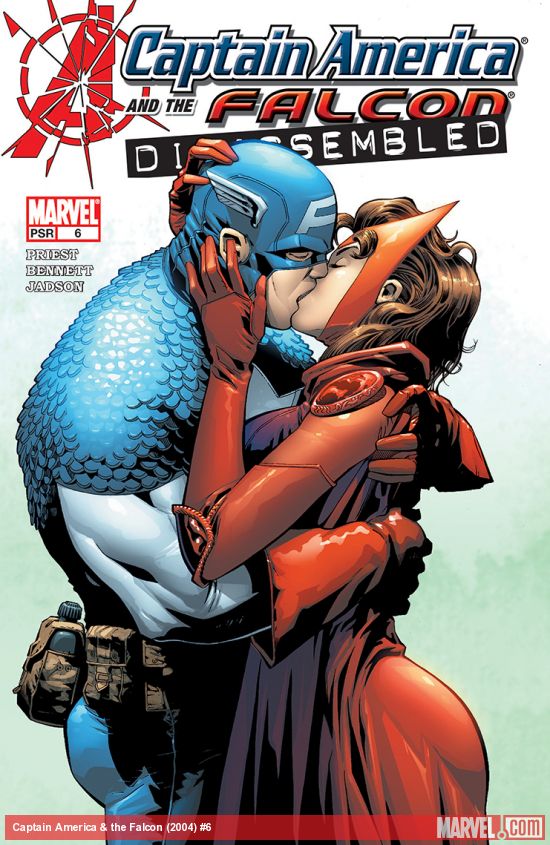 Evidently the kiss on the cover of Captain America and the Falcon #6 made their love affair clear. Unfortunately when everything came to an end Scarlet Witch unleashed her anger against The Avengers… although it was all a plan of Dr. Doom, but the disaster ended in the death of Vision, Scott Lang and Clint Barton.

Within the first story of All-New All-Different Avengers Jane Foster and Sam Wilson continue to deal with their new role as “spare” Avengers, a situation that instead of diminishing the strength of the new Goddess of Thunder, seems to encourage her to fight with all the power of Mjolnir. 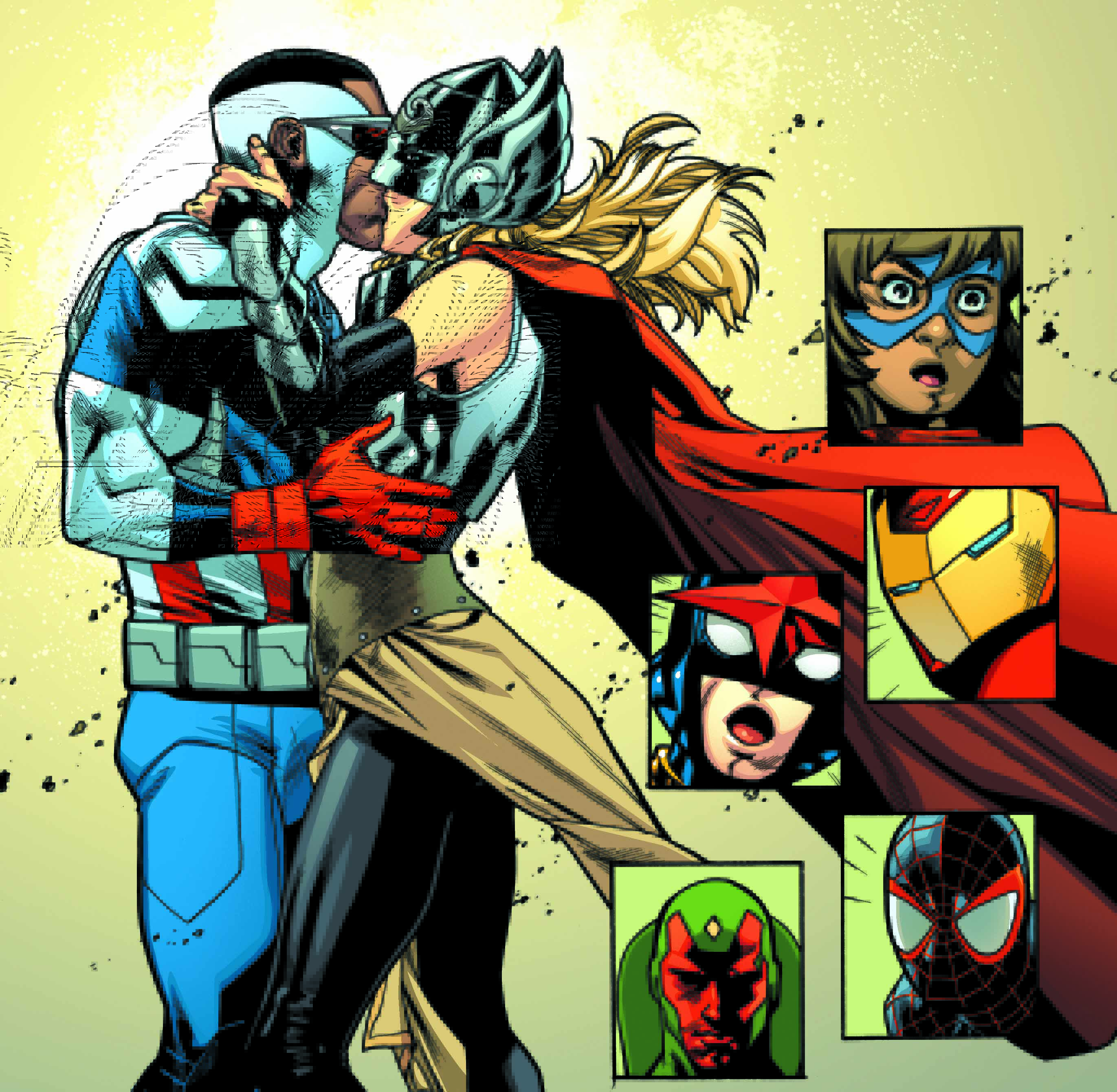 It is so much the impetus of the new Thor that after the battle she gives herself a kiss with Captain America during #4 of All-New All-Different Avengers. The surprise of his companions is evident, especially after hearing Thor’s words when saying goodbye and finding in them the terrible omen of his death.

Precisely the previous point culminates with the powerful Thor in a fight to the death with Mangog to save Asgard. Unfortunately every time Jane Foster transforms into the God of Thunder, cancer advances a little further in the mortal’s body… which leaves her hopeless to see the sunrise once more in Asgard. 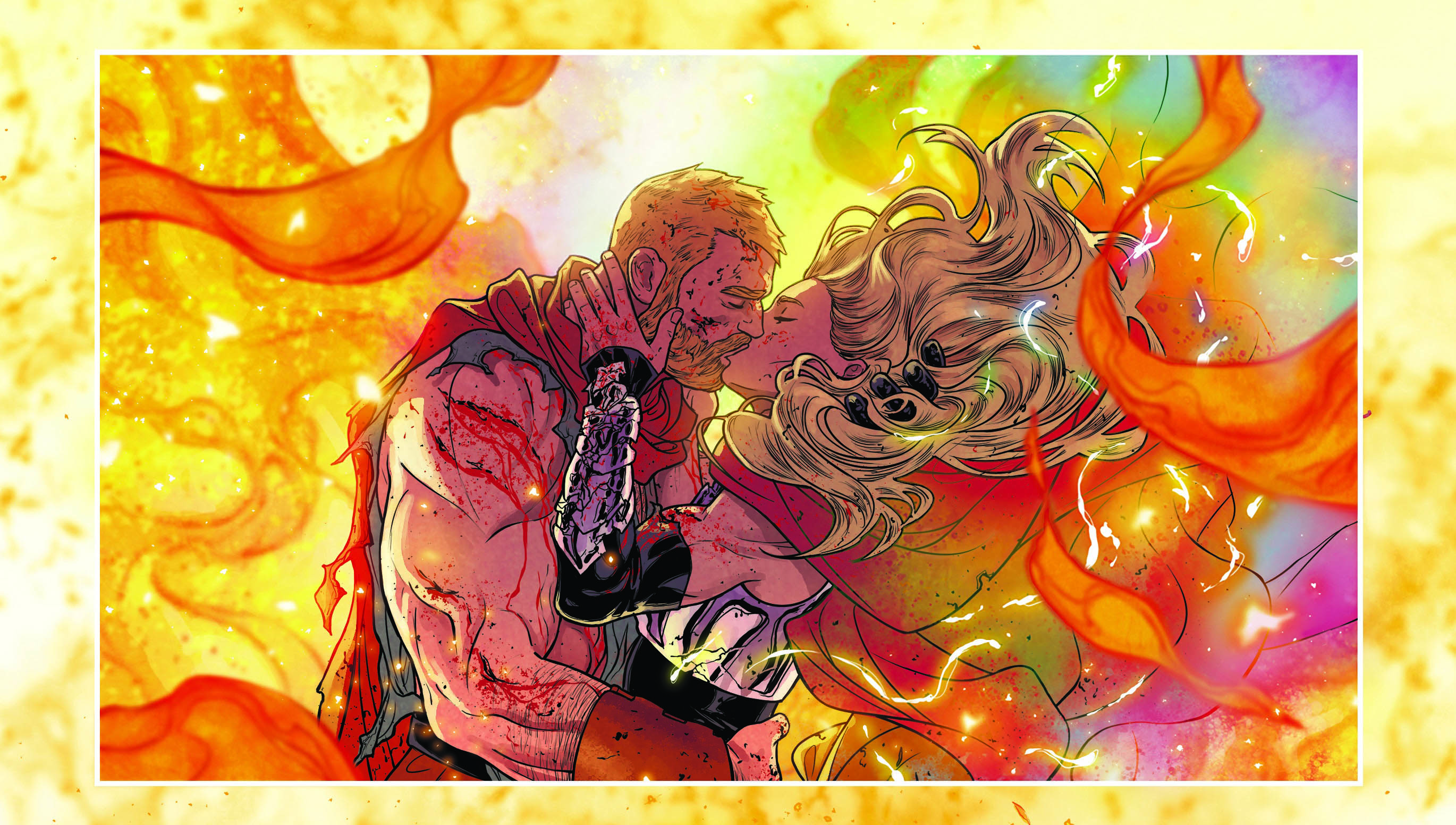 Thor throws the mighty Mjolnir directly into the sun in order to take down Mangog. The victory can only be compared to Odinson’s uncertainty and the sadness on Jane’s face at the last kiss she can give the love of her life. The epic conclusion to #705 of The Mighty Thor.

The wedding between Mr. Fantastic and the Invisible Woman was an event that shook the Marvel universe. Not only because of the importance of having a partner in the publishing house, but because of all the villains and heroes that made an appearance in the story that took place in the third annual Fantastic Four. 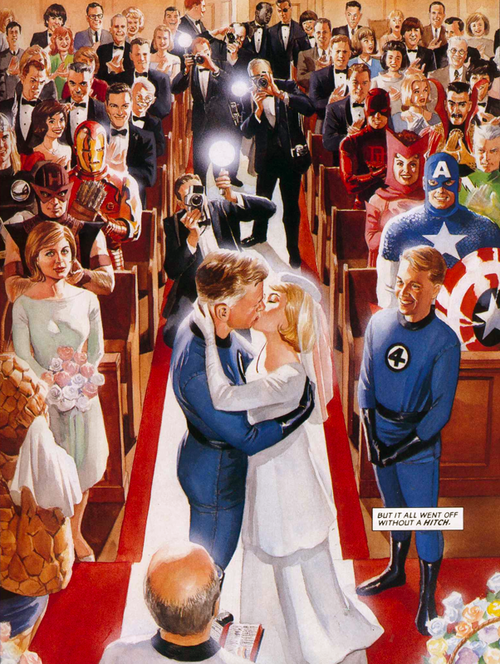 Fortunately for everyone, the wedding took place, despite the enormous attempts of Doctor Doom to prevent the happiness of the fantastic couple. The image that we present to you is the reinterpretation that Alex Ross made for MARVELS # 2, while the original story featured the lines of Jack Kirby . By the way, both the aforementioned Comic King and Stan Lee were left out of the wedding in the original issue.

The Civil War sparked by the Registration Act obstructed one of the happiest moments in Black Panther’s life… his wedding. Ororo Munroe , better known as Storm, would be the woman who would marry the Black Panther. And both characters wanted to gather their best friends at the event. 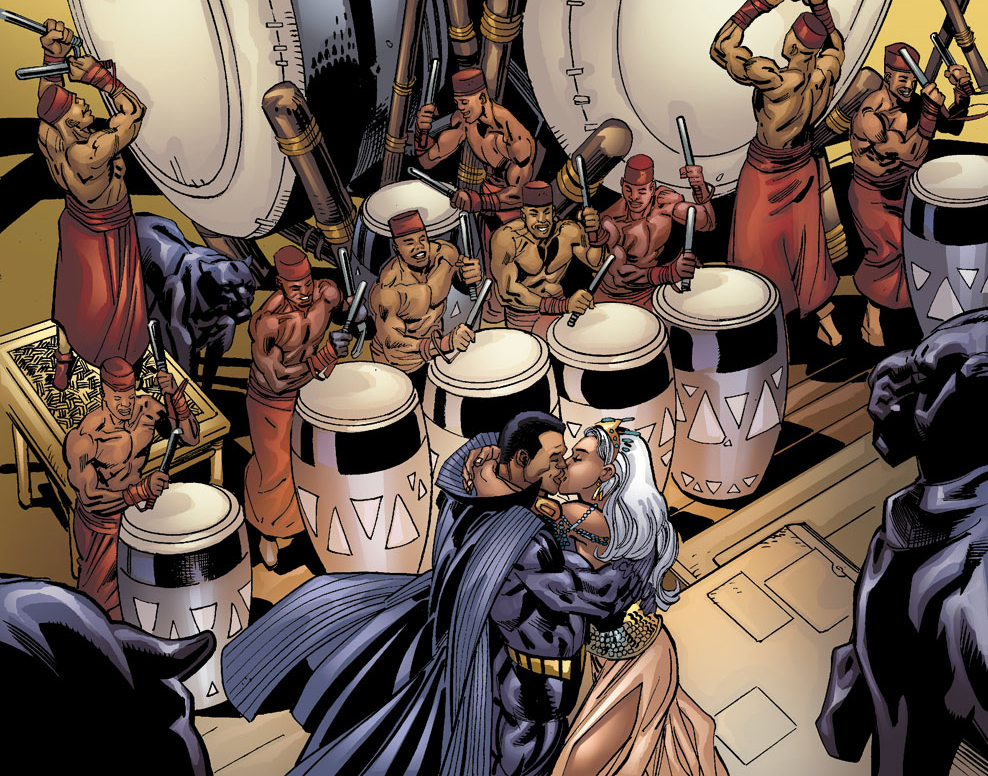 Both Steve Rogers and Tony Stark appeared in Wakanda, where the ceremony was neutral. Unfortunately, the surprise of the leaders of both sides and their hatred of those days outweighed their affection for their avenging friend and both left the Golden City just a few moments after arriving. The wedding took place… and the Civil War ran its course.