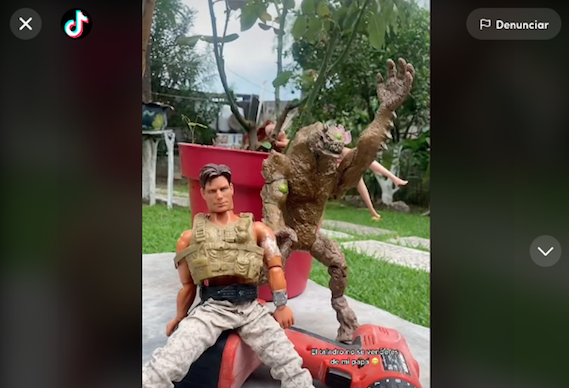 A couple of videos published on social networks are already viral thanks to the creativity of a user who decided to recreate the old Max Steel commercials, but, as he himself indicates, with a lower budget.

If we go back to the year 1999, when the Max Steel action figure was launched, which even managed to captivate an entire generation, since in addition to the toy, a series arrived that increased its popularity.

To this day he is one of the most remembered characters and, without a doubt, one of the most iconic action figures of Mattel, a company that, at the beginning of the year, presented the financial results for 2021, highlighting a 19 percent increase in net sales (18 percent percent in constant currency), reaching 5 thousand 458 million dollars, according to data from the firm.

On the other hand, after, after the pandemic, the sale of toys suffered a significant decline (up to 15 percent in 2020), in April 2021 it reported a growth in sales of 30 percentaccording to what was reported by Ismael Mata, director of Customer Development for the Toys industry of NPD Mexicoin an interview with local media.

At present, Barbie dolls and figures such as those of Max Steel seem to have been lost due to the advanced technology that is now part of the consumption habits of infants; however, there are those who consider them as decorative figures and even collectibles, which is why, on many occasions, their prices are usually very high.

Read:  Five strategies to boost the growth of SMEs

Something that is attracting attention is the inventiveness of a TikTok user who, using his creativity and his Max Steel action figures, decided to recreate the old commercials that appeared on television, although with a big difference: made from his home .

His name in the Chinese social network is @jorgeavillaruz15who has just over 70 thousand followers and a cumulative 2.1 million likes among all his content.

Now, his most recent videos, together, accumulate just over 12 million views. Why? The tiktokerfrom the comfort of your home and Under the name “Low Budget Commercials”, he recreated the old Max Steel commercialsearning, thanks to his creativity, the nostalgia of Internet users.

Maxsteel the hero we all need!! #humor #comedy #foryoupage #maxsteel #commercial #for you #toys #viral

“I remember unlocked. Thanks bro'”; “I remember that we all wanted that toy, but for various reasons there weren’t many and it was difficult to get them”; “What memories! and to think that I still have my Max Steel”; “We need more publicity”; “For me, that was the best Max Steel”; are some of the reactions deposited by users.

Undoubtedly, social networks are that great window where users -people- show their creative skills, which, on many occasions, result in great publicity for brands.

These types of cases are an example of unpaid advertising and a strategy that different brands can take advantage of. by creating stories that manage to move consumers.

We can see a similar case in a group of garbage collectors who are dedicated to parody commercials, movie scenes, soap operas, among others.

TikTok is currently the most popular social network, despite not being the most used; however, we are also talking about a platform that has served as a source of income for content creators.

Book of the day: “Influencer: Building your personal brand…”