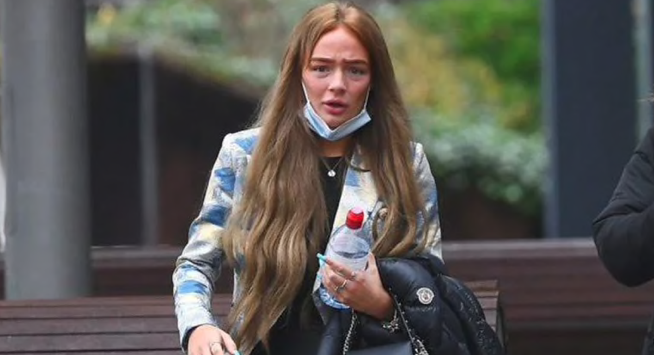 Social networks can be for many people the best tool, but for others it can mean a weapon because of the way they use them. Recently there are many crimes that are recorded in various accounts on these digital platforms, which is why authorities around the world have established standards to condemn this type of crime.

According to data from Statistical in 2022, Social networking sites are estimated to reach 3.96 billion users and these numbers are still expected to grow as mobile usage and mobile social networks gain increasing traction in previously underserved markets.

But that data does not show the true number of fake accounts that are registered daily on digital platforms. The case of a young British woman who was arrested and sentenced to 10 months in prison for creating various accounts on Instagram and managing to blame her ex-boyfriend for harassing her has generated conversation because of how peculiar it is.

A young British woman, identified as Courtney Ireland-Ainsworth, was sentenced to 10 months in prison for trying to frame her boyfriend in an alleged plot of threats against her life.

According to international media The 20-year-old woman sent threats from up to 30 fake accounts she created on the Instagram social network and used them to go to the police and frame her boyfriend, Louis Jolly, accusing him of being behind them.

The messages that his ex-partner had supposedly sent they were vile and explicitly violent, they spoke of wanting to stab the young woman to death, of sticking knives in her chest.

Despite the young woman’s lies, her ex-boyfriend Louis Jolly, was charged with assault and stalking after she made 10 police statements saying he was stalking her, showing the messages as evidence.

On six occasions Jolly was wrongfully arrested, spent a total of 81 hours in custody, including overnight pre-trial detention, until a protection order was issued in favor of Ireland-Ainsworth.

The 22-year-old was released on bail. but he was prohibited from leaving his house and was even fired from his job, for the false complaint.

According to a British court, all this was caused by a network of deceit created by Courtney Ireland-Ainsworth to take revenge on her ex.

Registrar Ian Harris said during the Ireland-Ainsworth hearing, “you created a completely fictitious but superficially credible web of poisonous hoaxes for more than five months.”

In addition, Liverpool Crown Court heard Ireland-Ainsworth, and then the details of her “deliberate and malevolent lies”.

“You said that after he was arrested, the harassment got worse. You provided footage of damage to property and yourself, where you said he stabbed her with a Stanley knife, and there was a scar on her chest,” Harris added.

When the police received the data they had requested from Facebook, the company that owns Instagram, to track the accounts from which the threats came, information showed that at least 17 Instagram accounts had been created with two of Ireland-Ainsworth’s email addresses and IP addresses connected to her home and mobile phone.

The young woman was arrested and interviewed in December 2020, when she confessed, before the Crown Prosecution Service dropped accusations of harassment and assault against her ex-boyfriend.

For his part, the defense attorney, Jim Smith, assured that the young woman was 19 years old at the time of the events, so she was immature and had been diagnosed with post-traumatic stress disorder (PTSD).

“She tried to minimize during that interview what she had done. He eventually admitted it. She said that her ex-boyfriend, Mr. Jolly, was bothering her, but in order for the police to believe it, he sent false messages to the police so that they would take him seriously, “said the prosecutor.