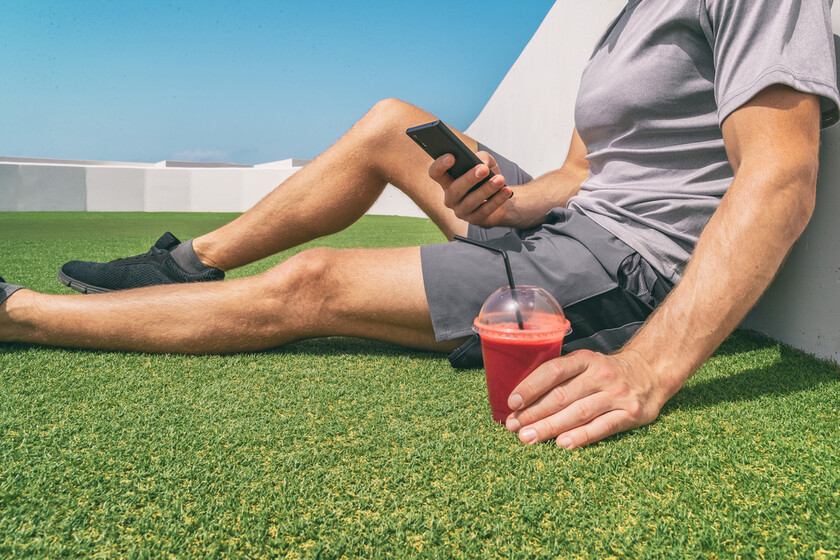 The beet juice It has ergogenic effects on cardiorespiratory endurance, which benefits endurance performance.

This is important since in competitive sports, a performance improvement of between a 0.5% and 1.5% is considered a critical difference.

Index hide
1 What level of evidence does beet juice have on sports performance?
2 Nitric oxide, the key
3 Keep in mind the limiting factors of endurance performance
4 What are the short-term effects of beet juice on performance?
5 What happens to performance if we drink beetroot juice chronically?
6 Beet juice could also improve performance at altitude
7 When do I take it and how much?
8 So is beet juice effective?

What level of evidence does beet juice have on sports performance?

The Australian Sport Institute classifies sports supplements according to scientific evidence and on the basis of a risk-benefit analysis of each one, all carried out by a group of expert scientists in medicine and sports nutrition.

This classification places beet juice with a level of evidence Awhich means that it is an approved supplement, that is, that it is a supplement that has been scientifically evaluated and its benefit has been proven when used according to a specific protocol in a specific sport situation.

Beet juice is a scientifically evaluated supplement, its benefit having been proven with the highest degree of evidence

This post is based on a systematic review of the Effects of beetroot juice supplementation on cardiorespiratory endurance in athletes, although in recent times many new studies have been carried out that support its effects in high-level training.

Supplementation with beet juice is used due to its high content of inorganic nitrate (NO3-)a compound that is found in other vegetables and processed meats (as a preservative).

Once we ingest it, the inorganic nitrate is reduced to nitrite (NO2-)which is absorbed in the stomach and intestine, being the precursor of nitric oxide (NO) in the blood.

To this Nitric oxide important hemodynamic and metabolic functions are attributed to it, being considered a important vasodilator capable of increasing blood flow to the muscle and favoring the transfer of oxygen to the muscle.

In turn, nitric oxide is considered a immunomodulatory and a stimulator of gene expression and mitochondrial biogenesisin addition to improving mitochondrial efficiency and glucose uptake in the muscle and enhancing the processes of muscle relaxation and contraction.

Due to its nitric oxide-mediated effects, beet juice has been proposed in the therapeutic treatment of people with chronic obstructive pulmonary disease, hypertension, heart failure, and insulin resistance.

These effects have in turn led to beet juice being used as an ergogenic aid in sports, especially cardiorespiratory endurance modalitiessince, as we have said, it increases the concentrations of nitric oxide, whose functions will be the key to increasing endurance performance.

Keep in mind the limiting factors of endurance performance

What are the short-term effects of beet juice on performance?

Acute supplementation with beet juice can increase muscle blood flowfavoring the supply of oxygen to the mitochondria, which means that it stimulates oxidative metabolism.

In addition, it must be taken into account that supplementation with beet juice could improve the muscle contraction and relaxation processes.

What happens to performance if we drink beetroot juice chronically?

Chronic supplementation with beet juice could improve the efficiency of mitochondrial respiration and of the oxidative phosphorylationsomething that would not happen only with its acute supplementation.

In turn, as with its acute supplementation, it could improve muscle contraction, positively affecting the interaction of actin and myosin bridges, modulating calcium release.

On many occasions the competitions take place at altitude, such as mountain races or mountain stages in cycling.

Despite the existence of conflicting information and data, supplementation with beetroot juice may be effective in improving performance in situations of hypoxia, since could improve oxygenation at the muscle levelreducing the detrimental effects of hypoxia on cardiorespiratory endurance performance.

For those who don’t know, hypoxia refers to a decrease in the amount of oxygen supplied by the blood to the organsas it happens in the altitude.

When do I take it and how much?

The effects of supplementation with beet juice are observed from 150 minutes after ingestion. Therefore, you should take a few 90 minutes before the effort since the peak value of inorganic nitrate (NO3-) occurs 2-3 hours after ingestion.

At the time of ingestion oral antiseptics should not be usedsince it has been shown that they can prevent the increase in nitrite (NO2-) levels.

In terms of quantity, most of its positive effects on endurance performance occur with a dose of 6-8 millimoles of inorganic nitrate (NO3-), although it is possible that higher performance athletes may require a slightly higher amount (10 millimoles).

As this is difficult to measure in practice, you can choose to drink a glass of beetroot juice 2-3 hours before of our endurance exercise.

So is beet juice effective?

Although the literature shows contradictory data, the findings of other studies lead us to hypothesize that beet juice supplementation could mitigate the deleterious effects of hypoxia on cardiorespiratory endurance in athletes.

As the effects of supplementation with beet juice are observed from 150 minutes after intake, beet juice should be taken about 90 minutes before exertion since the peak value of inorganic nitrate (NO3-) occurs 2-3 hours after ingestion.

The dose should be about 6-8 millimoles of inorganic nitrate (NO3-)although higher performance athletes may require a slightly higher amount (10 millimoles).

Pictures | iStock, Unsplash In Vitónica | Everything you need to know about resistance training and how it can help you lose weight