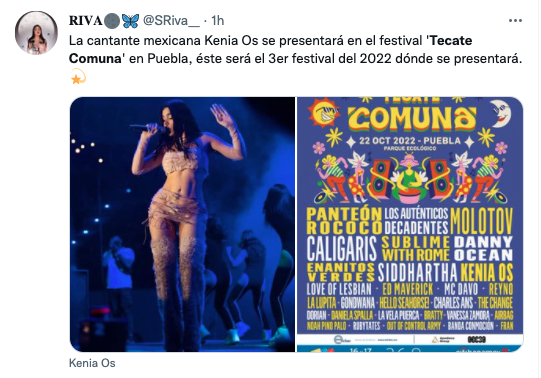 Festivals, concerts and massive events are already a frequent reality Within the national territory, these festivals have generated that the economy of certain places is reactivated, also allowing national and international tourism to once again enjoy the great stages and natural venues that Mexico offers, as well as bands and artists such as Kenya. Os, who have trained generations and new musical proposals, an example of this is the virality that it has had in a few hours, the poster presented by Commune Tecatefestival, which will take place in the state of Puebla.

nomamen that my favorite bands come to the Tecate commune, what a fart, ahhhhh🤩🤩🤩🤩

Tecate Comuna is one of the festivals, with a few years of tradition, since its first edition occurred in 2019, where artists and bands of the stature of Caifanes, The Offspring, Juanes and Maldita Vecindad shone; Despite his short time in the competition of massive events, he has stood out in the taste of people, proving once again why he has earned his placeby presenting a poster, which the community has pointed out as very complete, which will feature luxury bands and new talents.

💳 #PreventaCitibanamex May 19 and 20
👉 Free sale from May 21
🎫 Tickets through Eticket pic.twitter.com/elKkjya9WD

A few hours ago the official line up of what the festival will be was announced Tecate Comuna, which will take place in the Ecological Park in Puebla, Mexico, on October 22, and that will present in succession 2022 bands such as Molotov, Panteón Rococó, Los Auténticos Decadentes, Charles Ans, Caligaris, Enanitos Verdes, among others, being one of the guest artists that most surprised fans, the appearance of Kenya OS.

The Mexican singer Kenia Os will perform at the ‘Tecate Comuna’ festival in Puebla, this will be the 3rd festival of 2022 where she will perform.💫 pic.twitter.com/hENQNmePJR

As a result of the revelation of the Tecate Comuna cartel, social networks have become a trend for the singer, Youtuber and content creator Kenya Os, who announced that he will be presented as part of the festival’s star poster, causing a search to generate a trend within the platform and social network Twitter, which is why has generated diverse reactions among the community, due to those who celebrate its appearance and those who do not consider it relevant to the festival.

Read:  This is how fans react; "I've never been excited to see Barbie"

KENYA OS IN TECATE COMMUNE
WHAT DO YOU THINK IF WE TREND THAT PHRASE?

juki the one who does not put 10 comments with the phrase: KENIA OS IN TECATE COMMUNE ❤️ 🩹

juki the one who does not put 10 comments with the phrase: KENIA OS IN TECATE COMMUNE ❤️ 🩹

Cwill receive teachers’ salaries according to their current income level; they will distribute 25 thousand million pesos
Mauricio Gutiérrez, new ambassador of Corporate Excellence – Center for Reputation Leadership in Mexico
David Shane will clean up Amber Heard’s image, without first doing it with his
Bitcoin Fails To Come Out Of Collapse Amid Threats Of New Regulations

Spanish automotive suppliers sound the alarm, their situation is delicate