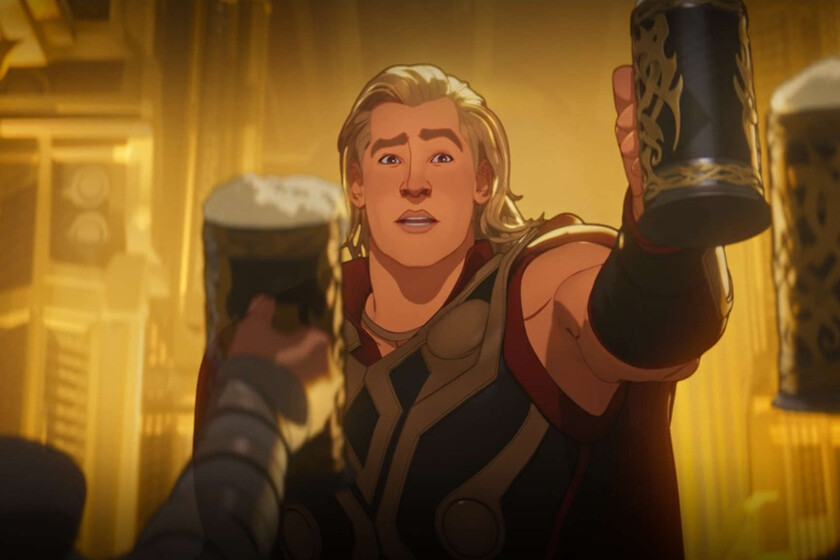 The touch of humor that Marvel Studios productions give off is always the subject of controversy as it is considered something out of place in the genre. To the most detractors I will tell you not to come close because the seventh episode of ‘What if …?’ it’s pure half-hour comedy.

With the title of What if Thor was an only child?, AC Bradley proposes us a parallel universe in which Odin returned the baby Loki to his people. Without a zascandil to balance and become the “responsible brother”, the goldilocks of thunder are free from obligations.

By the way, from here spoilers for episode 1×07

Thus, at the beginning of the episode, with his mother away from the palace, Thor will see a golden opportunity to throw a planetary party in Midgard, since the planet “It is so underdeveloped that not even Heimdal notices it”.

His appearance in Las Vegas, witnessed by a girlfriend Jane Foster and her assistant Darcy, it will be the prelude to an invasion of partying aliens: from skrulls to the very Guardians of the galaxy and a gigantic Loki, all of cosmic Marvel in an Asgardian rampage that can literally destroy the Earth.

Obviously, this immediately catches the attention of SHIELD, who will call in the heavy artillery, Captain Marvel, to drive out these festive aliens. Giving rise to the most epic part of the episode: the hand-to-hand combat (with hammers and plasmas from time to time) between the god and the ultra-powerful human.

Read:  caustic and apocalyptic Spanish cinema regardless of fashions and trends, one of the comic jewels of this year

It is precisely Brie Larson one of the great absences of this episode, which instead features the voice of Alexandra Daniels. Anecdotes aside, what we find in a good balance between the most humorous part and the most epic. A good demonstration that comedy can be done without losing the spirit of adventure.

A great example of superhero comedy

Because in general we find a magnificent episode in which the Disney + series embrace his humorous side. Just like ‘Thor: Ragnarok’ did (and Taika Waititi actually appears), it’s thirty minutes of having a good time.

As usual, the episode says goodbye with a dark twist. On this occasion, an army of ultrons advances ready to end everything led by Vision. What this might mean in the future (we will probably revisit it in the season finale) is something we can only conjecture. And in fact, we are going to do it.

Because, in fact, we are back to something related to Hank Pym. The once Wasp Man / Giant Man / Goliath / Yellow Jacket has already appeared as the cause (inadvertently or consciously) of several of the ‘What if?’ Scenarios. A common factor that, I hope, will be explained in some way.