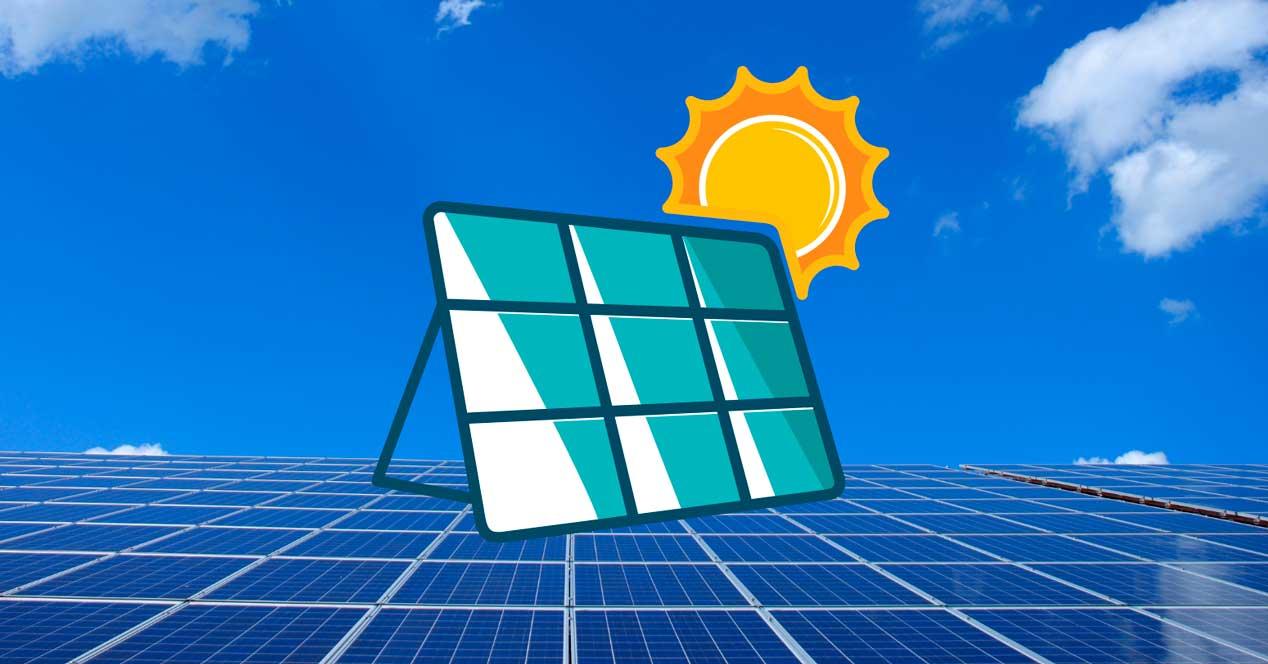 Spain is a country where we can enjoy many hours sunlight And this has advantages such as a saving in what you will end up paying for heating or electricity, for example, as long as you take advantage of this energy.

Index hide
1 What is it
1.1 Types
2 Advantages and benefits
3 Applications
4 Costs and how to install

As its name suggests and we already know, solar is a renewable energy that takes advantage of radiation from the sun. It is inexhaustible, It’s a source natural and it is one of the renewable easier to produce in areas like Spain where we have a large number of hours of sunshine. There are several types of it (thermal, photovoltaic, passive …) and it has many benefits such as less impact on the environment, ecological, suitable for “everyone” and affordable if what we are looking for is to have an installation at home.

We can use solar energy to produce hot, to produce electricity. Both at an industrial or global level and at a particular level in small devices such as a portable battery or a lamp. In the next few paragraphs we will see its advantages and benefits, its uses or the types that exist.

Although we usually talk about solar energy in a global way, there is not only one type. The sun’s rays are used in two different ways: with thermal or photovoltaic plates. Although there are also hybrid plates that unite the two previous technologies in the same panel: they allow us to take advantage of the sun for electricity or heat as we need with the same installation.

Photovoltaic solar panels they are more expensive but they are in charge of catching the light. They transform radiation into electricity and it is common for them to use accumulators to store energy if we want to have self-consumption. That is, you accumulate light during the day so that at night you can use that accumulation of stored energy for lamps, etc. It is the type that is used for public lighting, for example, for automobiles and vehicles (cars that accumulate and refill their batteries while there is sun) or for electricity in a home or business and self-consumption.

For its part, Thermal solar energy it is cheaper but does not allow self-consumption. What it allows is the generation of hot sanitary water in homes, transforming radiation into heat. It uses reservoirs to store the heat it “traps”. In this case, the uses are usually for sanitary hot water (it is the most common) or for solar heating in buildings, for example, but also for the heating of swimming pools.

To use this type of energy there is not only one type of plates. There are different. Beyond utensils that use solar panels for “little energy”, such as power banks to recharge the mobile phone, outdoor LED lights that you do not have to charge if you want to illuminate your terrace, flashlights and other small portable devices such as speakers, for instance. They are still options like the previous ones, but smaller photovoltaic panels and applicable to any device.

There are some drawbacks such as the cost or the investment that we have to make for the plates in addition to the “dependence” on the sun depending on where we live or according to the time of day, of course. But there are also many advantages and benefits if we use this type of energy.

We reduce consumption or dependence on fossil fuels and reduce environmental pollution, although we must bear in mind that this does not mean that solar panels do not generate waste, but that the manufacture, transport and recycling of solar panels also cause indirect pollution.

The sun is unlimited so we don’t have to worry about whether or not this energy can be used up.

The only “concern” or disadvantage is that we will depend on whether it is sunny or not at that time, on the climatic conditions of each area. It is not an option, even if it is unlimited, for certain cities or certain places where it always rains. The luck or advantage is that Spain is a country that can boast of sun for many hours a day.

For the end user there is a medium and long-term savings. You get to pay less on the bill thanks to the fact that part of the electricity or energy you consume is used through the sun without having to pay for it. In addition, the maintenance of the solar panels is very low, we will not have to spend money and effort in maintaining the installation in perfect condition.

What can we use solar energy for? In our day to day there are many options in which it is a good source with multiple options …

One of the most frequent uses is to use panels for heating water. Systems that have a catchment, accumulation and distribution system through a circuit that heats the water for free.

Converting the sun’s rays into lighting is another of the most frequent uses. Both individually, with lamps that have a small plate for self-recharging, and globally for entire homes. Lights that take advantage of energy during the day and store it for use at night. I do not stamp at the domestic level but also in public lighting systems: streetlights, Christmas lights … for example, the Infanta Elena Park in Seville is lit by streetlights that reduce energy consumption and also overcome other barriers: the electricity grid did not reach this area of ​​the city and traveling was uncomfortable and little safe. A pilot project allowed the installation of twenty Philips solar street lights.

Although it may not be something that you apply to your daily life, irrigation has also changed taking advantage of pumps that work with solar energy.

We can use solar heaters to convert the sun’s rays into thermal energy and achieve 70% savings. Not just to get heating in winter or air conditioning in summer but also for specific cases such as heating pools or a spa, for example.

There are vehicles that already work through solar energy. They are not usually cars for domestic use at the moment but solar cars are already a reality and for years they have been working with prototypes that have plates on the top to take advantage of it and turn it into protection. The Toyota Prius Plug-In itself launched in 2020 features ceiling panels that allow to power a specific battery and this battery transfers the energy to the battery of the electric motor of the vehicle. It is not your only source of energy but it does contribute to recharging, for example.

Costs and how to install

If we want to do an installation at home the price depends on several factors, as well as the savings that we are going to achieve in the medium and long term. How long it will take to pay off the solar energy installation depends on the area in which you live, on whether or not the sun shines. It will not be the same to live in cities where the sun always shines than in cities with a rainy climate where there is never sun. Also, it wouldn’t make sense to do a plate installation if the orientation is bad, for example.

How much does it cost? It depends. It depends on the energy you need but also of other factors. The three differentiating factors are: size of the installation or peak power, quality of the photovoltaic components that you are going to install or difficulty in doing it. It depends on the size that costs us more or less, but we will also achieve a greater or lesser return that will imply long-term savings.

There are many companies that offer installation of solar panels at home to use solar energy as an alternative energy source. For example, Ikea has its system SOLSTRALE available in normal or plus version and in two different sizes. The most affordable option includes four 340W or 390W photovoltaic panels “for a house or small home with limited consumption during the day” for a price of around 4,100 euros with VAT included in its normal version or about 5,000 euros VAT included in its PLUS version . If your house is larger, the Ikea price for twelve 340W or 390W panels for 6,633 euros or the Plus version for about 7,800 euros including VAT. In this case, it is recommended for larger homes.

The same happens in large facilities, offices … It will depend on the use (an office with 50 working computers, air conditioning, electricity … is not the same as a house. So it is convenient to do a test that advises us on how we can install and what we must take into account.