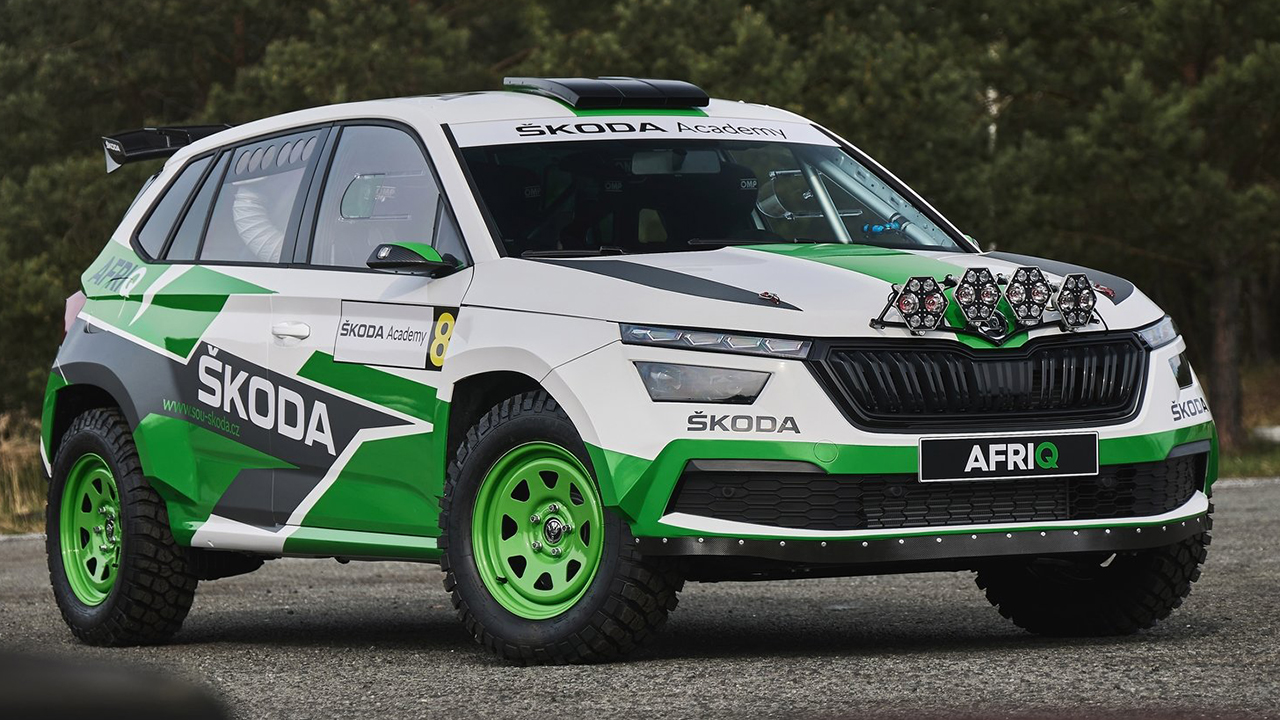 The new Skoda Afriq has been presented in society. This is the new car created by students of the Skoda Vocational Training School. A rally car based on the Skoda Kamiq. The Skoda Motorsport sports division has also played a relevant role in the project.

The new creation of the students of the Skoda Vocational Training School
it is already a reality. It has been presented in society of the new skoda afriq. A very interesting vehicle with competition genes that comes to show what the manufacturer’s apprentices are capable of. A unique example that takes as its starting point the Skoda Kamiq, the smallest SUV marketed by the Czech brand in Europe.

A total of 25 students have participated in this project in which, by the way, the Skoda Motorsport sports division has also been involved. We are facing the 8 conceptual model, or rather «one-off», which has been brought to life. It is an initiative of Skoda Very important from an academic point of view. Students have gone back to the 1970s for the creation of the Afriq. Let’s go into detail.

Index hide
1 The Skoda Kamiq transforms into a rally car called Afriq
2 The interior of the Skoda Afriq is typical of a racing car
3 Skoda Afriq, a lighter and more powerful car
3.1 The measurements of the new Skoda Afriq

The Skoda Kamiq transforms into a rally car called Afriq

Just take a quick look at the images published by Skoda to find the most distinctive features of the new Afriq. At first glance, the rally version of Skoda’s urban SUV evokes the atmosphere of the legendary Dakar Rally. In addition, the name chosen to baptize the model also refers to Skoda’s responsibility for the Volkswagen Group’s activities in the North African region from 2021.

It has taken four months to build the car. The students dedicated some 2,000 hours to the project. One of the reasons for the heavy workload was the extensive modifications made to the bodywork of the Kamiq basic used as a base. The rear doors have been welded directly to a roll cage inside. This adds stiffness. In addition, the fenders, wheel arches and bumpers are now larger.

The body is painted white and has been decorated with numerous colored stickers. The sporty look is enhanced by 15-inch OZ Racing wheels and additional headlights installed at the front.

Leaving aside the outside, if we go into the interior of the new Afriq we will quickly be enveloped by an atmosphere in which sportsmanship is breathed. The finishes and components are typical of a competition car. Materials and elements that are not strictly necessary have been removed to reduce weight as much as possible.

Read:  G-Power puts the BMW 7 Series at the top of luxury sports saloons

Special competition seats focus much of the attention on the passenger compartment. Some seats that are accompanied by seat belts with six points. In addition, and what is equally relevant, the steering wheel and dashboard come from the Skoda Fabia Rally2 evo. The equipment also includes a fire extinguishing system, a navigation system with a kilometer counter to allow rally navigation and a recording system with cameras and microphones.

On the other hand, and for the first time in a Skoda, a device for extracting drinking water from the surrounding air. The driver and passenger of the Afriq thus have access to cooled, filtered drinking water at all times. It is a device signed by the Israeli company Watergen. It draws air from the atmosphere filtering dust and impurities. That purified air goes through a heat and cold exchange process to condense the water. This water is processed to make it drinkable. All components of this system are visible by opening the tailgate.

Changes made to the design and suspension have direct effects on the measurements. It measures 4.36 meters long and the wheelbase reaches 2.64 m. The free height of the body with respect to the ground is 180 millimeters respectively. The chassis has had to be modified in order to carry out the modifications established in the propulsion system.

The measurements of the new Skoda Afriq

Under the hood of the new Afriq is a 2.0-litre TSI four-cylinder petrol engine with 190 hp and 320 Nm of maximum torque. A block associated with a automatic gearbox DSG double-clutch seven-speed as well as a system of 4×4 drive. It is the same powertrain that we can find in the Octavia range. The exhaust system has been revised to fit all the settings noted above.

Relative to a standard Kamiq, the propulsion system used in the Afriq is much heavier. Largely because of the 4×4 drive. However, all the actions carried out by the students have allowed the Afriq to be about 100 kilograms lighter than the Kamiq.

Delivery 2022: you can still register