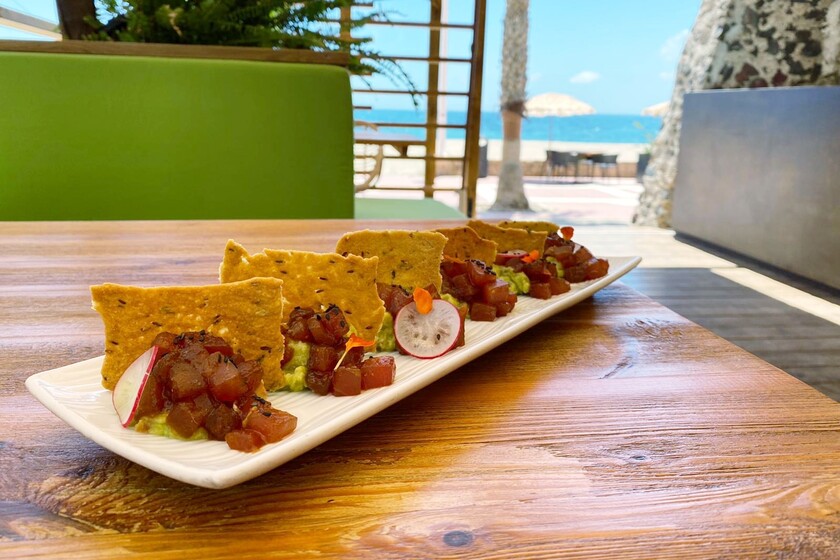 Returning to Murcia after more than a decade living in Madrid gives a different perspective of the gastronomic panorama that can be found today. Madrid’s offer is almost endless, but there is a line that refuses to disappear and is spreading throughout the country. It is the fashion of restaurants that first highlight their interior design and then want to dazzle with “traveling” menus in which the same elaborations are always repeated, with dishes that are Instagram meat and trend slaves.

In the capital there are plenty of spaces that host famous groups like Lalala, El Paraguas, Mentidero, Oter or La Fábrica. Places of strategic location with a careful design signed by well-known names in the world of interior design who look for the perfect photo but often forget to give the place its own personality and warmth, mixing up with each other, also in the menus, almost cloning elaborations in which Fusion cuisine prevails with the traditional.

But we are talking about Murcia, last Capital of Gastronomy in the ill-fated last edition of this badge, which, although extended for another year due to circumstances, unfortunately it has not been possible to take advantage of 100% of what was initially planned. And, although in recent years the Region is showing that it has a lot to say in modern, avant-garde and quality cuisine, with proper names that are known to vindicate, it is inevitable to keep in memory a fixed idea of ​​its gastronomic offer, still far from the excessive posture of the capital.

That is why approaching Restaurantes Pecado is to do it with some suspicion, although with want to be surprised encouraged by the good reviews and the enthusiasm with which friends and acquaintances recommend his visit. First of all, we let ourselves be tempted by the youngest place, in Águilas, a beautiful seaside town where one expects to eat fish and traditional dishes, but where there is also room for more avant-garde proposals. 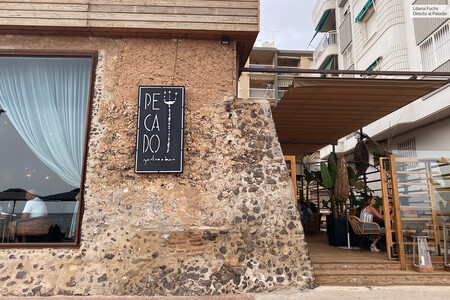 Sin was born in 2016 under that questionable concept of gastrobar which, fortunately, the group recently lost after the last major charter renewal in 2020, with the reopening after lockdown. Sin Restaurants is therefore the updated name of the partners’ project José Manuel Sanz and Pablo Barreda, entrepreneurs from the world of interior design who bet on the potential of Murcia to undertake its gastronomic journey. 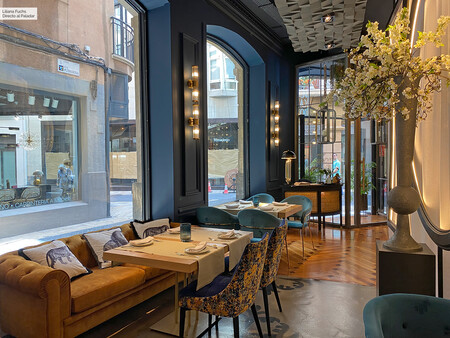 The name of does not respond to a specific origin, but it soon stood out as the most appropriate as it is an attractive term that reflects very well the essence of the project they had in mind. From a promotional point of view, in addition, ‘Sin’ gives a lot of play to present the kitchen, the decorative style and the way of presenting the menu and the different events that they organize in their premises.

Opened this summer in a new location after about five years next to the popular Mercado de Verónicas, Pecado Murcia (Frenería, 6) is now more centrally located, in a quiet street of century-old stately buildings, with direct views of the imposing tower of the Cathedral of Murcia, between the Plaza del Cardenal Belluga and the busy Gran Vía. 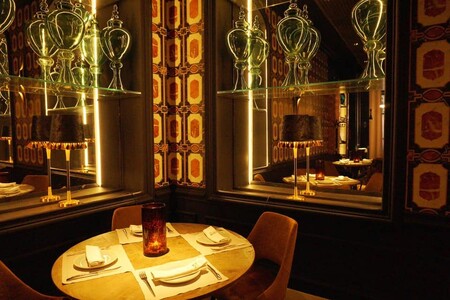 In a style art deco New Yorker that combines different eclectic elements with small differentiated spaces, large windows and many mirrors, the Murcia restaurant has a more sophisticated and urban airWithout overpowering, it will undoubtedly give much more play at nightfall inviting you to linger over the table with its cocktail menu.

In Águilas (Iberia, 13), however, the design takes advantage of the striking space of a old abandoned esparto warehouse many years ago, standing seven meters high and located directly in front of the sea. A privileged enclave that offers a small but pleasant terrace, as well as some tables on the promenade itself, ideal for filling the restaurant with tropical and exotic airs, with many curious details for curious eyes. 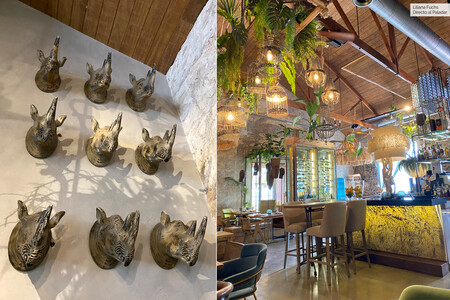 It is Pecado Águilas, without a doubt, the restaurant that surprises the most due to its striking construction and jungle world to the one that transports you when you go through the doors, as it has nothing to do with the hotel offer that surrounds it around the beaches, the port or the interior of the seaside town.

A modern menu that does not forget Murcian cuisine

The cuisine of Restaurantes Pecado is defined, in the words of its co-owner José Manual Sanz, as a “team kitchen”, alluding to all the staff of both places who, with different origins, styles and ages, share the menu proposing, testing and modifying the dishes and their presentations. 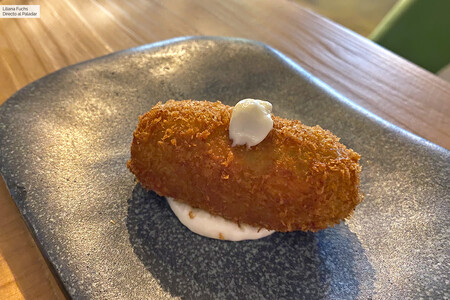 This translates into a letter with proposals that will hardly surprise anyone who frequents the gastro scene of other more cosmopolitan capitals such as those mentioned in Madrid, although less present, even in cities such as Murcia or Águilas. Fusion cuisine, ingredients and techniques in fashion and flavors from all over the world they come together in a very complete but not overwhelming menu, with many perfect dishes to share.

There is no shortage of croquettes, which here are also accompanied by dressings, as it seems to have become fashionable, although luckily they do it with sense. At 2 euros per unit in Águilas, and 2.2 euros in Murcia, it is appreciated that there is a meat, seafood and vegetarian option, with nods to the product and Murcian cuisine, especially highlighting the very successful croquette of michirones with sobrasada cream, succulent and perfectly executed.

Read:  Secret fiber and mobile rates to retain you, do they exist or are they a myth? 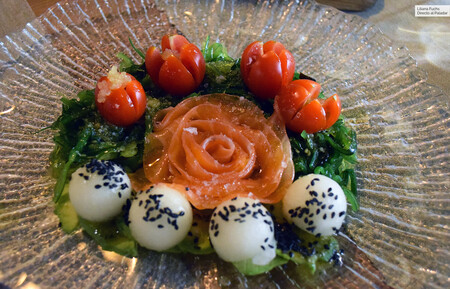 The menus of both restaurants are practically identical, although there are some dishes that are only offered in one or the other, such as rice, on request, from Águilas (a band -12 euros-, and from Murcian flat with vegetables from the garden -15 euros-, another 100% Murcian reference).

Playing with the concept of experience around this “sin”, the dishes are divided into sections with suggestive names – temptations, original sin, Eden, venial sin, carnal sin and free from sin – an idea funny although somewhat confusing for being a bit caught with the hair in certain dishes. 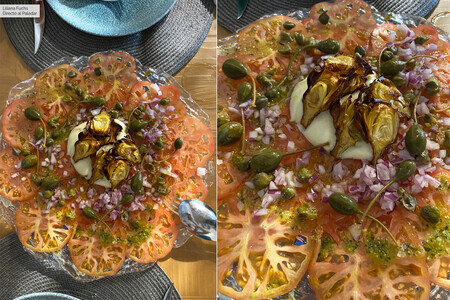 Although many supposedly exotic ingredients are already more than seen, such as the wakame seaweed and salmon salad (15 euros), in Pecado they know how to add a special touch with other products in which the quality of the raw material is taken care of and, above all, execution and presentation. They are dishes that will delight the instagrammers and anyone who enjoys the table first for the view.

A quality smoked salmon, Murcian melon balls, tomatoes crowned with spherifications and the special touch provided by a soft homemade pesto sauce give another air to the aforementioned salad -Italian pesto with Japanese seaweed works surprisingly well, to repeat at home- , and we almost clap our hands not find anywhere the already boring burrata. Instead, we will see fresh goat cheese, another Murcian product. 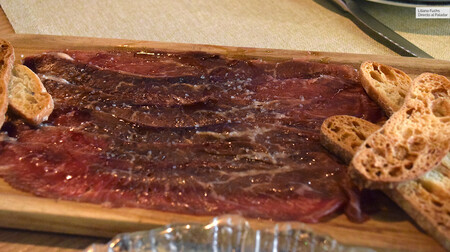 We loved the spectacular seasonal tomato slices salad (12.5 euros), very fine and tasty, topped with a soft foam that contrasts with the artichokes with a crunchy exterior and a juicy heart, well seasoned with herbal oil and a selection of Murcian pickles quality. Another example of how in Pecado they do not forget the land of Murcia and its products, giving them a refined presentation but without taking the limelight, bringing more modern cooking techniques to the traditional. 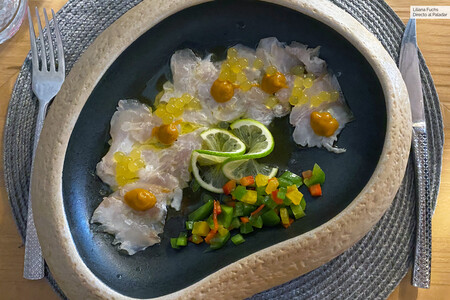 There is no burrata but yes tartares, tataki, tiradito -corvina (14 euros), very tasty and tender, well accompanied with the Roteña sauce and the citrus vinaigrette so refreshed- or the so media octopus (20 euros). We forgive it because we love it and because it is also a typically Murcian product; here a generous leg is baked and then braised on the grill to make it very tender on the inside and crisp on the outside, accompanied by purple potato puree and different sauces.

The service in both places is impeccable, with an attentive, prompt and friendly staff, with a good knowledge of the menu and the dishes and always ready to help. The menu provides good information on allergens and you can also inform the staff of possible allergies or intolerances to adapt some of the dishes, another detail to be appreciated. 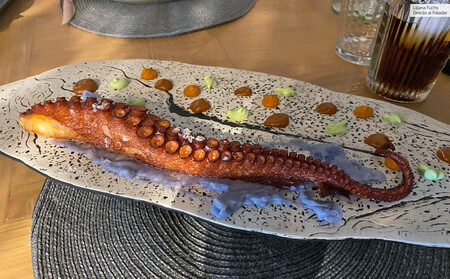 It also adds points that on both visits they served us a courtesy appetizer -artisanal Murcian pickles and tuna paté with toasts- and that they do not serve you the typical basket of bread without asking for it, a custom that is too widespread in many places in Madrid and that they charge to unicorn blood price with the appetizer you didn’t order. 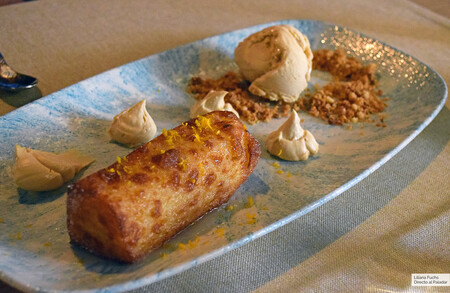 Crystallized fried milk with the aroma of cointreau, creamy and nougat ice cream.

The desserts do not disappoint, with its own elaborations that combine traditional recipes, local ingredients and more international touches with an excellent presentation, without surrendering to the already tiresome cheese cake or the trite chocolate coulant. Delicious crystallized fried milk with nougat ice cream (6 euros), very original the lemon millefeuille with crunchy paparajote and Asian coffee ice cream (8 euros); plus murcianidad reinvented. The 70% chocolate sphere (7.5 euros) is a must for chocolatiers.

What to ask for. Croquettes lovers cannot miss any of their options, being the michirones the most original and Murcian (2-2.2 euros). Because it is also out of the ordinary, the marrow glazed with hedgehog cream (10 euros) can be a good option for those looking for something different. Also highly recommended is the salad of tomato slices already mentioned, as well as the “almost carpaccio” of white shrimp (15 euros). Chocolatiers must ask yes or yes for the chocolate sphere.

all quests and rewards from the Central Power event