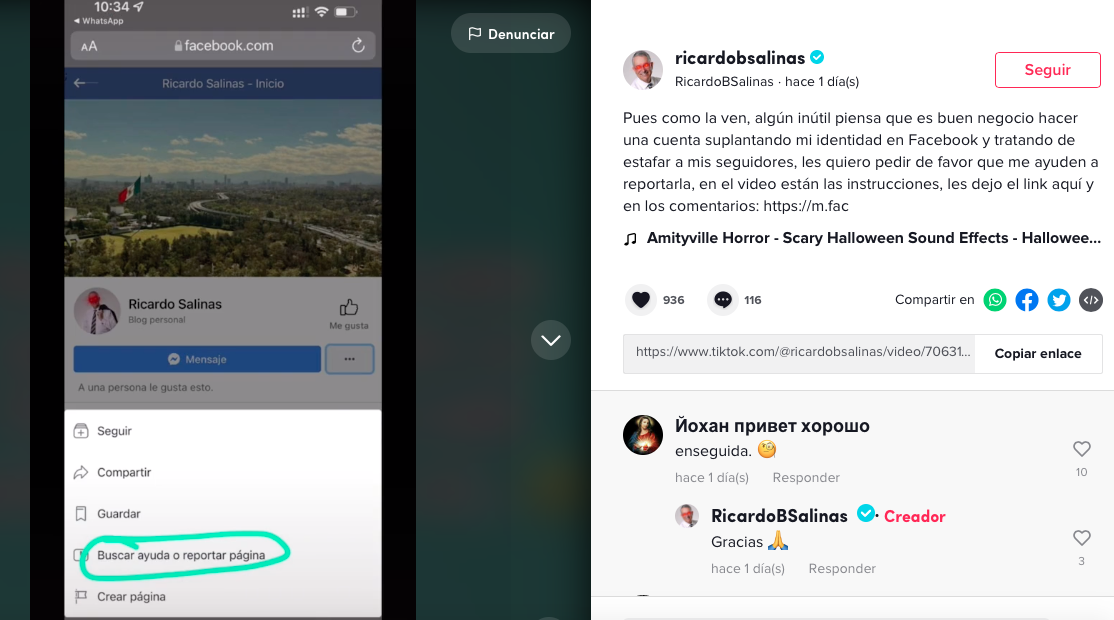 Ricardo Salinas, one of the most controversial Mexican figures on social networks, recently warned about a fake Facebook account that seeks to defraud his followers with his identity.

The Mexican businessman shared a video through his Tik Tok account where he asked each of his followers to report an account on said social network that was supplanting his name in order to carry out scams.

“I want to ask you to please help me report it, the instructions are in the video, I leave the link here and in the comments,” says Salinas’ publication on Tik Tok.

@ricardobsalinasWell, as you see it, some useless person thinks it’s good business to make an account impersonating my identity on Facebook and trying to scam my followers, I want to ask you to please help me report it, the instructions are in the video, I leave the link here and in the comments: https://m.fac♬ Amityville Horror – Scary Halloween Sound Effects – Halloween Sound Effects

The publication, which has at least 936 likes, was received in a good way by the digital pulse who told the businessman who owns Grupo Salinas that they will help him report the fake account.

Read:  Conspiracy theories only exist in the minds of those who invent them

He is not the first public figure or even a brand that denounces this type of scam through accounts with his data on social networks. Scams through social networks, or platforms like WhatsApp, are becoming more popular every day due to the reach they have throughout the population.

According to the Senate Gazette, “more and more criminals are taking advantage of the speed, convenience and anonymity offered by modern technology to carry out various types of criminal activities such as hacking.”

For its part, a Cyber ​​Crime Report by Norton, Symantec, detailed that Mexico occupies the first place with the presence of cyber crime. But it also ranks first in the presence of cybercrime types with 71% of them on your network. The study by the security company details that the most common and most avoidable attack is malware or computer viruses.

In this sense, the Senate Gazette indicates that until recently the perpetrators of computer crimes were isolated individuals or groups made up of a few people.

“For these things you have to look at the reviews”; Aliexpress CM reacts after seeing “bloody” product

Another Tinder scammer gets four years in jail

This Argentine abandoned the Tinder scammer: on a date, she discovered the deception

a user made $14,000 selling indie games without permission