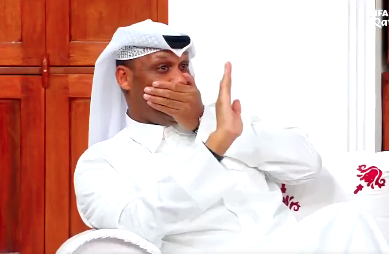 The qatari television decided to seize the moment when Germany was eliminated to make a taunt with the same sign that the team did as protest against discrimination against people in the community LGTBIQ+.

The Qatar World Cup It has had a bad reputation for violating human rights, as they have strict rules that harm the well-being of citizens. In this place, you cannot afford to show any type of affection in public. Hugs, caresses and any type of kiss are totally prohibited. , basically in all middle eastern countriesshowing affection and intimacy in public is very frowned upon and things can get complicated if it is done by people of the same family. community LGTBIQ+, Well, in addition to being prohibited, it is also illegal, so if any suspicious act is discovered, people could be arrested.

The case is very serious, since even the homosexuality It is seen as a mental illness, this crime could get people up to 7 years in prison. Khalid Salmanthe ambassador of the 2022 World Cup recently entered controversy for his statements that incite hatred.

“They have to accept our rules. Homosexuality is haram. Do you know what haram means? I am not a strict muslim but why is it haram? Because it is a mental disorder” mentioned Khalid Salman.

🇶🇦 The ambassador of the World Cup, Khalid Salman, referred to h0m0sexuality as a “damage to the mind” in an interview he gave to the German public channel ZDF. “They have to accept our rules,” he said.
If you have trillions of dollars you can say what you want it seems pic.twitter.com/7hVhm88dvj

Due to all this controversy, the team from Germany decided to join the protest of “one love” which was driven by the Dutch Football Federation in 2020, With the aim of expressing a message of unity and raising their voices against all forms of discrimination, other teams supported the idea of ​​wearing a bracelet to show solidarity and as a form of protest against the homophobia that is demonstrated in Qatar, however the FIFA He pointed out that if used there would be consequences such as economic fines and yellow cards, for which several teams backed down, due to which the German team responded against the ban issued by the FIFA posing covering his mouth before starting his duel against Japan.

“We wanted to give a signal that FIFA is silencing us,” said Hansi Flick, the Germany coach, after the game.

The German team was recently eliminated from the World Cup in Qatar, for which they have been criticized for their poor results because after being the world champions in Brazil 2014, the team has shown a poor performance since they were eliminated again in the first round as it happened in Russia 2018, they defeated Costa Rica 4-2, however it was not enough to achieve their classification, since they managed to pass Spain on goal difference, from group E.

Read:  Spain could not understand Ronaldo Nazario's goodbye to his car

After this defeat, Qatari television showed its mockery, as some people are shown posing covering their mouths imitating the protest of “one love” that the German team did, while waving their hands in the form of farewell.

This is how Qatari TV reacted to the elimination of Germany, referring to the protest that the team made in their first game.

This has generated disapproval on social networks, as the hashtag “shamefulby various netizens.

It is known that Qatar is a very closed country, there are several things that must be eradicated because at this moment it is a very popular place due to the World Cup, so tolerance and respect should be shown to avoid any message of hate and discrimination.