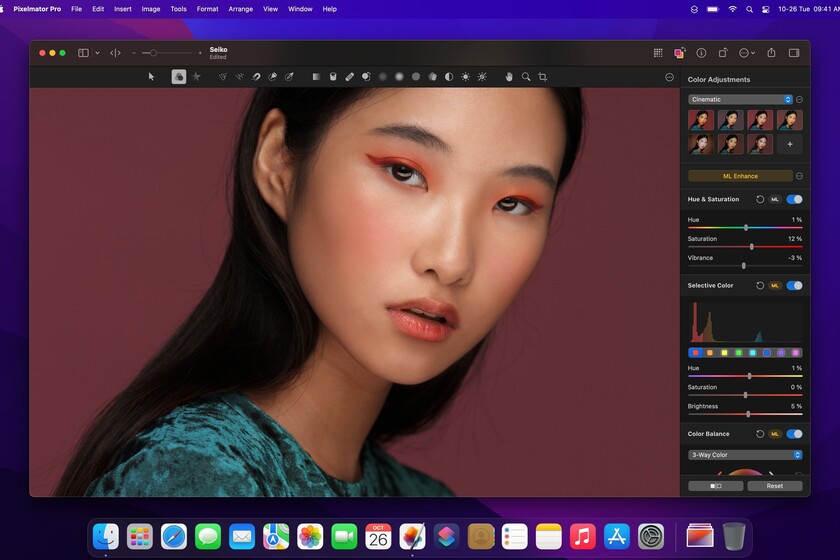 Creative and professional application developers have been reeling in seeing the potential of the new MacBook Pros. We have Pixelmator, Affinity suite updates and exciting news from Adobe that should put a smile on the faces of designers and other artists.

First of all, Pixelmator has introduced its version 2.2 nicknamed “Carmel” with support for macOS Monterey and its shortcuts. It is also capable of using all the cores of the M1 Pro and M1 Max chips in its processes, and respects the portrait effect that we can use in our Mac’s FaceTime camera when importing photos from there.

The update is free for those who already have a license for the application, which costs 39.99 euros in the Mac App Store. Here is an example of what has already been tested with these shortcuts from Twitter:

With @pixelmator‘s new Shortcuts support, 11 actions are all it takes to take a photo, add branding and customized text, edit, resize, and crop for both web and social. It’s time for everyone to get on the Shortcuts bus. pic.twitter.com/VMaFEcx8fM

On the part of Affinity, they confirm that their three applications are already prepared to work with the M1 Pro and M1 Max chips. Apple itself has confirmed that the working speed grows 5 to 8 times more depending on the chip used, and in Affinity they promise very good results with the color profiles of the mini-LED screen and its maximum 120Hz of ProMotion.

Read:  Microsoft releases Build 22489 for Windows 11 on the Dev Channel adding the "Your Microsoft account" section in configuration

Affinity has made its own benchmarks to the MacBook Pros and they claim that the M1 Max is the most powerful GPU they have ever tested:

The # M1Max is the fastest GPU we have ever measured in the @affinitybyserif Photo benchmark. It outperforms the W6900X – a $ 6000, 300W desktop part – because it has immense compute performance, immense on-chip bandwidth and immediate transfer of data on and off the GPU (UMA). pic.twitter.com/iPg3L56y2u

Finally we have the arrival of After Effects optimized for Apple Silicon chips hand in hand with Adobe, although at the moment in beta. Still it should represent a very significant increase in performance over Intel chips.

All this should be a good appetizer for those of you who are releasing one of these new MacBook Pro and want to do your first tests with professional software. From here, we should also start receiving more news about the rest of the applications being updated to be able to take advantage of these new chips.