NATO was always a taboo subject in Sweden and Finland. Until Vladimir Putin came 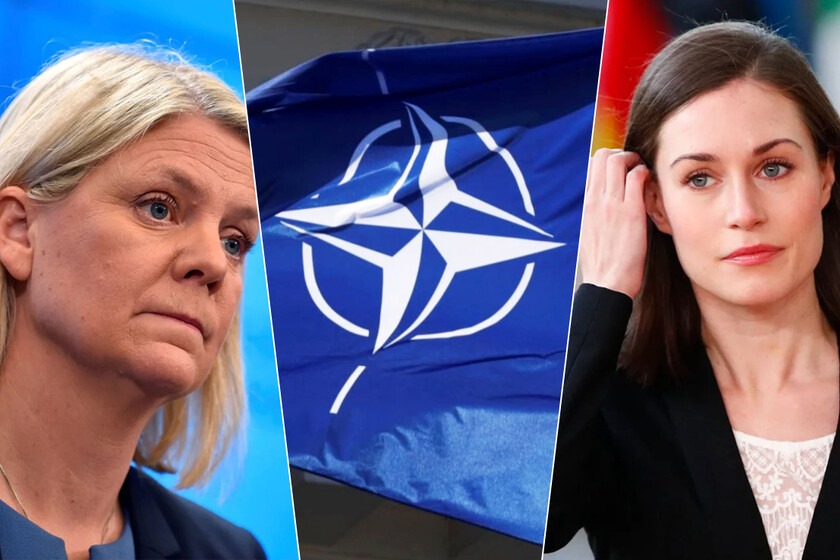 No event accelerates the pace of history as much as a war. Questions that one day seemed unimaginable enter the realm of the possible overnight. We have seen it, for example, on account of the reaction of the European Union in terms of weapons and the military budget. And we have seen it in political positions that were once taboo and that today, in a matter of months, have ceased to be so.

Towards NATO. The clearest case is that of Sweden and Finland, countries encompassed within that abstract framework that we call the “West” and included in countless institutions and political-economic synergies along with the rest of the European countries. Synergies that have never included NATO. Both states have maintained a historical policy of non-alignment, despite the fact that in practice they have been part of the bloc western.

A turn. But this belonging has been more putative than practical. This is something that could change in the coming months. Both Sweden and Finland have opened a deliberative process on joining the alliance. The tone is much more agitated in Finland, a country that shares thousands of kilometers of border with Russia and that has barely accumulated 100 years as an independent nation… From the Russian Empire.

At the end of March, 60% of Finns were in favor of joining NATO. The government has quickly picked up the gauntlet thrown down by public opinion. This is a historic twist: Finland had always been against joining the alliance. Favorable positions have increased by 34% since the invasion of Ukraine.

arguments. Polls show a similar phenomenon in Sweden, albeit more restrained (around 50% support). Their political disagreements are also greater. In early March, Magdalena Andersson, the country’s prime minister, suggested that any rapprochement with NATO would “destabilize” the entire region. During the last few weeks the discourse of the Social Democratic Party, to which Andersson belongs, has changed: “The invasion has changed our security position.”

NATO has already opened the door for them, for its part. If they wanted, Sweden and Finland could join the alliance this summer.

slow process. It is a complex debate, however. The Swedish Defense Minister, Peter Hultqvist, recalled this a few days ago: “Changing a defense doctrine is a very important decision that you cannot make overnight because of polls.” The non-alignment policy has been central to the geostrategic interests of Sweden and Finland for decades. Partly by choice. In part, especially for the Finnish case, by imposition.

Finnishization. His accession to NATO would end eight decades of “Finnishization”. After World War II, the Soviet Union imposed related regimes on territories formerly belonging to its empire. Not in Finland. Moscow, yes, put a tacit condition to avoid any kind of escalation between the two blocs: Finland had to remain neutral. NATO could not establish a base 200 kilometers from St. Petersburg. Otherwise, the consequences would be unpredictable.

Opening. Familiar? It is an argument similar to the one brandished today by Russia against Ukraine. Finland sacrificed sovereignty in exchange for security. Numerous theorists have raised a possible “Finlandization” for Ukraine in recent years. Such was the historical weight of the doctrine that even after the fall of the wall, when all of Eastern Europe joined NATO, Finland did not consider joining it. By then the alliance had already reached the border with Russia (Estonia, Poland).

anxieties. The invasion and war crimes in Ukraine have forever changed the geopolitical order. None of this would have happened if kyiv had belonged to NATO, it is observed from Finland. Putin’s nationalist, nostalgic and imperialist rhetoric does nothing to calm the spirits of a country that only gained its independence after a bloody Civil War and that has barely eighty years since the last invasion of Russia (the Winter War of 1940).

What could happen if Sweden and Finland finally join NATO? The scenario is uncertain. Although Russia has been clear in her warnings: there will be “political and military consequences.”