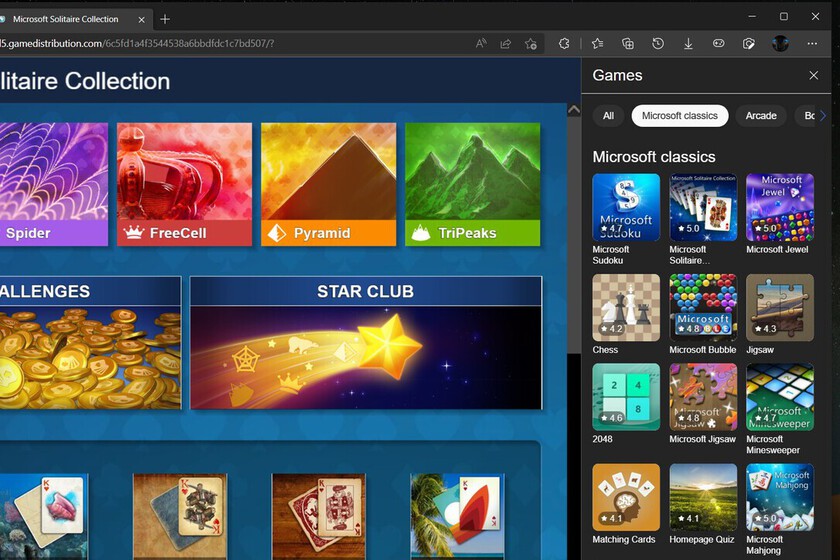 Microsoft continues to work to attract users to its web browser, Edge, and does so by adding different functionalities and improvements, the last one being one of the most surprising. If we have already seen how it allows to capture PDF’s, facilitate voice typing, play Stadia, enable groups of tabs or PiP mode … now Edge receives something different. It is a direct access to play different titles available on the web.

The tool to make it possible becomes part of Edge Canary via an integrated games panel at the Omnibar bar. It is the chosen method that facilitates access to all kinds of games available on the web, from arcade titles, puzzles, cards, sports … all from the MSN Games platform.

A most surprising twist is that the games are almost integrated into the browser. Edge now has a new function that through the Omnibar, allows you to access a series of games without leaving Edge of various kinds.

The news has come out thanks to a Reddit user, since this improvement is being distributed only in the development version of Edge, Canary and also only among a small number of users. In fact, I just tested it does show up in my browser and the new login still doesn’t show up.

Edge now has a new function although and in this case it does not have nothing to do with other improvements that we have already seen and that are related to productivity. This addition goes another way and the acceptance it has among users remains to be seen.

The truth is that with so much added, Microsoft is making Edge look more and more like Chrome and we no longer know if that is bad or good. Edge has been characterized for being an agile browser and is increasingly having more add-ons, some of them with a not too clear utility.

Will have to see what impression Microsoft receives from users who test this function to see if it decides to take it to the stable version or on the contrary it remains in a simple experiment.