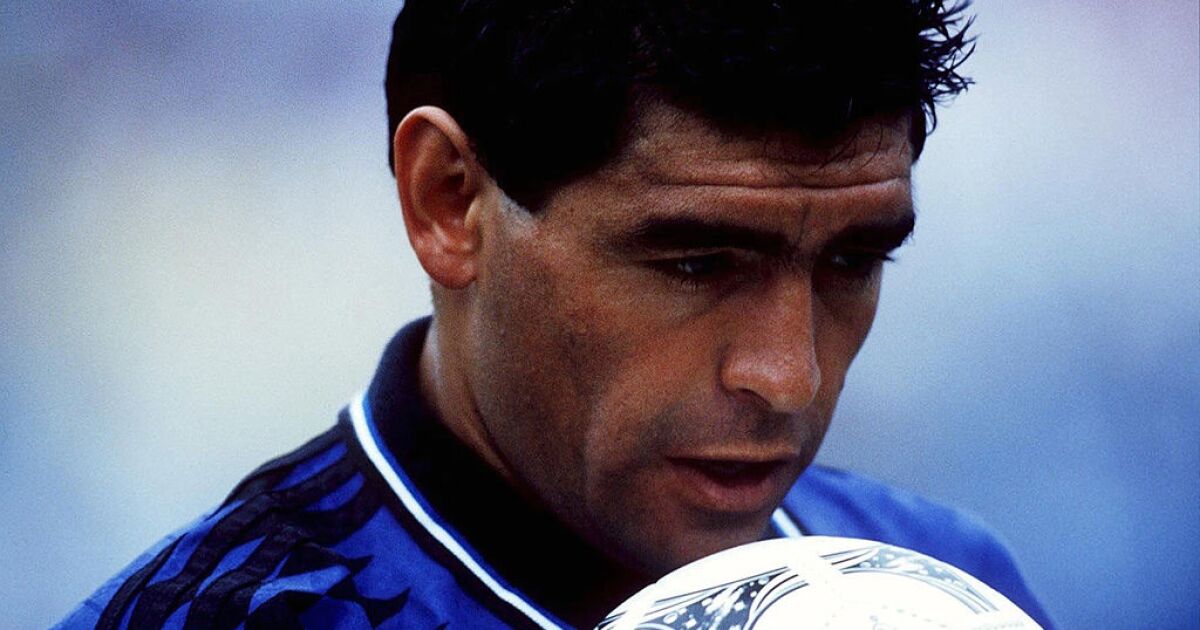 With the albiceleste jacket he cried in anger when he received the medal of runner-up in the 1990 World Cup in Italy. He played two other world cups: Spain-1982 and the United States-1994, when he uttered his phrase “they cut my legs off”, after giving him a positive doping control for ephedrine, in the midst of a football rebirth. It cost him a 15-month suspension, the second of his life.

Later, as a coach, he wanted to transmit his mystique to the Albiceleste. He led the national team between 2008 and 2010 until the World Cup in South Africa, with Lionel Messi on the pitch, but his fate was sealed with a tough 4-0 defeat by Germany in the quarterfinals.

Index hide
1 The ball does not get dirty
2 Phoenix
3 His children, another roller coaster

The ball does not get dirty

Maradona played 676 games and scored 345 goals in his 21-year career, between the national team and the clubs.

The return was in the Seville of Spain (1992-1993) and from there the return to Argentina with a brief stint at Newell’s Old Boys in 1993. Then the 1994 World Cup and the second sanction would come, until the return to his beloved Boca, where he finally hung up the boots on October 25, 1997, five days before his 37th birthday.

In a memorable farewell in 2001, in a ‘Bombonera’ full of fans, Maradona alluded to his addictions: “I was wrong and I paid, but the ball is not stained.”

Maradona was more than that player “with the white glove on his foot, on the side of his heart,” as rocker Andrés Calamaro described it.

Indomitable, he confronted the power of world football, challenged the establishment, embraced leaders of the Latin American left, had a friendship with Fidel Castro, tattooed Che Guevara, invited Arab sheikhs, and is the idol of legendary figures of universal sport.

“It was impossible for this boy (Diego) to finish well. At 18 he could not walk in Africa. A plane stopped because it was full of people on the runway. 1981, when there was no Internet, cell phone, nothing. It surpasses any barrier of the human, the normal. And I think it pays the consequences of all that, “recalled this year the former player Hugo Perotti, Maradona’s teammate in the youth team, the oldest and Boca champion in 1981.

Read:  This is the $ 22 million home Mariah Carey comes to in Aspen

In 2000, he had a heart attack due to an overdose in the Uruguayan resort of Punta del Este. A long treatment would come with going back and forth to Havana, away from the cameras. At 100 kilos, another heart and respiratory crisis surprised him in 2004 in Buenos Aires and put him on the brink of death.

He recovered. He had surgery on his stomach to lose 50 kilos until he returned a year later as a successful television host. In 2007, excesses in alcohol consumption forced two hospitalizations with toxic hepatitis. He was taken to a psychiatric hospital. He came out again.

Operated on the knees and with a cane, he assumed in 2019 in his country the leadership of a depressed Gimnasia y Esgrima La Plata.

His children, another roller coaster

With the security that gave them having been his “only daughters” for 25 years, Dalma and Giannina were the ground wire for Maradona, but also his harshest criticisms. Born in 1987 and 1988, his mother, Claudia Villafañe, was the adolescent girlfriend of ‘Pelusa’. After 24 years they got divorced and in 2020, they are still in tough litigation.

The last child to arrive was Diego Fernando, who he had in 2013 with his ex-girlfriend Verónica Ojeda.

But Maradona was adding descendants. In 2014, he recognized Jana, born in 1996 and daughter of Valeria Sabalain, and in 2016, after 29 years of rejecting the bond, he admitted among his offspring Diego Junior, born seven months before Dalma and son of the Italian Cristina Sinagra.

In 2019, his lawyer Matías Morla affirmed that he had three more children in Cuba, yet to be recognized. “There would be three missing for the team of 11, you can,” the spicy Giannina joked on Instagram.