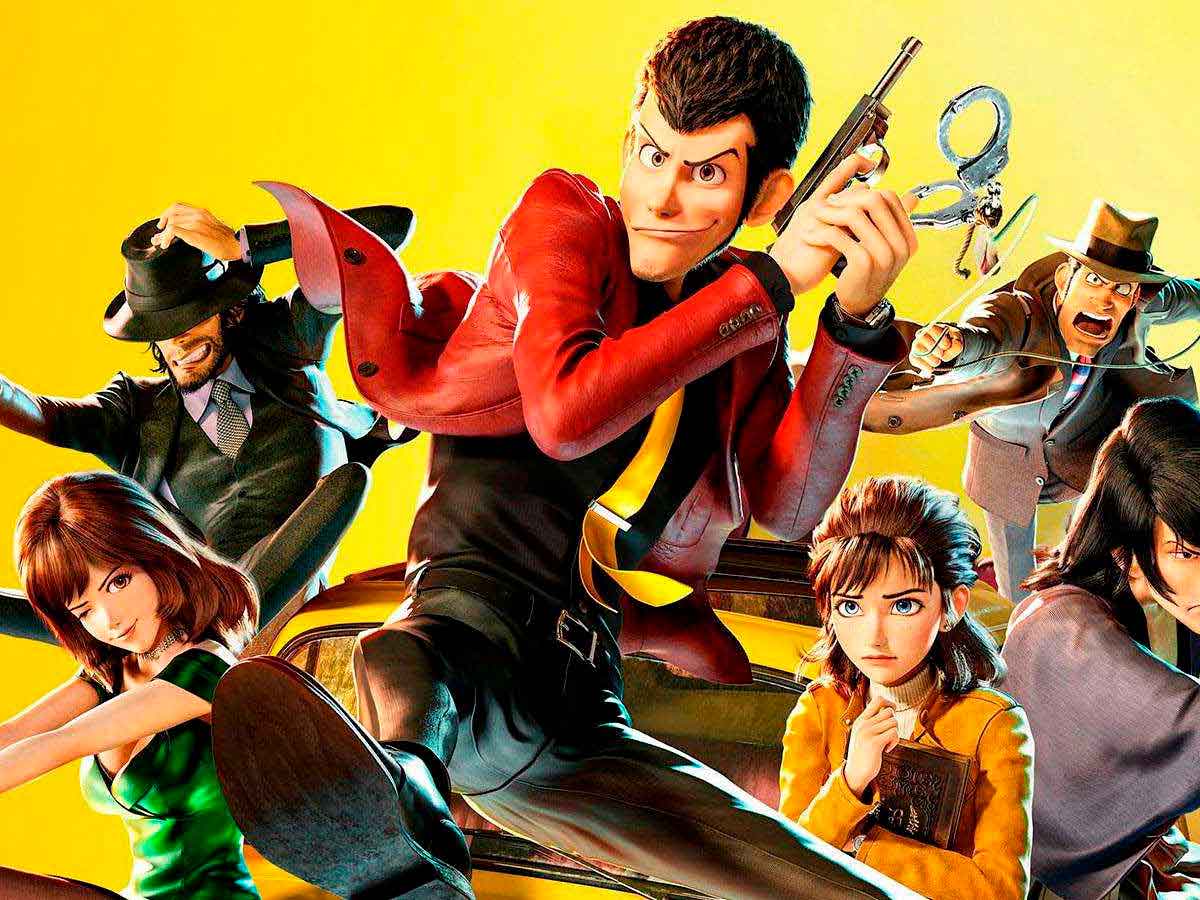 We analyze in Cinemascomics the Blu-Ray Collector’s Edition of Lupine III: The First, the 3D computer animation adaptation of the acclaimed manga created by Monkey Punch

In Cinemascomics we have analyzed the domestic edition of the Blu-Ray Collector’s Edition of Lupine III: The First, the tape directed by Takashi Yamazaki (Parasite. Part 1 and 2, Stand by Me Doraemon) and with a script signed by the filmmaker himself, based on the work created by Monkey Punch. The film, the first adventure of the charismatic thief created entirely using 3DCG animation, participated in the Annecy Festival, in the Official Selection feature films in competition, in 2020.

The luxurious collector’s edition of the blu-ray, whose box design recreates Bresson’s Diary, contains three discs, with the animated feature film in HD quality and also on DVD, as well as a Blu-Ray disc with all the contents additional; separated into four flaps that also includes a 96-page booklet, 5 special illustrations and a business card. Regarding the sound tracks, it has audio in Spanish, Catalan and Japanese (5.1 DTS HD). In addition, it has subtitles available in Spanish and Catalan. The studios in charge of the feature film are TMS ENTERTAINMENT CO., LTD. and MARZA ANIMATION PLANET INC.

The charismatic thief Arsene Lupine III teams up with a woman named Laetitia, a young archeology lover, to try to find and steal Bresson’s Journal, a treasure that even her legendary grandfather Arsene Lupine could not appropriate. This adventure will take Lupine and his colorful team to travel the world and reveal a Nazi conspiracy; while, as is customary, they will also have to escape from the police and try to save the world.

In this way, we are going to analyze the collector’s Blu-Ray version of Lupine III: The First. We hope you enjoy the film as much as we have. In this way, we have set to work to discover everything that this spectacular domestic edition hides, free of spoilers and with abundant and interesting additional material, containing a beautiful booklet full of curious facts about Japanese production, all stored in one rigid cardboard box that imitates the Bresson Journal. So we start with the analysis.

They begin with the production process, explaining how the scene of the theft of Bresson’s diary was created; showing the animated storyboard, as well as the different animation phases, with the recreation of the characters, the 3D environment and the camera framing, in addition to outlining the textures of the clothes and hair of the characters. As the last phase, the adjustment of colors and the appropriate contrast and lighting is made. They end up comparing the different phases with the final scene presented in the film. They continue with the scene of the fall of Laetitia and the representation of the Eclipse, showing the same route when recreating them.

In turn, they show us the creation of the 3DCG animation, where a video is developed joining all the storyboard drawings, the characters and other elements of the scene are placed within a 3D environment, and the camera frame is decided, making a recording with real people as a reference for the movements of the characters and achieve facial animation. Finally, they compare it to the whole scene. In addition, they show us how the lighting and composition of Laetitia’s apartment, the museum and other scenes in the film were created.

Yellow Carpet Event (1 minute): We witness how it was the premiere in theaters in Japan, on November 11, 2019, at the Toho Cinema Roppongi, where they laid a yellow carpet, instead of the characteristic red, and the director and the directors attended the premiere. main voice actors of the film.

Opening Textless: You can enjoy the opening sequence of the movie, animated in 3DCGI, without credit titles.

Interview with the director and cast (34 minutes):

They begin with a special interview with Kanichi Kurita and Daisuke Namikawa, where the former lends his voice to Lupine III and the latter to his partner Goemon Ishikawa. In this way, they speak of the popularity of the original manga, of the 40-year-old film, the Castle of Cagliostro, in which Yasuo Yamada (voice of Lupine III until his death in 1995) and the consecrated director Hayao Miyazaki (The Journey Chihiro) worked together. In addition, they assure that it is the first film to be released in theaters in 23 years, the last being Lupine III: Dead or Alive (1996).

They go on to say that the chase scenes between Lupine III and Zenigata are very funny, but they also talk about their first experience with Lupine III and the original creator and their anecdotes with him, indicating that Monkey Punch passed away in April 2019 and could not see the finished and released tape. Along with this, they also talk about the experience of lending the voice to their characters, where Kanichi Kurita has been the voice of Lupine III since 1995. All of them without forgetting that it is the first 3D film with complete digital animation to be made of the character, so they talk about their opinion about this style and how was the pre-recording of their dialogues, recording their phrases 2 years before the premiere, since they used their phrases for the digital animation of the characters. They end up talking about the guest voice actors.

Below we see the special interview with Suzu Hirose and Tatsuya Fijiwara, where the former lends her voice to Laetitia, while Fujiwara plays Gerarld. In this way, the actress talks about her first impression with the character of Lupine, to which he adds that he was very surprised with what can be done today through digital animation.

But they also talk about their respective roles, how they see this first Lupine in 3DCG, what their favorite characters are, their co-stars in the dubbing of the film and the final message of the actors.

Finally, we also have a special interview with director Takashi Yamazaki, who talks about his first meeting with Lupine III, how he was offered to be the director, the script of the film, the casting, the conscious perception of the 3DCG, the the way the characters were drawn, the appeal of Lupine III and ends with a final message.

96-page booklet, with index, summary of the history and description of the characters of Lupine III (Kanichi Kurita), Daisuke Jigen (Kiyoshu Kobayashi), Goemon Ishikawa (Daisuke Namikawa), Fujiko Mine (Miyuki Sawashiro), Inspector Zenigata (Koichi Yamadera), Laetitia (Suzu Hirose), Lambert (Kotaro Yoshida), and Gerarld (Tatsuya Fujiwara). We also see the evolution of the design of the characters, Bresson’s diary, Lupine III’s car, the Eclipse, the seaplane, the relics of Arséne Lupine, the weapons that appear in the film and the rest of the vehicles. In turn, we see the designs of the scenarios, sketches, storyboards, extracts of the original illustrations by Kazuhide Tomonaga, the comparison of modifications in the storyreel of the car chase and the third test, storyboard of the opening and the technical sheets and artistic.

Reproduction of the mythical mocking business card of Lupine III that he gives during his robberies.

Set of 5 special illustrations for this edition, with a size of 10x15cm., And focused on Lupine II and the rest of the main characters in the story.

Finally, we hope you enjoy purchasing the Collector’s Blu-Ray from Lupine III: The First, now also available in Basic DVD and Blu-Ray (amaray box), thanks to Select Vision; to take it home and watch it as many times as you want, both in the original version and dubbed into Spanish and Catalan.

Description : Bresson Diary is the only treasure that legendary white-collar thief Arsene Lupine was unable to steal in his entire life. According to legend, whoever is able to unravel its secrets will be able to acquire an immense fortune. After setting his eyes on that legendary target, Lupine meets Leticia, a young woman who loves archeology, and the two decide to work together to solve the mystery. However, Lambert, an investigator for a secret organization who is also searching for the Bresson Diary, and Gerald, a mysterious man who pulls the strings of the organization, stand in their way. What is the surprising truth behind Bresson Diary? From Paris to Mexico to Brazil… A treasure hunt begins on an unprecedented world scale!

Experts reveal that technology has created new skills in children