Bullfrag
Home Technology Logitech Key-To-Go is the thin and light wireless keyboard with which you... 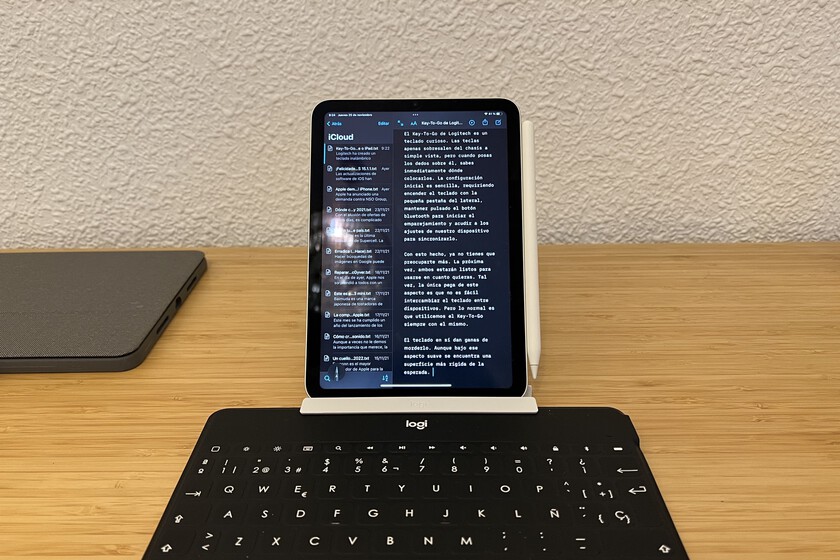 Logitech has created a very slim wireless keyboard called Key-To-Go. Designed for iPhone and iPad, it is also compact, light and robust. A keyboard on which to type is a delight, once you get used to it. We have been testing it for a few weeks now and this is our verdict.

A keyboard designed for Apple products


The Logitech Key-To-Go is a curious keyboard. The keys barely protrude from the chassis to the naked eye, but when you put your fingers on it, you know immediately where to put them. The initial configuration is simple, requiring to turn on the keyboard with the small tab on the side, press and hold the bluetooth button to start the pairing and go to the settings of our device to synchronize it.

With this done, you don’t have to worry anymore. Next time they will both be ready to be used as much as you want. Perhaps the only downside to this aspect is that it is not easy to swap the keyboard between devices. But the normal thing is that we always use the Key-To-Go with the same one.

The keyboard itself makes you want to bite it. Although under that soft aspect there is a more rigid surface than expected. Starting to write requires adapting to it. The low travel of the keys means having to use a greater force than usual to register the keys.

One of the keys to the Key-To-Go is that it has a row of function keys. Not all keyboards of this type They have it, but here Logitech has decided to incorporate shortcuts and shortcuts common in a conventional computer.

Read:  What is better for your health, being an early bird or a night owl? | Life

Thus, we have a lock key, brightness control, hide the keyboard, search in Spotlight, multimedia control, sound and access to home. All this makes typing and operating the device much more comfortable.

A keyboard to travel with

We like this keyboard from Logitech. It is designed for those users who want to travel light, no need to carry a laptop with you. Writing on it with the iPhone or iPad resting on the dock is quite comfortable. And the balance is complete, it does not feel like the iPad is going to fall backwards.

We tested with an iPad mini placed vertically, as well as a 10.5-inch iPad Pro horizontally. Both quite stable. Where we do see problems it is when it comes to placing it on your lap, where instability can put the device on the ground and we do not recommend it. If we are traveling by bus, train or plane, it is best to unfold the tray and support the system there.

We have also tested it with an Apple TV, although as we said, device sharing is not easy. And that makes us resort to writing via dictation or Siri on this device in the end. The experience here is not recommended.

One may think that these types of accessories are not designed to write long texts. If anything, a message, more or less long notes. Notes from a short class may. But in the end, you take a liking to the keyboard and end up typing more than you thought. For example, this same analysis is written with Logitech’s Key-To-Go.

The only thing we miss is a mouse. But of course, there we are already approaching the field of the Combo Touch keyboard also from Logitech, at a much higher price. The choice is ours.

This product has been released for testing by K-Tuin. You can check our business relations policy.